Day three of Celebrity Blogger Week, brings us the encore blogging performance of Hugo Olaiz, who joins us for his second year in a row. A man of many talents, as you can see from the accompanying picture, Hugo can cook and sing opera at the same time! We assume he's not lip synching but we have yet to verify this. 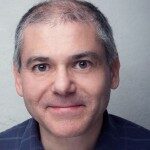 Hugo Olaiz is associate editor for Latino/Hispanic resources at Forward Movement. Hugo grew up in La Plata, Argentina — a country where provinces and cities are sometimes named after saints. After completing a degree in literature and classics, Hugo spent two years on mission in Paraguay. He later moved to the U.S. to do graduate studies in Spanish, linguistics, and translation, pursuing a Ph.D. in Hispanic linguistics at Berkeley, California. He later moved to Salt Lake City, Utah, where he became the news editor for Sunstone magazine. Upon moving to Carrboro, North Carolina, Hugo stumbled into an underground network of home-based businesses — hair styling, sewing, cooking — all run by Mexican immigrants; these contacts led him into Latino ministry and advocacy in the Diocese of North Carolina. Hugo lives in Oxford, Ohio, with his husband John-Charles Duffy and an aging beagle mix named Patches. In his spare time, he loves to entertain friends, edit Wikipedia entries, and watch opera clips on YouTube.

1. What is the single most inspirational place you have ever visited (besides your own church)?
The ruins of the Jesuit Mission of Trinidad, in Paraguay. Little angels carved in the stone play musical instruments and sing praises to God there since 1718.

2. Share one unusual fact about yourself with the Lent Madness public. 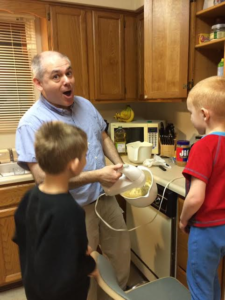 I am celiac and abstain from gluten—mostly! But I do take regular Eucharistic bread.

3. Of the saints you've written about for Lent Madness 2017, what most inspires you? What most disturbs you?
Most inspiring: Isaac the Syrian, who after serving for only five months as Bishop of Niniveh, he famously stated: “Do you know what, you guys? Being a bishop sucks. I’m going back to my hermitage.” Most disturbing: On the night of March 20, 1393, King Wenceslaus IV of Bohemia ordered John of Nepomuk thrown into the Vltava river, where he drowned. The reason? John had appointed as abbot of Kladruby a candidate the King didn’t like.

4. If you could get just one tattoo this Lent, what would it be? (besides the Lent Madness logo and "none" is not an option).
An inscription over my very large belly: “To obey is better than sacrifice, and to heed than the fat of rams” (1 Samuel 15:22).