Looking for a way to promote Lent Madness in your congregation's newsletter or local newspaper? You're in luck! Below is a FREE article about Lent Madness 2017 -- no strings attached (well, besides the harp strings of the heavenly angels).

But that's not all! The Supreme Executive Committee is also tossing in widgets for your parish or personal websites ABSOLUTELY FREE. Click here to download your FREE widget. If you have no idea what a "widget" is, just ignore this paragraph.

Of course, while you can purchase a copy of the Saintly Scorecard or Bracket Poster, there is no purchase necessary to participate in Lent Madness. You can even download the 2017 Bracket for...wait for it...FREE!

Proving, once again, that sometimes the best things in Lent are free.

Are you looking for something fun to focus on? Are you longing for inspiration and joy? For the eighth year running, people of faith are gearing up 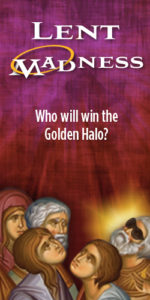 for Lent Madness, the “saintly smackdown” in which thirty-two saints do battle to win the coveted Golden Halo during the season of Lent.

With its unique blend of competition, learning, and humor, Lent Madness allows participants to be inspired by the ways in which God has worked through the lives of saintly souls across generations and cultures.

Based loosely on the NCAA basketball tournament, this online devotion pits saints against one another in a bracket as voters choose their favorites throughout the penitential season of Lent. This year’s competition begins on “Ash Thursday,” March 2.

This year Lent Madness features an intriguing slate of saints ancient and modern, Biblical and ecclesiastical. 2017 heavyweights include Joan of Arc, Martin Luther, Florence Nightingale, Stephen the Martyr, and Sarah the Matriarch. It also includes several intriguing matchups including Augustine of Hippo vs. Augustine of Canterbury (All-Augustine Anarchy); Fanny Crosby vs. G.F. Handel (Battle of the Bands); and Joseph Schereschewsky vs. Nikolaus von Zinzendorf (Clash of the Consonants).

The full bracket is online at the Lent Madness website www.lentmadness.org and, while not necessary to participate, you can order the Saintly Scorecard: The Definitive Guide to Lent Madness 2017 at www.forwardmovement.org. This companion guide includes biographies of all 32 saints, a full-color bracket, information about how to fully participate, and a series of Pocket Lent trading cards.

The formula has worked as this online devotional has been featured in media outlets all over the country including national television, the Washington Post, NPR, USAToday, and even Sports Illustrated (seriously). More importantly thousands of people have been inspired by the saintly stories of those who have come before us in the faith. 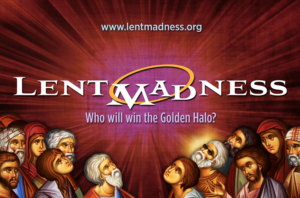 Eleven “celebrity bloggers” from across the country have been tapped to write for the project: the Rev. Amber Belldene of San Francisco, CA; the Rev. Laurie Brock of Lexington, KY; Anna Fitch Courie of Ft. Leavenworth, KS; Dr. David Creech of Morehead, MN; the Rev. Megan Castellan of Kansas City, MO; Neva Rae Fox of Somerville, NJ; the Rev. David Hansen of Woodlands, TX; Beth Lewis of Minneapolis, MN; Hugo Olaiz of Cincinnati, OH; Dr. Derek Olsen of Baltimore, MD; and the Rev. David Sibley of Manhasset, NY. Information about each of the celebrity bloggers and the rest of the team is available on the Lent Madness website.