Augustine of Canterbury vs. Scholastica

Tightly contested race yesterday! But with a late charge, Raymond Nonnatus took down Moses the Black 51% to 49% (the SEC has certified the election). With this victory, exactly half the Elate Eight is set. Joining Raymond will be Stephen, Florence Nightingale, and Mechtild of Magdeburg. But that means there are still four spots up for grabs!

Today, Augustine of Canterbury faces Scholastica for the fifth spot in the subsequent round. To get here, Augustine defeated his namesake from Hippo (you do recall the Battle of the Augustines, right?) and Scholastica bested Macrina the Younger. 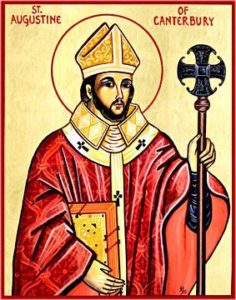 Augustine of Canterbury lived in Italy and England more than 14 centuries ago. Most of his sayings or quotes have failed to pass down through the years. Nonetheless, his actions more than his words made an everlasting impact on English history and worldwide Christianity. Along the way, he garnered many monikers during his life.

Despite a few shaky starts, Augustine and his crew of 40 arrived on Isle of Thanet, located off the southeast coast of England, in 597 AD. They were greeted with hospitality and kindness by the pagans and the few Christians living there at the time.

Pagan King Ethelbert, married to a Christian queen, told the newcomers at their arrival: "Your words are fair, but of doubtful meaning; I cannot forsake what I have so long believed. But as you have come from far we will not molest you; you may preach, and gain as many as you can to your religion." A few short years later, King Ethelbert turned his back on his pagan ways and converted to Christianity.

It is believed that Augustine carried with him on his long treacherous journey a silver cross and an image of Jesus Christ painted on a board, which is considered Canterbury’s first icon. Alas, it has been lost in the ages.

Augustine's days in England were dedicated to evangelizing, establishing churches and schools, celebrating the sacraments, and baptizing new Christians. Christmas Day 597 was a particular significant celebration as Augustine is reported to have baptized thousands of people on that day.

One of the few quotes attributed to Augustine that survived contained the strong words he is recorded to have strongly communicated to the Celts, a tribe living in England: “If ye will not have peace with the brethren, ye shall have war from your enemies; and if ye will not preach the way of life to the English, ye shall suffer the punishment of death at their hands.”

No matter what he is called or how he is known or what he has stated, the marks of Augustine of Canterbury’s witness to faith remain evident throughout the English Isles.

Augustine died on May 26, in either 604 or 605, at his beloved Canterbury, England where he was buried.

Although Scholastica is considered the patron saint of nuns and in the vanguard of female monasticism, there is only one anecdote recorded about her: the singular story of her miraculous detainment of her twin brother St. Benedict with a storm, which is recorded in Chapter 33 of Gregory’s Dialogues.

The Nun, hearing this denial of her brother, joined her hands together, laid them on the table, bowed her head on her hands, and prayed to almighty God.

Lifting her head from the table, there fell suddenly such a tempest of lightning and thundering, and such abundance of rain, that neither venerable Benedict, nor his monks that were with him, could put their heads out of doors. The holy Nun, having rested her head on her hands, poured forth such a flood of tears on the table, that she transformed the clear air to a watery sky.

At which point, Benedict asks, “God forgive you, sister; what have you done?” She answered: “I asked you a favour, and you refused it me: I asked it of Almighty God, and he has granted it me.” And they spent the evening together in theological conversation, as she desired.

Much is made of this anecdote in establishing both her relationship with her brother and also her divine favor. In 1866, Father Alban Butler wrote in his Lives of the Saints, “The short prayer by which Saint Scholastica gained this remarkable victory over her brother, who was one of the greatest saints on earth, was doubtless no more than a single act of her pure desires, which she continually turned toward, and fixed on her beloved [Lord]. It was enough...to move Him so suddenly to change the course of the elements in order to satisfy her pious desire.”

Known for her scholarliness, she is often depicted with a book and as the patron of reading. Perhaps her care for scholars inspired the St. Scholastica Day riot of 10 February 1355, one of the more notorious events in the history of Oxford, England. Beginning as a bar brawl, the riot lasted two days and took many lives. When the riot ended, academic institutions claimed greater privileges over the town.

Scholastica is the patron saint of nuns, and is invoked both against storms and for opportune rain. She is also, for no apparent reason, the patron of convulsive children. But I’m sure that, because this is the Internet, someone will make the reason plain in the comments.

UPDATE: The SEC noticed an irregular surge of votes for Scholastica around midnight. Well over 6,000 votes were found to be cast irregularly in an attack using bots around the world. We have removed what we believe to be the correct amount of votes, and will continue to monitor this race. One person, one vote. If you break this rule, your votes will be removed and you will be cast off into the outer darkness of Lent Madness.

Augustine of Canterbury vs. Scholastica