We started this little competition on Ash Thursday with 32 saints. After today's vote, the field will have been whittled down to 16 remaining saintly souls. But in order to get there we must first make it through the Battle of the Bands as Fanny Crosby faces G.F. Handel. Who will retain the last seat in the Saintly Sixteen before the music stops? Well, that, as always, is up to you.

Yesterday, in the tightest race of Lent Madness 2017, Sarah the Matriarch barely laughed away a valiant challenge from Elizabeth Ann Seton 51% to 49%. See, what have we been saying all along? Your vote counts! 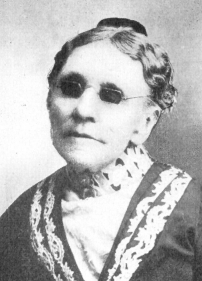 Fanny Crosby wrote more than eight thousand sacred texts in the late nineteenth and early twentieth centuries. Referred to as the Queen of Gospel Song Writers, she is arguably the most prolific author of American hymns and gospel songs.

Born in 1820 in Brewster, New York, Fanny caught a cold as an infant and developed inflammation in her eyes, which resulted in full-scale blindness. She would later remark, “It seemed intended by the blessed providence of God that I should be blind all my life, and I thank him for the dispensation. If perfect earthly sight were offered me tomorrow, I would not accept it. I might not have sung hymns to the praise of God if I had been distracted by the beautiful and interesting things about me.” Around her fifteenth birthday, Crosby enrolled at the New York Institution for the Blind, and she began to write hymns and gospel songs.

Crosby attended multiple churches, including an Episcopal church, but she is most closely identified with the Wesleyan Holiness movement. She formally joined Cornell Memorial Methodist Episcopal in 1887. Her hymn texts became so popular that composers of that era would seek her out to find lyrics for their melodies—a reversal of the typical hymn-writing process. Her best-known text, “Blessed Assurance,” was written in this way during a visit to Phoebe Knapp’s home after Crosby heard the tune for the first time.

Crosby described her hymn-writing process by saying, “It may seem a little old-fashioned, always to begin one’s work with prayer, but I never undertake a hymn without first asking the good Lord to be my inspiration.” Crosby could often write six or seven hymns a day, rivaling the output of prolific hymn writers Isaac Watts and Charles Wesley.

While known as a hymn-writer, Crosby was committed to helping others, often donating the proceeds from her writing to rescue missions around New York City. Known as “Aunt Fanny” by the numerous missions she contributed to around the city, she died in 1915. At her request, her tombstone reads: “Aunt Fanny: She hath done what she could; Fanny J. Crosby.”

Collect for Fanny Crosby
O God, the blessed assurance of all who trust in you: We give you thanks for your servant Fanny Crosby, and pray that we, inspired by her words and example, may rejoice to sing ever of your love, praising our Savior; who lives and reigns with you and the Holy Spirit, one God, now and for ever. Amen.

George Frideric (or Frederick) Handel was born on February 23, 1685, in Halle, Germany. Handel showed a propensity for music at an early age. However, his father forbade him from dabbling in music, dreaming instead that his son would one day become a civil attorney. Handel did not listen. It is said that Handel (or his mother) smuggled a small clavichord into his room, and he practiced in secret.

On a visit to see his uncle (who was a valet for a duke), Handel surprised the duke with his skills on an organ. The duke persuaded Handel’s father to allow his son to continue studying music. Handel rapidly mastered the pipe organ, harpsichord, oboe, flute, and violin. That mastery led to a prolific writing life that included 42 operas, 29 oratorios, more than 100 cantatas, trios, duets, arias, chamber music, a large number of ecumenical pieces, odes and serenatas, and 16 organ concerti.

Handel initially struggled to establish himself, beginning his career as a church organist and writing pieces that are lost to the world today. Then he became a violinist, supplementing his income as a music teacher. His fame began to grow when he transitioned his main instruments to the organ and harpsichord. Following stints as a musician, he began a foray into composition. His first operatic debut, Almira, was wildly popular. Following two more operas in Hamburg, Handel became dissatisfied with the German music scene. He traveled to Italy and ultimately made his home in London.

He was commissioned to write an oratorio about the Bible, and in 1742, Handel’s Messiah debuted on the New Music Hall Stage in Dublin, Ireland. Often considered Handel’s most famous work, Messiah is frequently classified as Christmas music, out of a mistaken belief that it commemorates Christ’s birth. Messiah was in fact written as an ode to all of Christ’s life—annunciation, nativity, passion, and resurrection—proclaiming salvation for all who believe.

Handel died on April 14, 1759. At the time of his death, Handel was completely blind. His life was celebrated in a state funeral with full honors at Westminster Abbey. Handel is honored with a feast day in the Episcopal, Lutheran, and Methodist churches on July 28.

Collect for G.F. Handel
Almighty God, beautiful in majesty and majestic in holiness, you gave to your musician George Frederick Handel grace to show forth your glory in music: may we also be moved to sound out your praises as a foretaste of your eternal glory; through Jesus Christ our Savior; who lives and reigns with you and the Holy Spirit, one God, for ever and ever. Amen.