The Saintly Sixteen continues with an intriguing matchup between two fascinating figures: Florence Nightingale and Henry Beard Delany. To make it this far, Flo bested Anselm of Canterbury while Hank dispatched Aelred of Rievaulx. But really, the choice between Nightingale and Delany is like night and day. Or at least you can't spell "Nightingale" without "night" or Delany without "day." So there's that.

Yesterday in the opening battle of the Saintly Sixteen, Stephen defeated Henry Budd 59% to 41% to become the first saint of Lent Madness 2017 to make the Elate Eight. Could this be the year of the Biblical martyr? Only time...and many more votes to be cast...will tell.

Remember, this is the last vote of the week. So, vote wisely and then consider hibernating for the next 48 hours to deal with the often debilitating effects of Lent Madness Withdrawal. We'll be back first thing Monday morning as the Saintly Sixteen continues with Odo of Cluny taking on Mechtild of Magdeburg. 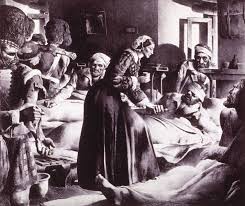 Florence Nightingale stood out as a nurse and as an individual because she saw both the art and science of caring for people. As a social justice warrior, Florence not only spoke and wrote about what was wrong with the world and the disparities she experienced, she took ACTION for a way forward to improve the well-being of others. Florence was unique because #ShePersisted in a time when women were subordinate to men (especially in the medical profession); #ShePersisted despite being told by her well-to-do family to settle down and get married; #ShePersisted in improving the sanitary conditions of hospitals; and #ShePersisted to influence the health of the world long after her death through her treatise on public health practice in communities and segregated portions of society.

Florence had a unique ability to communicate how nursing was both an art and science. The care of individuals and communities requires a precise application of scientific and technical skills, yet it also requires a heart and love for your fellow man that cannot be measured.

Florence once said, “Nursing is an art: and if it is to be made an art, it requires an exclusive a devotion, as hard a preparation, as any painter’s or sculptor’s work; for what is the having to do with dead canvas or cold marble, compared with having to do with the living body, the temple of God’s spirit? It is one of the Fine Arts: I had almost said the finest of the Fine Arts.” Florence saw the body as God’s art and her science was to care for it.

And yet, Florence was humble: “If I could give you information of my life, it would be to show how a woman of very ordinary ability has been led by God in strange and unaccustomed paths to do In His service what He has done in her. And if I could tell you all, you would see how God has done all, and I nothing.”

To separate God from the nursing care that Florence provided would have been unfathomable to her. Where Florence joined in the practice of nursing with her patients, there she found God. In the practice of nursing care, Florence found an unwavering love of her fellow man, the deep belief in the sanctity of life, and an unswerving conviction that we are all made equal. Florence glimpsed God when she cared for her patients. Through her actions, she demonstrated God’s commandment to “love your neighbor as yourself.” Isn’t this what God is teaching us? It is at the intersection of individuals caring for one another that God can be found, for this is love of our fellow man. With God, #ShePersisted. 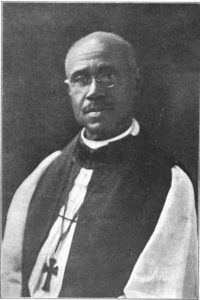 Henry Beard Delany was the first African-American bishop of the Episcopal Church. But he was more than just a “first.” A man of deep piety and compassion, he worked tirelessly for the education and rights of African-Americans in the Carolinas and across the South in the days of Reconstruction and Jim Crow.

Born into slavery on a Georgia plantation the youngest of eleven children, he was seven-years-old at the time of “the Surrender.” When he first heard the news that the war was over, he was working in the kitchen, wearing an apron with a single button at the neck—the standard garb for slave boys at the time. Upon hearing of his liberation, he ran around the house, the apron fluttering behind him like a cape crying “Freedom! Freedom! I am free!”

The family moved to Florida, and began a new life for themselves. Delany was raised in the Methodist church, and was fervent in his faith even at a young age. At some time in his teen years, he went to make his first communion, but could not do so. He was overcome by a sense of his own unworthiness. He spent the next week in fasting and prayer and, at the end of that time, physically and spiritually exhausted, he experienced a vision: where he knelt in prayer, he saw about him twelve men in vestments kneeling in a semi-circle around him. From there he seemed to pass into a church filled with beauty and music and found himself singing the hymn “I am so glad that Jesus loves me.”

When Delany was in his twenties, a white Episcopal priest who had come to know the family said to him, “Young man, you should go to college.” Delany had been shocked at the suggestion and the opportunity to do so, and immediately embraced the offer. There were strings attached—since the college was a school founded by the Episcopal Church, Delany would have to become an Episcopalian which he did. Now, the Mock family had owned the Delanys in pre-emancipation Georgia, and they had broken Georgia law by teaching all of the children how to read and write. Nevertheless, when he arrived, Delany—an accomplished bricklayer and musician—had very little formal schooling. St. Augustine’s School in Raleigh had to create a special grade to accommodate him until he could be brought up to the level of the other students. He soon became one of the top students in the school, blessed by both intelligence and a charming personality.

Ordained a priest and appoint Vice Principal of St. Augustine’s School, Delany leveraged his position for the good of those around him. At the beginning of every November, he would begin assembling baskets for Thanksgiving feasts for those who did not have enough and would be determine who in the neighborhood was in need of them. He maintained a portion of the college’s property for a cemetery for former slaves who could not pay for burial.

Despite his arduous work schedule at the school and his later efforts as Suffragan Bishop for Negro Work, his children recalled that every night he would spend time reading Bible stories to them before bed. Too, he shared with them his own passions and pursuits; his daughter Sadie writes lovingly of him teaching them astronomy, pointing out to them all the planets and constellations.

After his death, Delany was remembered by the church as a teacher, mentor, evangelist, and champion for the downtrodden. His family remembered him as a calm and gentle man, and celebrated his birthday every year with a feast of his favorite foods: chicken and gravy, rice and sweet potatoes, macaroni and cheese, and much more.

Henry Delany: image from public domain book, History of the American Negro: North Carolina Edition, edited by A. B. Caldwell (Atlanta: A. B. Caldwell Publishing), 1921, p. 146.