Thirty-four consonants between them! That's what we're talking about in the long-anticipated Battle of the Consonants between Samuel Isaac Joseph Schereschewsky and Nikolaus von Zinzendorf. You have 24-hours (or 10 fewer hours than consonants) to decide this tongue twister of a matchup.

With only three battles left in the Round of 32, we will be kicking off the Saintly Sixteen on Thursday. The field is narrowing, folks! In case you missed it, on Friday Scholastica schooled Macrina the Younger 64% to 37%. But that's old news. So let's get on with it, shall we?

But first, check out this article about Lent Madness written by Emily Miller of Religion News Service that made its way into various secular newspapers over the weekend.

Oh, and we challenge you to write a limerick based on today's matchup. Just because. Leave your best attempt in the comment section. 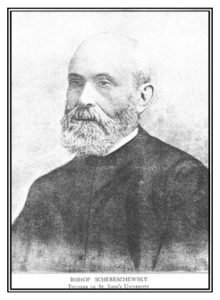 Born in Russian Lithuania in 1831 and raised by his half-brother, Samuel Isaac Joseph Schereschewsky was groomed to become a rabbi. During his theological education, he received and read a copy of the New Testament in Hebrew. Becoming convinced of Christ’s divinity, Schereschewsky moved to Germany to continue his studies of Christianity and theology before ultimately immigrating to the United States in 1854. He celebrated his baptism as part of a Baptist worship community in New York the following year.

After falling in with the Baptists, he felt led to investigate the Presbyterian experience, and eventually made his way to the Episcopal Church, enrolling at the General Theological Seminary in New York City. In 1859, Schereschewsky offered himself as a missionary to China. The Foreign Committee of the Episcopal Church agreed to his proposed mission and consecrated him a deacon, and Schereschewsky jumped a steamer to Shanghai.

Schereschewsky was a stone-cold genius with language—to call him a polyglot is an understatement. By young adulthood, Schereschewsky could speak Yiddish, Hebrew, German, Polish, and Russian with absolute fluency. When he arrived in China, he began translating the Bible into the vernacular of the people to whom he was ministering. Once the Bible was translated, he also translated The Book of Common Prayer into Mandarin. Schereschewsky’s ministry in China was so vibrant that the House of Bishops called him to serve as Bishop of Shanghai in 1877.

Schereschewsky fell ill after arriving in China. A degenerative neurological disease resulted in the resignation of his episcopate in 1883 and his return to the United States. Schereschewsky spent the final years of his life entirely paralyzed, except for one finger, which he used to painstakingly type out his translations of the scriptures. These translations were so accurate and understandable that they are still used today. By the time of his death, Schereschewsky had translated the word of God into Mandarin, Wenli, and Mongolian, as well as compiling a Mongolian-to-English dictionary.

Collect for Joseph Schereschewsky
O God, who in your providence called Joseph Schereschewsky from his home in Eastern Europe to the ministry of this Church, and sent him as a missionary to China, upholding him in his infirmity, that he might translate the Holy Scriptures into languages of that land: Lead us, we pray, to commit our lives and talents to you, in the confidence that when you give your servants any work to do, you also supply the strength to do it; through Jesus Christ our Lord, who lives and reigns with you and the Holy Spirit, one God, for ever and ever. Amen. 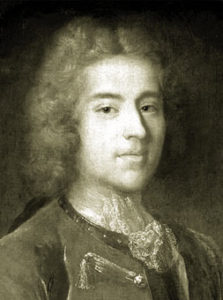 Nikolaus von Zinzendorf was a German poet, preacher, hymn writer, theologian, religious leader, and bishop. The phrase most closely linked with Zinzendorf is Unitas Fratrum or Unity of Brethren. The words have been associated with The Moravian Church since its inception.

Born into one of the great noble families of Austria in 1700, the young duke took a great interest in theology and religion. In 1716, he began his study of law at the University of Wittenberg in preparation for a career in diplomacy. Three years later, Zinzendorf departed the university and traveled throughout Europe. Upon acquiring a Saxony estate, Zinzendorf allowed the religious group Unitas Fratrum to settle on his land. There, the Moravian Covenant for Christian Living was born, reflecting a rich liturgical and devotional life. Zinzendorf said, “All of life becomes a liturgy, and even the most mundane task can be an act of worship.” Unitas Fratrum became the Moravian Church.

Zinzendorf was ordained a Lutheran minister in 1735 and consecrated a bishop in the Moravian Church in Berlin two years later. Regarded as a strong leader, Zinzendorf dedicated his personal funds and fortune to the work of the church, becoming a staunch advocate for ecumenism. In 1741, Zinzendorf and a group of companions arrived in the American colonies to minister to the Indigenous population and German-speaking immigrants. Inspired by their Christmas arrival, the missionaries named the new settlement Bethlehem. Zinzendorf preached the gospel to everyone he encountered—free people, indentured servants, slaves, and Indigenous peoples—including leaders of the Iroquois Nation, Benjamin Franklin, and other notable leaders in the colonies.

By the time Zinzendorf died on May 9, 1760, the Moravians had dispatched an astonishing 226 missionaries across the Americas and around the world to spread the good news of Jesus and his love. One of Zinzendorf’s best-known offerings is the Moravian Common Table Prayer: “Come Lord Jesus, be our Guest and let thy gifts to us be blessed.”

Collect for Nikolaus von Zinzendorf
God of new life in Christ, We remember the bold witness of your servant Nikolaus von Zinzendorf, through whom your Spirit moved to draw many to faith and conversion of life. We pray that we, like him, may rejoice to sing your praises, through Jesus Christ our Lord, who lives and reigns with you and the Holy Spirit, one God, now and for ever. Amen.