"It's not fair!" We sometimes hear such complaints about Lent Madness. And..of course it's not fair. Which is why we call this little devotion Lent MADNESS and not Lent FAIRNESS. Thus, we end up with matchups such as today's that pit a well-known Reformer of the Middle Ages against a lesser known late 19th, early 20th century Native-American convert to Christianity. So while all may be fair in love and war, all is decidedly not fair in Lent Madness.

Yesterday, to further illustrate this point, was the Battle of the Augustines aka Augustine Anarchy. Going into this matchup one thing was crystal clear: Augustine would emerge victorious. In this case Augustine of Canterbury bested Augustine of Hippo 57% to 43% to advance to the Saintly Sixteen.

And if you missed yesterday's epic edition of Monday Madness, you can watch it here. Tim and Scott discuss the week ahead and answer some very pertinent viewer mail. 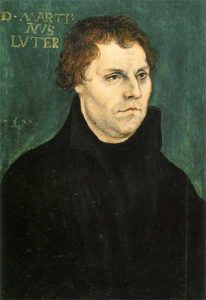 Just before the beginning of the twenty-first century, the Arts & Entertainment Network (A&E) compiled a list of the 100 most influential people of the millennium. A sixteenth-century former monk from a small town in Germany would have been very surprised to find himself ranked number three on this list!

Born in 1483, Luther’s parents encouraged him to study law. But in 1505, he was caught in a terrible thunderstorm while returning to the university from a trip home. Fearing for his life, Luther pledged to become a monk if his life were spared. He survived the stormy night and honored his commitment.

Luther served as a monk, university professor, and parish priest. As he studied, taught, and preached, he became increasingly distressed by what he saw as pernicious failures of the Roman Catholic Church. Among the most troubling were the selling of indulgences (paying to receive pardons for sins), a focus on vocation as being under the sole purview of those called to religious life, the insistence upon clerical celibacy, and the crippling lack of faith formation among the common people.

The posting of his 95 Theses on October 31, 1517, is commonly regarded as the beginning of the Protestant Reformation. Five hundred years later, we can clearly see his legacy. He was intent on making worship the center of the life of the Church, including excellent preaching and music, and focused his teaching and preaching on God’s grace. He admonished priests to teach parents how to make their homes the center of childhood faith formation by using his Small Catechism. Luther called for an end to corruption in the Church, especially through the sale of indulgences, and translated the Bible into the German vernacular, allowing common, literate people to read the word of God in their mother tongue.

His marriage to former nun Katarina von Bora and the lively home they created together offered a space for Luther and other scholars to debate around the kitchen table while enjoying Katarina’s generous hospitality. Martin Luther died in 1546, but his influence continues to echo mightily across new generations, as they discover his theology of a grace-filled God.

Collect for Martin Luther
Almighty God, gracious Lord, we thank you that your Holy Spirit renews the church in every age. Pour out your Holy Spirit on your faithful people. Keep them steadfast in your word, protect and comfort them in times of trial, defend them against all enemies of the gospel and bestow on the church your saving peace, through Jesus Christ, our Savior and Lord, who lives and reigns with you and the Holy Spirit, one God, now and forever. Amen. 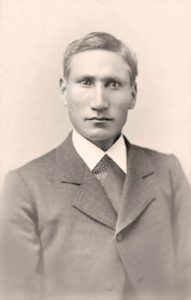 Making Medicine (O-kuh-ha-tuh), also known as David Pendleton Oakerhater, was born into the Cheyenne nation (Oklahoma Territory) around 1847. He participated in his first war party at a young age, and over time, he gained a reputation among the Cheyenne as a skilled warrior.

Making Medicine first came into conflict with the United States after a retaliatory raid on poaching settlers. The US government responded to the Cheyenne with a war of attrition to deprive the Cheyenne and other affiliated tribes of food and supplies. By 1875, Making Medicine and several fellow warriors surrendered to the United States at Fort Sill. A group of seventy-four of those who surrendered were arrested, detained without trial, and moved to Saint Augustine, Florida. Making Medicine and his fellow captives were forced to assimilate into American society. At Fort Marion, he and his fellow captives learned English, taught art and archery lessons, and had their first encounters with Christian missionaries. By 1877 Episcopal deaconness Mary Douglass Burnham made arrangements to sponsor the remaining Cheyenne prisoners for positions of service in the church.

Making Medicine was sponsored by Alice and George H. Pendleton and brought to Paris Hill, New York, where he became affiliated with St. Paul’s Episcopal Church. Under the guidance of the parish priest, he was educated in the scriptures and baptized in 1878, taking the name David from the Bible and Pendleton in honor of his sponsors. His theological formation continued, and in 1881 he was confirmed and ordained as a deacon.

Not long after, Oakerhater returned to Oklahoma as a missionary and took part in the founding of schools and missions, including those in Bridgeport and Whirlwind. He continued serving his people until his death in 1931. Upon his return to Oklahoma, he told the Cheyenne, “You all know me. You remember when I led you out to war I went first, and what I told you was true. Now I have been away to the East and I have learned about another captain, the Lord Jesus Christ, and he is my leader. He goes first, and all he tells me is true. I come back to my people to tell you to go with me now in this new road, a war that makes all for peace.”

Collect for David Oakerhater
O God of unsearchable wisdom and infinite mercy, you chose a captive warrior, David Oakerhater, to be your servant, and sent him to be a missionary to his own people, and to exercise the office of a deacon among them: Liberate us, who commemorate him today, from bondage to self, and empower us for service to you and to the neighbors you have given us; through Jesus Christ, the captain of our salvation; who lives and reigns with you and the Holy Spirit, one God, for ever and ever. Amen.