How could you NOT love a matchup between a guy named Odo and another guy who is known as a Studite? Meet Odo of Cluny and Theodore the Studite (spoiler alert for those getting ready to leave a comment: autocorrect does not like "Studite." At all.)

Yesterday, in the most lopsided battle of Lent Madness 2017, Florence Nightingale routed Anselm of Canterbury 81% to 19%. She will move on to face Henry Beard Delany in the Saintly Sixteen.

And, finally, it's not everyday that ESPN covers that other famous bracket tournament that takes place in March. But recently ESPN radio in Louisville, Kentucky, interviewed passionate Lent Madness booster, the Rev. Katherine Doyle of St. Thomas Episcopal Church, about everyone's favorite online Lenten devotion. Take a listen as she appeared on the Bob Valvano show. It's a great segment which you can listen to by clicking here (the spot in question begins at 21:30 of the broadcast). Nice job! 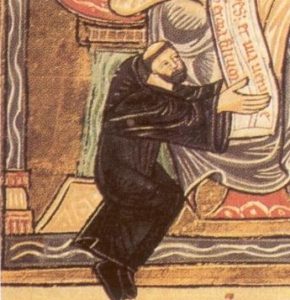 Odo was born circa 879 in France. Odo’s father Abbo secretly dedicated his son to Saint Martin, sending him to a priest for education and formation. But as Odo grew, he became a hale and hearty young man—much more suited, in his father’s opinion, to the life of a noble warrior. Abbo sent Odo to live at the court of one of the dukes of Aquitaine.

Odo recounts that while praying and singing one day in court, he was seized with a violent pain in his head. He suffered for three years until his father confessed his promise to dedicate his son to Saint Martin. Soon after, Odo received the tonsure—the practice of some monks to shave the crown of the head—and served at St. Martin’s Church in Tours.

After reading the Rule of Saint Benedict, Odo was horrified to realize how much his life (and the lives of his brother monks at Tours) deviated from the Rule. Monks at Tours discarded their habits in favor of the fashion of the day and often received gifts from noblemen in exchange for prayers. They wore expensive shoes and refused to walk outside for night prayers to avoid ruining their shoes. They ate lavish meals while ignoring the hungry.

Odo committed himself to living the Rule of Saint Benedict. He discarded his personal property, ate meager rations, and prayed fervently. He embraced the ascetic life and spoke out against the evils of the church of his time—ecclesiastical abuses, lack of prayer, and the oppression of the poor.

Odo entered the monastery at Baume where the Rule of Saint Benedict was strictly followed. Odo would eventually be appointed Abbot of Cluny. Odo visited Rome several times, negotiating peace between the violent power politics of warring nobles and the church. Monasteries in Italy and France summoned him to instill reform within their own walls.

Odo’s legacy is seen in the great age of monasteries, places where worship, care for the poor, and art flourished. His deep spirituality gives us insight into his zeal and commitment to reform holy orders. Odo died in 942 in Tours after assisting with worship on the Feast Day of Saint Martin of Tours.

Collect for Odo of Cluny
God of grace, you hear the promises we freely offer and see the hidden desires of every heart. We thank you for the example of your servant Odo, who zealously sought righteousness and lived out holy community in his life and work. Grant that we, in our own time and ways, would ever seek your will in our lives, to the honor of your son, our Savior Jesus Christ. Amen. 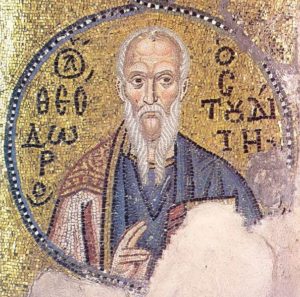 Theodore the Studite (759-826), also known as St. Theodore of Stoudios, was a Greek Orthodox monk. Born in 759, he grew up in a prominent bureaucratic family in Constantinople, receiving a private education that eventually came to be heavily focused around theology.

Theodore’s maternal uncle Platon encouraged the whole family to take monastic vows and transform the family farm into a monastery. Theodore, his father, and his sister joined Platon in 781 and sailed to Bithynia in northwest Asia Minor near the Black Sea. Following the guidance of the Greek bishop, Basil of Caesarea, they established a community that came to be known as the Sakkudion Monastery.

Shortly after Theodore was ordained a priest, Uncle Platon—the abbot of the Sakkudion—took a permanent vow of silence and handed control of the monastery to his nephew. Theodore did well running the Sakkudion Monastery, despite his persistent habit of denouncing the emperor’s divorce and remarriage. This led to years of exile, fights with and floggings from emperors, patriarchs, iconoclasts, and difficult popes. Ultimately, after lots of fasting, praying, and writing iambic verse about icons and clean living, Theodore revived the monastic community of Stoudios in Constantinople

Theodore built Stoudios into a major scholastic and artistic center. Under his leadership, Stoudios became known for its literary output. Theodore devised what amounted to a private mail system for the network of monasteries in and around Constantinople and wrote poems enshrining the community’s rule of life in an easy-to-remember form. Aside from his monastic innovations and reforms, Theodore is best known for two great works: the theological treatise On Holy Icons, a pivotal and foundational work for the use of icons in worship, and a letter he wrote instructing his followers not to own slaves—the first recorded Christian theological stand against slavery.

Collect for Theodore the Studite
Gracious God, who speaks to us in both the complexity of art and the quiet of simplicity, we thank you for your servant Theodore the Studite, who reminded your Church of the many ways in which you are present. Grant us, we pray, the eyes to see you wherever and whenever you appear, that we may see your glory in all your creation, and especially through Jesus Christ your Son, our Lord. Amen.

Theodore the Studite: By Anonymous, Public domain via Wikimedia Commons

268 comments on “Odo of Cluny vs. Theodore the Studite”