Raymond Nonnatus vs. John of Nepomuk

Today marks the last matchup of a full week of saintly action! Raymond Nonnatus, a 13th century Spaniard, takes on John of Nepomuk, the 14th century patron saint of Czechoslovakia.

Yesterday, in the closest vote of Lent Madness 2017 to date, Odo of Cluny held off Theodore the Studite 52% to 48%. Odo will advance to the Saintly Sixteen where he'll face Mechtild of Magdeburg.

One point we want to stress before you start pulling levers for Raymond or John. You should know that our fabulous Celebrity Bloggers are kept to strict word counts on their write-ups. Of course so much more could be said about each saint presented in Lent Madness. If you're curious about learning more about a particular holy soul, we encourage you to dive deeper! Often additional information gleaned by participants is shared in the comments sections below each post. Feel free to share tidbits and resources with your fellow Lent Madness pilgrims. In the next round, the Saintly Sixteen, we get into Quirks and Quotes (either by or about said saint). So fear not. The further a saint advances, the more information you'll be given. [Here endeth the Lent Madness lesson].

Those of you who read the comments will be very familiar with Oliver--Nine Years Old. Well, we are pleased to report that Oliver's mom sent us this picture of the boy himself, posing in front of the pictorial bracket he created for his home church, St. John's in Stamford, CT. 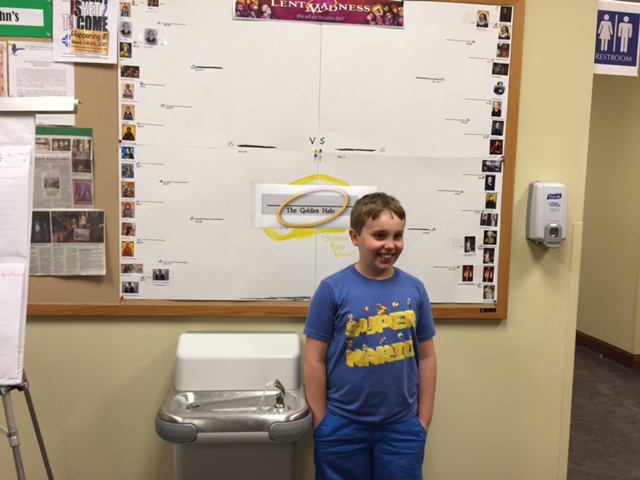 We'll see everybody bright and early on Monday morning for the Battle of the Augustines™ as Augustine of Canterbury squares off against Augustine of Hippo. 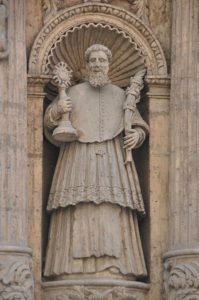 Raymond Nonnatus lived in thirteenth-century Spain, and his nickname “Nonnatus” refers to his birth. Traditions agree he was delivered via Caesarean section, and so was “not born” (according to the scientific understanding of medieval Europe).

We don’t know much for certain but gather that Nonnatus was either the rebellious son of a local count or a local shepherd’s child. Either way, tradition says he spent his childhood tending sheep and liked to spend his spare time praying in his local church.

According to one story, Nonnatus convinced his father to let him join a group of monks in Barcelona. Called the Mercedarian order, these men were devoted to freeing Christians from slavery around the world.

After emancipating 140 slaves in Valencia, then another 250 slaves in Algiers, Nonnatus ran into trouble in Tunis—or rather, the ransom money ran out. So, Nonnatus surrendered himself as payment, winning the freedom of 28 captives. His captors, according to legend, bored a hole through his lips with a red-hot poker and padlocked his mouth shut to prevent Nonnatus from preaching. His Mercedarian brothers came to his aid and paid his ransom so that he could return to Spain. Impressively, he clung to life for several more months before dying in 1240 in Castle Cordona, near Barcelona.

After his death, Nonnatus’s popularity flourished—literally, everyone wanted a piece of him, with the count and the townsfolk of Castle Cordona and the Mercedarians all laying claim to his body. To settle the dispute, it was decided to put his body on the back of a blind mule, let the mule wander loose, and see where the mule decided Nonnatus should be laid to rest. The mule proceeded to the chapel where Nonnatus had spent so many of his childhood hours in prayer—and there he was buried. Nonnatus is celebrated as the patron saint of midwives, expectant mothers, and newborn babies—which is why the Anglican order in the novel and popular television program Call the Midwife is named Nonnatus House. Nonnatus and his locked lips remind us of the seal of the confessional, the falsely accused, and those wounded by gossip.

Collect for Raymond Nonnatus
God of all light and life, you knit together birth and death in beautiful mystery: Grant us, through the example of your servant Raymond, whose death was punishment for the lifegiving ministry he proclaimed as an emancipator, the courage to be reconciled to you and the world, through Jesus Christ our only Mediator and Advocate, who dwells with you in the unity of the Holy Spirit, for ever and ever. Amen. 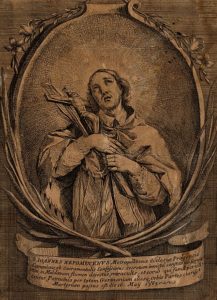 It is believed that King Wenceslaus IV of Bohemia (not the Good King Wenceslas—this Wenceslaus was definitely not good) engaged in a feud with John over the appointment of a new abbot. John appointed an abbot to the abbey at Kladruby whom the king opposed. On the night of March 20, 1393, John was thrown into the Vltava River and drowned.

Eventually the story was told like this: King Wenceslaus suspected that his wife had a lover. Because John of Nepomuk was her confessor, the king ordered him to reveal the name of her lover, but to no avail. As punishment, the king ordered John to be drowned. Because of this legend, John of Nepomuk is considered the first martyr of the seal of the confessional and a patron against slanderers. Because of the way he died, he’s also considered a protector from floods and drowning.

John of Nepomuk is typically represented with a halo of five stars, commemorating the stars that hovered over the Vltava River on the night of his martyrdom. Sometimes his figure is accompanied by an angel indicating silence with a finger placed over the lips.

Collect for John of Nepomuk
Merciful and forgiving God, we thank you for the gifts of confession, absolution, and reconciliation; for without them, we are without remedy and solace in our sin and shame. Thank you for the life of your servant John of Nepomuk, who upheld the seal of the confessional even unto death, for the sake of your love. Grant that we might have such zeal and conviction in our own day, to the honor and glory of our only Mediator and Advocate, Jesus Christ. Amen.

Raymond Nonnatus vs. John of Nepomuk

John of Nepomuk: [CC BY 4.0 (http://creativecommons.org/licenses/by/4.0)], via Wikimedia Commons

301 comments on “Raymond Nonnatus vs. John of Nepomuk”