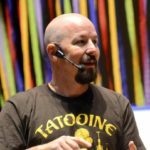 It's not true that David Hansen was named a Celebrity Blogger because we are enamored with the fact that his church's official name includes an exclamation point (Spirit of Joy! Lutheran Church). Nor is it true that we are considering changing the name of our little online devotion to Lent Madness! or even Lent! Madness. David was our very first Lutheran CB and we're delighted he's stuck with us. Tomorrow will mark the end of Celebrity Blogger Week as we are now less than a week away from Lent Madness! (see, another exclamation point).

The Rev. David Hansen, despite growing up as a pastor’s kid, turned out okay. An ELCA pastor, he serves at Spirit of Joy! Lutheran Church in The Woodlands, Texas (outside of Houston), where he lives with his wife Megan, their daughter, and their menagerie of pets. When not preaching and teaching for the Lutheran diaspora in Texas, David is helping to drag the church into the digital age – teaching congregations and leaders to make use of online tools for ministry (You can catch David this year leading an Intensive as a part of the ELCA YouthMinistry Network Extravaganza. He is a regular contributor and moderator in the Church Social Media (#chsocm) community, and wrote the forward to Celebrity Blogger alum Meredith Gould’s The Social Media Gospel. He is an occasional contributor to The Lutheran magazine and Living Lutheran, and blogs at Pastor David L. Hansen. David has recently begun work as the Director for LEAD — an organization committed to providing resources for leaders and ministries. Connect with him on Twitter @rev_david and Facebook.

Lazarus, no doubt. Here was someone who had seen death face to face, who has walked the path that the rest of us only have guesses about. I would love to sit down over a cup of coffee and breakfast and talk about what he experienced in those three days and how it changed him. Why coffee and breakfast? Because what else would one what after being woken from the dead? 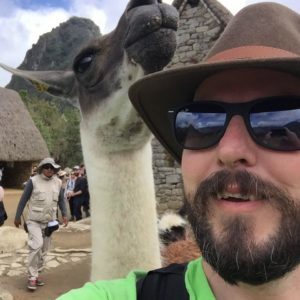 At the top of the list of hymns I could do without would have to be Onward Christian Soldiers. I certainly understand the biblical imagery of the text, but it reinforces a fierce militarism and us-vs-them attitude – neither of which need any encouragement among modern Christians.

On the other hand, I’m fairly certain that It Is Well is on rotation in the heavenly chorus. The reminder that we are called to peacefulness in the midst of the storms of life is exactly the encouragement that we need.

3. You're busy during Lent. Why do you make time for the Saintly Smackdown? What do you get out of it personally?

Lent Madness has become an important part of my Lent each year. I learn so much about each of the saints featured, and their lives become examples I return to throughout the year as I seek to grow in my own faith.