While the Celebrity Bloggers got an entire WEEK (actually two, but who's counting?), the Supreme Executive Committee of Lent Madness gets but a day. And they have to begrudgingly share it. Nonetheless, this is the day that the SEC hath made. Let us rejoice and be glad in it.

What are the job requirements for serving in this capacity? This is shrouded in mystery. All we really know is that Tim and Scott are self-appointed and serve for life. And that they drink a lot of (black) coffee. This more-or-less benevolent dictatorship began in 2012 when Tim, who created Lent Madness two years earlier, partnered with Scott and the folks at Forward Movement. The rest is penitential history.

The SEC does take responsibility for ultimately choosing the 32 saints each year -- though in an uncharacteristic display of democracy they do open up the floor to nominations during Easter season. They also stand as final judge and jury on all decisions and rulings related to Lent Madness, including but-not-limited-to issues of voter fraud, Monday Madness, Celebrity Bloggers, humor, comment moderation, and eligibility of saints.

When not collaborating on Lent Madness, Tim and Scott spend time bickering in online public forums, as each considers the other his archnemesis. 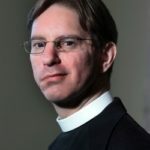 The Rev. Tim Schenck is rector of the Episcopal Parish of St. John the Evangelist in Hingham, Massachusetts, on the South Shore of Boston. He is the author of four books full of humor and faith including most recently  Father Tim’s Church Survival Guide (Morehouse 2015) and Dust Bunnies in the Basket: Finding God in Lent & Easter (Forward Movement 2015). When not tending to his parish, drinking single-origin coffee, desperately seeking material for his syndicated “In Good Faith” column, or blogging at Clergy Confidential, he’s likely hanging out with his family that includes his wife Bryna, two teenage sons Benedict and Zachary, and his dog Delilah. Friend him on Facebook or follow him on Twitter @FatherTim or Instagram. 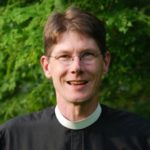 The Rev. Canon Scott Gunn is a geek of both the church and of technology. He serves as the executive director of Forward Movement in Cincinnati, Ohio, whose mission is to inspire disciples and empower evangelists. Scott is also a Deputy to the Episcopal Church’s General Convention, the ultimate achievement for serious church geeks. Along with the Rev. Melody Shobe, he has written two books, an introduction to Christianity, Faithful Questions: Exploring the Way with Jesus, and an introduction to the Episcopal Church, Walk in Love: Episcopal Beliefs and Practices. His blog is Seven whole days, where you’ll read church rants and raves, thoughts about technology, and random musings. You can find him on Facebook, Twitter, Instagram, flickr, or LinkedIn. Scott is married to Sherilyn, who is also a priest, and they have a dog named George (after George Herbert, the first-ever Golden Halo winner). George has his own social media presence, and he'd love it if you followed him on Instagram, Twitter, or Facebook.