We end the First Round with a matchup between two musicians, Isaac Watts and Catherine Winkworth. Naturally, we're calling this the Battle of the Bands. Watts was a prolific Anglican hymn writer whose greatest hits catalogue would be well known to church goers. Winkworth, also a Brit, is credited with bringing the German chorale tradition to the English-speaking world.

Yesterday, Martin de Porres trounced John of Beverley 84% to 16% and will face Dymphna in the next round.

It's hard to believe, but the Saintly Sixteen begins tomorrow! Vote today and stay tuned. Our Lenten journey continues...

Isaac Watts, famously thought of as the father of English hymnody, was born in Southampton, England, on July 17, 1674. Whereas many English people were members of the Church of England, Isaac’s identity as a Nonconformist shaped his vocation and ministry. He received a classical education in Latin, Greek, and Hebrew and demonstrated a proclivity to rhyme at an early age. As he grew older and progressed in his studies, he was offered a scholarship to study at Oxford or Cambridge as a candidate for ordination in the Church of England. He refused this opportunity and chose to study at the Dissenting Academy at Stoke Newington. He was ordained as a Nonconformist minister in 1702 and served a congregation in London for ten years.

Isaac is credited with writing between 600 and 750 hymns, a quarter of which are still in popular use. Many of his hymns were metrical adaptations of the psalms for use in English-speaking congregations. His hymn-writing was said to flow from his own personal faith, described as “gentle, quiet, sturdy, and deeply devout.” The Hymnal 1982 contains seventeen of Isaac’s hymns including “Joy to the world,” “From all that dwell below the skies,” and “When I survey the wondrous cross.”

In addition to hymns, Isaac wrote a textbook called Logic. The full name of the book likely did not fit on the cover: Logic, or The Right Use of Reason in the Enquiry After Truth With a Variety of Rules to Guard Against Error in the Affairs of Religion and Human Life, as well as in the Sciences. The book defined logic as a practical art and became a standard text in universities and among philosophers.

Isaac spent the last few decades of his life largely out of the public eye because of health complications. He continued writing sermons and hymns as well as writing on less religious topics such as the English language and logic. He died in 1748.

Collect for Isaac Watts
God of truth and grace, you gave Isaac Watts singular gifts to present your praise in verse, that he might write psalms, hymns, and spiritual songs for your Church: Give us grace joyfully to sing your praises now and in the life to come; through Jesus Christ our Savior, who lives and reigns with you and the Holy Spirit, one God, for ever and ever. Amen. 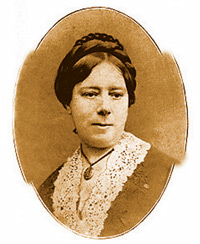 Born in 1827, Catherine Winkworth had a way with words. When Catherine was a sixteen-year-old British school girl, General Charles James Napier conquered the Indian province of Sindh. The conquest was unauthorized and brutal. When Catherine heard about it, she told her teacher that Napier’s dispatch should have read “Peccavi,” Latin for “I have sinned.” It was a dark twist on what the dispatch presumably was,“I have Sindh.”

The pun was sent to the humor magazine, Punch, and became a meme that traveled through history.

Catherine’s cleverness continued to serve her well in her calling. She translated hundreds of German hymns into English and introduced English audiences to the German chorale tradition. She labored to make sure that the translated songs retained the poetry, rhythm, and meaning of the originals.

In 1852, Catherine began to work among the poor in the Sunday School and District Visiting Society. This society gathered volunteer teams to visit poor people in their homes to provide help and comfort. Long after she left this work, Catherine received letters from the people she met and helped. Her compassion was evident in her translation of biographies of founders of sisterhoods for the poor and sick: Life of Pastor Fliedner and Life of Amelia Sieveking. Winkworth not only served people who lived in poverty, but she also had a passion for women’s rights and advocated for higher education for women and girls.

In 1878, Catherine went to care for her nephew, who was disabled. Soon after, she had a pain in her heart and died within an hour.

Collect for Catherine Winkworth
Comfort your people, O God of peace, and prepare a way for us in the desert, that, like your poet and translator Catherine Winkworth, we may preserve the spiritual treasures of your saints of former years and sing our thanks to you with hearts and hands and voices, eternal triune God whom earth and heaven adore; for you live and reign for ever and ever. Amen.