Yesterday, in a surprising rout, Phillips Brooks was relegated to the O Little Town of Lent Madness Infamy, as Marguerite d’Youville trounced him 70% to 30% to advance to the Saintly Sixteen. She’ll face the winner of Damien of Molokai vs. Pandita Ramabai in the next round.

But life, like Lent, moves on. And today we offer: Five syllables. Eleven consonants. Two saints. That’s what you get when the Supreme Executive Committee concocts the Clash of the Consonants. Will the winning saint need to buy a vowel? We’re not sure. But either Hrotsvitha or Gobnait will emerge victorious over the next 24 hours to secure her place in the Saintly Sixteen. 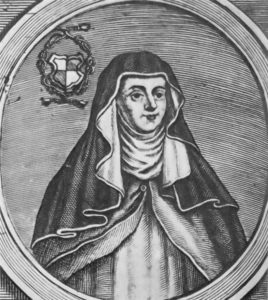 Though she’s not well known today, the tenth-century German canoness Hrotsvitha has been called “the most remarkable woman of her time.”

A Benedictine nun at Gandersheim Abbey in Lower Saxony, Germany, Hrotsvitha is regarded as the first female German poet and the first known female playwright. Popular YouTube channel Crash Course also has credited her with “sneaking” theater back into the Christian world.

Hrotsvitha’s plays, known as “sacred comedies,” are more dialogue than drama—likely meant to be read rather than performed, to be a Christian alternative to bawdy classical works, lest readers be “corrupted by the wickedness of the matter.” They include comedies based on the works of Roman playwright Terence, many on the theme of chastity. Crash Course host Mike Rugnetta jokingly called this “medieval slut shaming,” but he also said the emphasis on chastity suggests to modern readers it was “one of a very few ways women could wield power in the Middle Ages.”

Perhaps best known among the sacred comedies is “Gallicanus” in which the clever Constance tricks a suitor into converting and taking a vow of chastity so that she does not have to marry him. Or there’s “Dulcitius,” which tells the story of three sisters whose prayers confuse the play’s titular character so that he ends up kissing and groping pots and pans rather than the women. It ends with the women being martyred rather than renounce Christianity. Hilarious.

There’s debate over whether any of Hrotsvitha’s plays were performed during her lifetime. The earliest known performance of her work wasn’t until 1888 in Paris. As recently as 2006, a feminist theater company offered the First Annual Hrosvitha Award to any professional company that scrapped plans to produce “yet another production of a Greek tragedy” for one of hers.

Hrotsvitha also wrote narrative poems based on Christian legends, the life of Otto the Great and the history of the convent she called home. She wrote about life as a woman in the early Middle Ages. And she reinterpreted her own name, which meant “strong honor” to mean “loud cry” or “clarion call.”

Collect for Hrotsvitha
O God, you have brought us near to an innumerable company of angels, and to the spirits of just men made perfect: Grant us during our earthly pilgrimage to abide in their fellowship, and in our heavenly country to become partakers of their joy; through Jesus Christ our Lord, who lives and reigns with you and the Holy Spirit, one God, now and for ever. Amen. 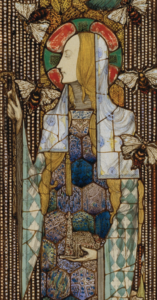 Gobnait is an example of those numerous individuals who could slip through the cracks of history, but the memory of their faithfulness causes them to be remembered for generations. Gobnait’s memory is preserved by the local practices and memory of the Christian communities of Ireland and passed on to us today.

With her brother, Saint Abban, she founded a convent and served as its abbess in the sixth century. They came to that location while fleeing from violence in their home community of County Clare.

Most of the stories of Gobnait center around her protection of the community in which she lived and served.

In one account, raiders were approaching to attack the village. Gobnait sent out bees from her hives, and the bees drove off the attackers. In another tale, Gobnait walked around the village, using her staff to successfully mark a line of protection around the village from an impending plague. In still another story, a foreign invader sought to build a fortress across the valley from the convent. Every night when the workers were done, Gobnait threw a metal ball at the construction site, destroying their work each day until they left in frustration.

In her youth, Gobnait was directed to the site of the convent (Ballyvourney, County Cork) by a vision that told her that the location would be the place of her resurrection. She is buried in Ballyvourney, and every year on her feast day of February 11, pilgrims come to drink from the healing waters of her well. The cemetery in which Gobnait is buried is littered with crutches, a sign of the enduring faith in her gifts of healing.

In art, Gobnait is usually depicted along with bees. They were her companions and her charge at the convent, and their honey was likely used in medicines and cures for those who came to her for care.

Gobnait’s memory serves to remind us of how faithful service leaves a lasting impression on the communities we serve and on the world.

Collect for Gobnait
O God, by whose grace your servant Gobnait, kindled with the flame of your love, became a burning and a shining light in your church: Grant that we also may be aflame with the spirit of your love and discipline, and walk before you as children of the light; through Jesus Christ our Lord, who lives and reigns with you, in the unity of the Holy Spirit, one God, now and forever. Amen

202 Comments to "Hrotsvitha vs. Gobnait"