Welcome back for the first FULL WEEK of Lent Madness 2019. If you're just joining in the fun, we're glad you're here! There's plenty of madness to go and we're delighted to have people jump aboard the purple Lenten train at any point in the season.

Over the weekend, in the only Saturday battle of the season, Ignatius of Loyola strode past Tikhon of Zadonsk 65% to 35% to advance to the Saintly Sixteen, where he'll face the winner of Dominic vs. Marina the Monk.

Today we make our first foray into the Miscellaneous quadrant of the bracket as John Chrysostom faces Margaret of Cortona. Perhaps we should have had a play-in round to decide, once and for all, whether the correct pronunciation of "Chrysostom" should have the accent on the first or second syllable. But however you pronounce it, this should prove an intriguing battle to kick off your Monday.

John Chrysostom was born to a wealthy family around 345 ce in Antioch, Syria. His father, a commander of imperial troops in Syria, died at an early age. John felt a call to monastic life early but stayed with his mother, acting as a caregiver. When the time came for his education, John was sent to study with the great pagan orator Libanius. John excelled in his education. (Later, at the time of his death, when asked who should succeed him in the leadership of his school, Libanius is reported to have said, “John, had not the Christians stolen him.”) John would ultimately use his intellect to become one of the great doctors of the church.

Around 373, John became a hermit and took to an ascetic life, continually standing, scarcely eating, and reading the Bible constantly. Like so many at this time, his asceticism would later impact his health. John was made a deacon in 381 and a priest in 386. From 386-398, John would earn his surname Chrysostom (literally, the “golden-mouthed”) through powerful sermons and oratory. In fact, his Easter sermon is still read from pulpits around the world today. Against his wishes John was made bishop of Constantinople in 397.

His focus on reform and care for those who were poor and vulnerable won him a good deal of respect and admiration. But Chrysostom was often blunt and tactless and did not shy away from criticizing people with incredible power. His disputes, first with Theophilus, the bishop of Alexandria, then with Empress Eudoxia, led to the Synod of the Oak, in which he was deposed. One year later, despite support from Pope Innocent I and much of the Western Church, Chrysostom was convicted of unlawfully resuming his episcopal duties and was exiled.

By this time, Chrysostom was in poor health from his years of asceticism. He was nonetheless forced to march to Pontus in extreme heat. He died in September of 407 from the toll the journey took on his body.

Collect for John Chrysostom
O God, who gave your servant John Chrysostom grace eloquently to proclaim your righteousness in the great congregation, and fearlessly to bear reproach for the honor of your Name: mercifully grant to all who proclaim your word such excellence in preaching, that all your people may be made partakers of the glory that shall be revealed; through Jesus Christ our Lord, who lives and reigns with you and the Holy Spirit, one God for ever and ever. Amen. 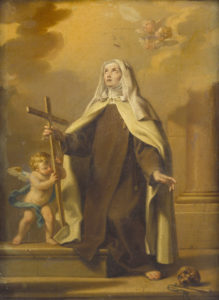 Margaret of Cortona grew up in Laviano, Italy, where her family farmed the land. Margaret was a beautiful girl and an only child. Her mother died when Margaret was only seven years old. Her father remarried, and Margaret had a treacherous relationship with her stepmother.

When she was seventeen, Margaret met Gugliemo di Pecora, lord of Valiano. She became the nobleman’s servant. Gugliemo recognized Margaret’s beauty and began to offer her gifts and attention. Margaret became Gugliemo’s mistress and had a son.

When they had been lovers for about ten years, Gugliemo went on a journey. When he didn’t return, Margaret became worried. Then Gugliemo’s dog came home alone, went directly to Margaret’s room, and began whining. Margaret followed the dog into the woods until the hound began whimpering over a pile of sticks. Margaret immediately set about moving brush and found the body of her lover in a hole below.

In her shock and distress, Margaret left the home of her murdered lover and took her son to her father’s house. They were turned away, and so Margaret knocked on the doors of the monastery of Cortona. The monks welcomed the mother and son—and her son later became a friar there.

Margaret practiced extreme acts of penance. She clothed herself in rags and slept on hard ground. She cut and bruised her face in order to mar her beauty. When she visited her hometown, she hired a woman to lead her around like a beast on a rope, yelling, “Look at Margaret, the sinner!”

Margaret joined the Order of Saint Francis and chose to live in poverty, often begging for bread to eat. She became a nurse and began a hospital for those who were sick, poor, and homeless. And she was willing to stand up to authority figures, even chastising a bishop for his violence and plundering.

Throughout the rest of her life, Margaret was drawn to God, not through severe acts of self-punishment but through the mystical reality of God’s love for her. She became known as the second Magdalene because of her tears and Christ’s love for her.

Collect for Margaret of Cortona
O God, as your servant Margaret of Cortona found a home where her repentance led to a life of prayer, service, and leadership, Grant that we may always seek to dwell where estrangement yields to reconciliation, through Jesus Christ, who is himself the goal of all our seeking and the answer to our desires, unto whom, with you and the Holy Spirit, be honor and glory, now and forever. Amen.

219 comments on “John Chrysostom vs. Margaret of Cortona”