After a full year of holy anticipation, Lent Madness returns for another season of saintly thrills and spills! Whether this is your tenth year engaging in the annual saintly smackdown or your first, we’re delighted you’ll be spending a portion of your Lenten journey among us. Along the way there will be debates, ire, angst, rejoicing, laughter, and holy trash talking. Just remember, it’s all in the spirit of this holy season specifically set aside to grow closer to God through our relationship with Jesus Christ.

To experience the fullness of the Lent Madness experience, the Supreme Executive Committee encourages you to do several things. First, like Lent Madness on Facebook and/or follow us on Twitter. Second, subscribe to the Lent Madness e-mails so you never miss a vote. You can do this by going to the home page of our website and entering your e-mail address (near the top right). Third, you can support the ministry of Lent Madness by heading over to the Lentorium and purchasing Lent Madness swag.

But mostly, we encourage you to read about the 32 saintly souls participating in this year’s edition of Lent Madness, faithfully cast your (single!) vote on the weekdays of Lent, and add your comments to the great cloud of participating witnesses that gathers as the online Lent Madness community each year.

Lent Madness 2019, or Lent Madness X as we’ve been calling it, kicks off with a battle between two Biblical heavyweights as we settle, once and for all, the age old question: Mary vs. Martha. And before you say it, of course it’s not fair! It’s not called Lent Madness for nothing.

So, hang onto your halos, friends, and prepare yourselves for another wild ride of saintly action. Away we go! 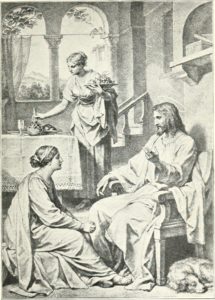 Mary of Bethany lived in first-century Bethany with her sister, Martha, and her brother, Lazarus, as we are told in the Gospel of Luke. Along with her siblings, she was among the very first to believe in Jesus.

Luke recounts the famous story of Jesus having supper at the sisters’ house, where Martha, concerned with getting the food on the table, asks Jesus to scold Mary for her apparent lack of concern. It’s notable that Mary is described as sitting at Jesus’ feet while Martha serves; usually only the male students of rabbis sat at the feet of their teachers. For Mary to do so is highly unusual for an unmarried woman—possibly why Martha gets antsy about it. But Jesus declines to chide Mary for what she has done, declaring that in her discipleship, she has “chosen the better part, which will not be taken away from her.”

The Gospel of John also gives us a few more glimpses of Mary of Bethany. John explicitly links Mary with the woman who washes Jesus’ feet with her hair. At Lazarus’s death, both Mary and Martha race out into the street to greet Jesus when he finally comes, and Mary chastises him, echoing her sister’s words, saying “Lord, if you had been here, my brother would not have died.” At her declaration, Jesus is moved to tears.

It is clear that Jesus is quite close with this family. Through contextual clues, we can tell that the family must have been fairly well-to-do, given the sisters’ independent status and ability to support Jesus’ ministry. They seem to own their house and are able to provide a separate burial site for their brother (somewhat rare—and not cheap.). We also have John’s story of Mary spending more than 300 denarii (equivalent to 300 days of wage for a laborer) on pure spikenard to anoint Jesus.

Later church tradition treated Mary as it treated many of the other women of the gospel; it elided her story into that of an Everywoman who is remarkable mostly in her blandness. The few stories that survive in the West often conflate her with Mary Magdalene. In the Eastern Orthodox Church, her uniqueness survives, and with her sister and Mary Magdalene, Mary of Bethany is remembered on the third Sunday of Easter as one of the Myrrh-Bearing Women—the first to recognize the risen Christ.

Collect for Mary of Bethany
O God, heavenly Father, your Son Jesus Christ enjoyed rest and refreshment in the home of Mary and Martha of Bethany: Give us the will to love you, open our hearts to hear you, and strengthen our hands to serve you in others for his sake; who lives and reigns with you and the Holy Spirit, one God, now and for ever. Amen. 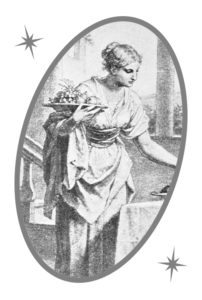 The iconic Martha of Bethany is the hero of faithful pragmatics and doers, though she gets a bad rap for being less contemplative than her sister. When Jesus visits her house, Mary sits at his feet, but Martha feels the burdens of her role as hostess and works in the kitchen, resentful that Mary isn’t helping. When she complains, the Lord answers, “Martha, Martha, you are worried and distracted about many things; there is need of only one thing. Mary has chosen the better part, which will not be taken away from her.” Because of this anecdote, Martha is seen to symbolize worldly concerns while her sister Mary focuses on the spiritual. When Jesus asks someone to open the tomb of her days-dead brother Lazarus, the heartbroken Martha stays true to her practical nature, responding, “Lord, already there is a stench.”

Although not expressly mentioned in the gospels, the Orthodox tradition honors both Martha and Mary as among the followers of Jesus who stood at Golgotha to witness the crucifixion, and later carried myrrh to his tomb to anoint the body. Thus they are counted among the first witnesses of the resurrection. This tradition also holds that Martha fled persecution in Judea with Lazarus, joining him as a missionary abroad until he became a bishop in Cyprus, where all three siblings eventually died.

According to the Golden Legend, a medieval hagiography (writing about the lives of the saints), the siblings were of noble birth. Martha put her aristocratic hostess skills to use for Jesus because, “She thought that all the world was not sufficient to serve such a guest.” The same legend holds that the family arrived in France miraculously via a ship without oars or sails to preach the gospel. The eminently practical Martha tamed a Galician dragon, “half beast and half fish, greater than an ox, longer than a horse, having teeth sharp as a sword, and horned on either side, head like a lion, tail like a serpent.” Afterward Martha lived a life of daily devotion in France until she died. A tomb in the Collegiate Church of Tarascon purportedly contains her relics.

Martha’s feast day is July 29, and she is patron saint of cooks, dietitians, domestic help, housekeepers, servants, and waitpersons. And of course, she is admired by pragmatics, doers, and practitioners of common sense.

Collect for Martha of Bethany
O God, heavenly Father, your Son Jesus Christ enjoyed rest and refreshment in the home of Mary and Martha of Bethany: Give us the will to love you, open our hearts to hear you, and strengthen our hands to serve you in others for his sake; who lives and reigns with you and the Holy Spirit, one God, now and for ever. Amen.

537 Comments to "Mary of Bethany vs. Martha of Bethany"