In yesterday’s matchup between the Golden Mouthed John Chrysostom and the Harp of the Holy Spirit Ephrem of Nisibis, the bishop plucked the deacon 74% to 26% to advance to the Elate Eight.

Today, we’re back up to the Biblical quadrant of the bracket as Tabitha takes on Photini. The winner of this battle will meet Martha of Bethany in what promises to be a bruising Elate Eight pairing.

Yesterday, we also celebrated the release of Tim’s new book on coffee and faith, titled Holy Grounds: The Surprising Connection between Coffee and Faith – From Dancing Goats to Satan’s Drink. It makes a terrific gift for everyone on your Lent list! And, yes, even tea drinkers will find it a compelling read. 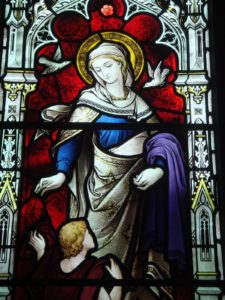 Tabitha is a saint who has inspired apostles to put words into action and poets to put her actions into words.

In his poem by the saint’s Greek name, “Dorcas,” George MacDonald guesses the saint may have heard Jesus speak. After all, as others have noted, the Bible describes her as a disciple.

Maybe she heard Jesus tell the parable of the sheep and goats: “Truly I tell you, whatever you did for one of the least of these brothers and sisters of mine, you did for me.” Maybe that’s what inspired her to the action for which she is remembered: making robes and other clothing to help the poor and widows at Joppa. Maybe she clothed them, or maybe she sold the clothing to help support them.

“Home, home she went, and plied the loom,
And Jesus’ poor arrayed.
She died-they wept about the room,
And showed the coats she made.”

In another poem — “The Widows’ Tears; Or, Dirge Of Dorcas”— Robert Herrick gives words to the widows gathered around Tabitha’s body, crying and showing off the clothing she had made. In Herrick’s words, they address the saint:

“Sleep with thy beauties here, while we
Will shew these garments made by thee;
These were the coats; in these are read
The monuments of Dorcas dead:
These were thy acts, and thou shalt have
These hung as honours o’er thy grave.”

This is what brought Peter to Joppa — now Tel Aviv-Jaffa — after the disciples there sent several men to urge him to come and heal Tabitha. It’s also what led to a breakthrough for Jesus’ early followers, throwing open the doors of the church to welcome all, Jewish or Gentile. While in Joppa, Peter stayed with Simon the tanner, whose work would have left him smelly and often ceremonially unclean according to Jewish law. And Peter had a vision at Simon’s house in which God told him not to call anything impure that God had made clean.

He then immediately had the opportunity to put what he heard into action when several men asked him to come to the home of a centurion named Cornelius, who also had a vision. This meant associating with and visiting a Gentile, which, he told them, is against Jewish law. And yet Peter went. Maybe he was inspired by Tabitha to put words into action.

Later “Dorcas societies” were. They formed to provide clothing for the poor.

And who knows who else she continues to inspire, as she is remembered with feast days in a number of Christian traditions, depicted in stained glass windows in all kinds of churches and considered by the Orthodox Church in America to be the patron saint of tailors and seamstresses. 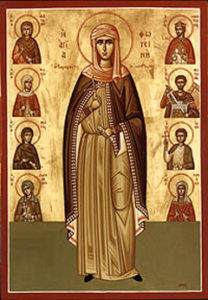 Photini (one of many spellings of her name) encounters Jesus at the well as she is drawing water and he comes for a drink. She engages him in conversation, a testament to the boldness that would define her life as an apostle and missionary and her words that proclaimed fearlessly the Good News in Jesus.

Her words converted her own family. On Pentecost, Photini, her five sisters, and two sons were baptized. She continued her missionary career, going to Carthage to preach the Good News of Jesus, then to Rome. Photini boldly proclaimed to Nero, when asked why she was in Rome, “We have come to teach you to believe in Christ.”

Nero asked if she was prepared to die for this man she called Christ, to which Photini, never one to be a silent witness, proclaimed to all the Roman court, “Yes, for the love of Jesus, we rejoice in his name and will gladly die for him.”

Nero tried to martyr Photini and her companions, to which she responded repeatedly with words of prayer and praise for Jesus. Nero beat them, and Photini sang psalms. He ordered his sister to have a banquet for them, hoping to tempt them with wealth and luxury. Photini’s witness converted Nero’s sister, who ordered all the gold from the banquet distributed to the poor citizens of Rome. Nero ordered them burned for seven days in a furnace. Photini sang hymns, until they walked out of the furnace, still singing hymns. Nero ordered them to drink poison. Photini offered to be first, saying, “I will drink first so you will see the power of God.” They all survived.

For three years, Nero imprisoned Photini. While she was imprisoned, she turned her jail cell into a church as she preached and baptized, converting many Romans. Nero eventually threw Photini into a dry well, where she welcomed embrace of the Living Water into eternal life.

In the 11th century, an epidemic causing blindness swept through Constantinople. A man named Abraamios, wept and called out for help from his failing sight. One night he saw an elderly woman, holding a candle that cast away all shadows from his dimming vision. She said to him, “Receive the light.” She directed him to a cave. Abraamios immediately ran to the place, where he found an underground chamber holding the bones of Photini. Abraamios kissed her bones and wept, and he regained his sight.

The witness of Photini continues to preach to us. The church built at the Well of Jacob near modern-day Nablus is filled with icons telling the story of her encounter with Jesus. And the Monastery on Mount Athos houses her incorrupt foot and leg, while Grigoriou Monastery has a portion of her skull. Her relics and icons are venerated daily in thanksgiving for her words and her life that led many to believe in Jesus.

Tabitha: St. Dorcas window at All Saints’, Freshwater on the Isle of Wight.

86 Comments to "Tabitha vs. Photini"