With today's matchup we jump out of the frying pan and into the fire. Yes, it's Elizabeth Fry vs. Florian, patron saint of firefighters. Sometimes matchups are engineered by the Supreme Executive Committee just to keep themselves amused. We assure you, It doesn't take much.

Yesterday, it was Hildegard of Bingen in a romp as she made Romanos the Melodist sing the blues 75% to 25%. She'll go on to face the winner of Gregory of Nazianzus vs. Elizabeth the New Martyr in the Saintly Sixteen. 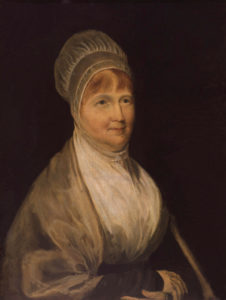 Elizabeth (Betsy) Fry was born in England in 1780. Both her parents came from prominent banking families. Raised a Quaker, she married at twenty, was a minister in the Society of Friends, and gave birth to eleven children.

Inspired by the preaching of social reformers, Betsy visited Newgate Prison at the age of thirty-three. The conditions shocked her: some women had not even had a trial. Children lived with their incarcerated mothers, and the women cooked in their cells. Within a few years, she bankrolled a prison school for the inmates’ children. In the spirit of the Society of Friends, she brought democratic principles to the prison, organizing the women to create their own rules. Her work led to the founding of the Association for the Reformation of the Female Prisoners in Newgate, which trained the women in useful skills that might make them employable upon their release. Through this reform work, Betsy advocated the goal that prison should be rehabilitation rather than punishment, an idea that influenced many municipal leaders in London and prison authorities throughout Britain.

For women being transported to penal colonies abroad, Betsy took up the cause of their safety and welfare. She sent them aboard ships with a Bible, practical items like eating utensils, and material to make a quilt to sell when the women reached their destination. Her efforts to improve conditions for these female travelers ultimately helped bring about the abolition of the practice in her lifetime. In 1818, Betsy spoke to a committee of the British House of Commons about the plight of prisoners, making her the first woman to give evidence in Parliament.

Wherever she saw suffering, she took action. After seeing a homeless boy dead from exposure, she built a shelter in London. She started a visiting society in Brighton to provide help for the poor, and as with her prison efforts, the model caught on. Like other reforming Quakers, she was an outspoken abolitionist. The nurse training program she began in 1840 provided nurses to travel to Crimea with Florence Nightingale. In the words of her Quaker tradition, Betsy saw the inner light of God in every person, and from within her, let the light guide her many actions of compassion, leading to just reforms.

Collect for Elizabeth Fry
Almighty God, whose will it is to be glorified in your saints, and who raised up your servant Betsy to be a light in the world: Shine, we pray, in our hearts, that we also in our generation may show forth your praise, who called us out of darkness into your marvelous light; through Jesus Christ our Lord, who lives and reigns with you and the Holy Spirit, one God, now and for ever. Amen. 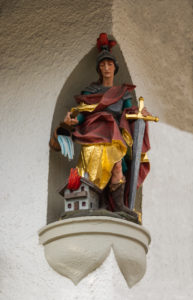 Florian was born in 250 CE in the Roman city of Aelium Cetium located in modern-day Austria. He was a soldier in the Roman army. One of his primary roles was to organize and lead a firefighting brigade. He ascended the ranks of the Roman military and was ultimately assigned by Diocletian to an administrative position in Noricum (again in contemporary Austria).

After the Diocletian persecution broke out in 303, Florian refused to carry out his orders to seek out and prosecute Christians. In 304, the emperor sent his emissary Aquilinus to convince Florian to fulfill his duties. Florian announced his own commitment to Christianity and was subsequently beaten. He is said to have declared that a “few scratches” is a small price to pay for his faith. When he refused to offer sacrifices to the Roman gods, Florian was condemned to death.

After enduring more beatings, the initial plan was to burn him publicly. He replied that if he were to be placed on the pyre he would ascend the flames to heaven. It was then decided that he be drowned. He was taken by boat into the Enns River and was thrown overboard with a millstone around his neck. Later faithful Christians rescued his body and gave him a proper burial.

Florian is the patron saint of firefighters, chimney sweeps, and brewers. He is celebrated on May 4, coinciding with International Firefighters’ Day. His symbol, the Florian Cross, is used as a symbol for firefighting, especially in the United States.

Collect for Florian
Almighty and everlasting God, who kindled the flame of your love in the heart of your holy martyr Florian: Grant to us, your humble servants, a like faith and power of love, that we who rejoice in his triumph may profit by his example; through Jesus Christ our Lord, who lives and reigns with you and the Holy Spirit, one God, for ever and ever. Amen.