In case you lost track (again?), today is FRIDAY. The only thing that really means is that this is the final Lent Madness battle of the week! We finish things up with Elizabeth the New Martyr facing Hildegard of Bingen for a shot at Brother Lawrence, one of the Cinderellas of Lent Madness 2020.

Yesterday, Joanna the Myrrhbearer slipped past Bartimaeus 65% to 35% She’ll face Joseph in the Elate Eight.

We’ll be back first thing Monday morning for the last matchup of the Saintly Sixteen as Elizabeth Fry and Clare of Assisi vie for the final spot in the Elate Eight. Stay safe out there, everyone, and go vote!

Elizabeth Fyodorovna was no stranger to tragedy. In tragedy she bears witness.

In the wake of her husband’s assassination, it is reported that she requested to the Czar that the murderer not be condemned to death. When the Czar refused, Elizabeth went to visit and pray with the man in prison where he awaited his sentence. This gesture of forgiveness is also seen in the cross she set up as a memorial to her husband. Taking a cue from Jesus in the Gospel of Luke, the cross was inscribed, “Father, forgive them for they know not what they do.”

After her husband’s death, she divested herself entirely of her wealth, with much of it going to charities. She did not even keep her wedding ring. After his death the only jewelry she ever wore was a simple wooden cross suspended by a white ribbon. She abandoned a life of wealth and prestige to go, in her words, “into the greater world, the world of the poor and afflicted.”

She established the Mary and Martha Home because the two women together embodied faithful discipleship. Attention and devotion to Christ would always be accompanied by service to the community, especially to those who are most vulnerable. She described the work of the convent as follows: “We read the newspapers here, we keep track of events and we receive and consult with people in active life. We are Marys, but we are Marthas as well.”

Elizabeth worked tirelessly. In addition to the duties of running the convent, she would regularly visit the houses that she founded for people sick with tuberculosis and be present with those who were ill. One of her biographers wrote that “she never once flinched from their embraces.”

When the revolution started, Elizabeth hoped it would refine her family and bring them nearer to God. When the revolutionaries came to arrest her in her convent she is reported to have calmly replied, “If you want to arrest me I shall have to go with you, of course. But I have a rule that before I leave the convent for any purpose I always go into the church and pray. Come with me into the church, and after I have prayed I will go with you.”

Elizabeth was ultimately exiled and then murdered with other members of the royal family. Buried alive in an abandoned mineshaft, until the end she continued as Mary, singing hymns to God and as Martha, tending to the wounds of those with her. 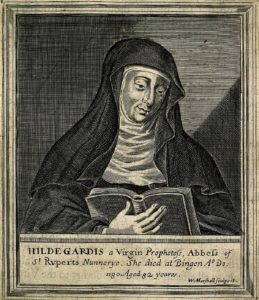 As the COVID-19 pandemic sweeps across the globe, and as many of us self isolate in our homes and apartments for fear of catching and spreading this virus, I’m struck by the relevance of Hildegard of Bignen’s writings in science and medicine. Primarily across two works, Physica and Causae et Curae, Hildegard drew from her experience shuttling between her monastery’s herbal garden and infirmary, ultimately sharing insights on human health and flourishing that continue to fascinate medievalists and even a few medical doctors today.

One of Hildegard’s unique contributions to medicine and theology is her use of the term ‘viriditas’ which is roughly translated as greenness, vitality, freshness and new life. For Hildegard, this was both a medical and theological term. Observing the way that the land around her couldn’t help but ‘sweat greeness’ and new life, she connected this to the ‘new life’ of human health and flourishing that was to be found in Christ. There is a medieval inevitability to this vision. For Hildegard, it’s clear that God desires all creation to flourish, and the sending of God’s Son is part of this greening of all creation. Human health and vitality — our own version of greenness — is an outcome of reconnecting to God’s desire for all creation.

As exalted as this theological vision is, Hildegard was also practical in laying out her medical insights. Famously, Hildegard drew a connection between gardening and medicine, arguing in Causae et Curae that one could attend to and manipulate the humors of the body in the same way an excellent gardener might manipulate elements of a garden to achieve a vibrant row of herbs. Again, Hildegard was linking the garden to the infirmary, connecting human flourishing to the flourishing of the medicinal herbs she and her fellow nuns in the monastery were growing. And while today we’d likely object to cures based in humoral theory, Hildegard is credited with observing how human health is the outcome of many elements that exist in complex, dynamic relationships with one another.

And it’s these dynamic relationships that I am thinking about today as many of us ‘shelter in place’ so as to prevent the spread of COVID-19. For the first time in over a century, love of neighbor demands that as many of us self isolate as possible so as to prevent the rapid spread of COVID-19. For me this has resulted in a unique opportunity to reflect on what I need for flourishing. Not much in the way of things, as it turns out, except that I’m finding I do need as much nature as possible.

With her constant shuttling between the garden and infirmary, I suspect Hildegard of Bignen wouldn’t be surprised to hear that my health is requiring me to take long, socially-distant walks in the park with my dog. I suspect she also wouldn’t be very surprised by my recent insistence on cooking all meals because of the way it puts me in physical contact with the colors and scents of fresh vegetables. ‘The earth sweats greenness’ Hildegard observed, and I’m more keenly aware now than ever how our spiritual and physical flourishing requires us to reconnect with that.

83 Comments to "Elizabeth the New Martyr vs. Hildegard of Bingen"