Welcome back! After a day off from voting, we hope you're ready for the first full week of Lent Madness action. On Friday, we saw Eustace behave like a deer in the headlights against Margery Kempe, as he was slain 70% to 30%.

As you read, reflect, and vote, don't forget you also have a built-in opportunity to pray. Each saintly write-up in the opening round includes a collect (pronounced COLL-ect), or brief prayer, inspired by the respective saints. Some days you may breeze past them or ignore them altogether, but we do encourage you to linger when you can. Perhaps there's a phrase that jumps out at you or connects to your own Lenten journey. Anyway, we just wanted to point out that small morsel of added bread for your journey. 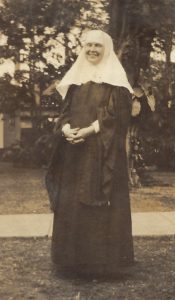 Eva Lee Matthews was born on February 9, 1862, in Glendale, Ohio, just outside of Cincinnati. She was the daughter of a former justice of the Supreme Court, Thomas Stanley Matthews. Raised in the Presbyterian tradition, Eva accompanied her brother, the future Bishop Paul Matthews, when he went to study in Oxford, England. There she encountered the work of Charles Gore and other Anglican luminaries and found her spiritual home in the sacramental life of Anglicanism. She was confirmed in the Episcopal Church on their return to the U.S. She and her brother also ministered in Omaha, Nebraska, where she worked tirelessly to serve poor and disenfranchised women and children. Eva then traveled to Palestine. She recounts her travels and experiences in the book, “A Little Pilgrimage to Holy Places.”

These experiences of service and faith led Eva to return to Ohio where she and her longtime friend Beatrice Henderson founded Bethany Mission House, so named because of their conviction that the Christian life is one of both service (Martha) and prayer (Mary). Continuing her service to children, Eva focused on educating, clothing, and caring for those children in need. She considered joining an established order but was encouraged to start a new American one. In 1898, Eva and Beatrice took vows and formally established the Community of the Transfiguration. Now known as Sister Eva Mary, she soon moved the community to her hometown of Glendale, a suburb of Cincinnati. The sisterhood grew throughout the 1920s, engaging in ministry in China, Japan, Hawaii, Texas, and California, and in locations throughout Ohio, including Painesville, Cleveland, and Lincoln Heights. Today, the community runs Bethany Episcopal Day School, the Transfiguration Spirituality Center, and St. Monica’s Recreation Center.

Mother Eva, as she is known today, taught that through our actions and care for others, the light of Christ shines through us. She was an active leader of the Community of the Transfiguration where she served until her death in 1928. She is buried under the altar in the chapel at Bethany School.

Collect for Eva Lee Matthews
O God, whose blessed Son became poor that we through his poverty might be rich: Deliver us from an inordinate love of this world, that, inspired by the devotion of your servant Eva Lee Matthews, we may serve you with singleness of heart, and attain to the riches of the age to come; through the same Jesus Christ our Lord, who lives and reigns with you, in the unity of the Holy Spirit, one God, now and for ever. Amen. 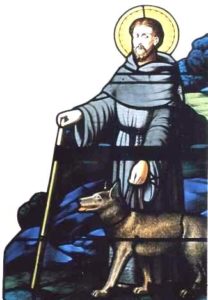 Hervé lived during the sixth century and is one of the most popular saints in Brittany (northwest France). He is sometimes called the veterinarian saint, with people praying to him for protection for horses and animals of all kinds.

According to legend, Hervé’s father was walking through the forests of Brittany when he heard a young woman singing. After talking with her for hours, he realized he loved her completely and abandoned his journey home. The couple married, and some years later, welcomed their son Hervé, who was born blind.

Some years later, Hervé’s father died. His mother sang to young Hervé in her grief, instilling in him a lifelong love of music and song. Hervé, staving off destitution and starvation for his mother and himself, traveled the Brittany countryside to beg for money, led by a large white dog.

After many years of begging, Hervé asked his mother if he could retire into the woods to sing hymns to praise God. His mother agreed, and she herself became a solitary. Hervé and his dog wandered into the forest in search of his uncle Gorfoed, also a hermit. Hervé’s dog led him to Gorfoed’s hermitage, then barked to announce their arrival. Gorfoed opened his door to see his nephew, bathed in the light of the new day, and immediately recognized that God had sent him for his care and teaching.

Hervé was an inspired and exceptional student, and after seven years, Gorfoed appointed Hervé to assume his teaching duties when he retired. Hervé taught children poetry, song, and daily wisdom as they followed the teachings of God. Hervé eventually left the hermitage and established a monastery, and then traveled around the countryside, accompanied by his niece. Several bishops attempted to ordain Hervé to the priesthood, but each time he declined, instead embracing his ministry of teaching and preaching about Jesus to area villages, singing songs glorifying God and caring for the least of these he encountered along the way.

On his deathbed, Hervé was surrounded by monks who said that as he took his last breaths, they heard the angelic choirs of heaven singing to welcome the blind saint of Brittany into heaven.

Collect for Hervé
O God, you have brought us near to an innumerable company of angels, and to the spirits of just men made perfect: Grant us during our earthly pilgrimage to abide in their fellowship, and in our heavenly country to become partakers of their joy; through Jesus Christ our Lord, who lives and reigns with you and the Holy Spirit, one God, now and for ever. Amen.