Well, well, well. In what many pundits are calling the first upset of Lent Madness 2020, Herman of Alaska dispatched Elizabeth of Hungary yesterday 58% to 42%. This means that the first matchup of the Saintly Sixteen has been finalized as Herman will face Thomas More for a shot at the Elate Eight.

Today, it's back to the Bible as Joseph -- no, not the Israelite patriarch, but the "father" of Jesus -- squares off against Joshua of Promised Land fame. Will Joseph be buried upside down? Or will the walls come a-tumblin' down on Joshua. That's the question of the day as the First Round continues. Go vote! 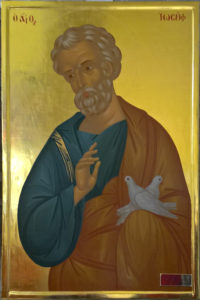 Worldwide, thousands of churches, cathedrals, cities, educational facilities, religious orders, hospitals, products, institutions, streets, regions, even sports teams are named for Joseph. Art, iconology, music, and books are dedicated to him or feature him. He looms large in Christianity and in the story of Jesus. He is an important saint and mentor, and his impact on our world is undeniable.

Nonetheless, the documented details about Joseph are limited. We do not know when Joseph was born, and scholars believe he died sometime after the twelve-year-old Jesus’ visit to the temple but before the baptism of the thirty-year-old Jesus. Joseph’s exact age is undetermined; however, his depictions usually show a kindly middle-aged or older man.

The Gospel of Matthew tells us that Joseph was a descendant of the great King David. Joseph was married to Mary, the mother of Jesus, and lived in Nazareth. He lived his life in strict observance of the Jewish tradition. He was the earthly father to Jesus, teaching him the trade of a carpenter, guiding him in the religious traditions, and caring for him and his mother. As such, Joseph’s contributions to Christianity and to Jesus’ life are unsurpassed.

Joseph teaches us that God will help clear our doubts. Tradition holds that, upon learning that Mary was pregnant, Joseph considers ending his betrothal to her. Showing his strength of character and humility to God, he obeys the word of an angel who orders him to care and keep her.

Following the birth of Jesus, he obeys another angel’s instructions to travel to Egypt, escaping the wrath of the cruel Herod and bringing Jesus out of harm’s way. In time, Joseph returns with his family to Nazareth, settling into the life of a tradesman and observant Jew.

Joseph is the patron saint of fathers, stepfathers, carpenters, craftsmen, engineers, working people, families, immigrants, pilgrims, travelers, and realtors. He is also the patron of numerous countries and cities throughout the world; San Jose is the most common place-name in the world. Pray to Joseph for a happy death, to deter doubt, to halt hesitation—and when buying a house.

Collect for Joseph
O God, who from the family of your servant David raised up Joseph to be the guardian of your incarnate Son and the spouse of his virgin mother: Give us grace to imitate his uprightness of life and his obedience to your commands; through Jesus Christ our Lord, who lives and reigns with you and the Holy Spirit, one God, for ever and ever. Amen. 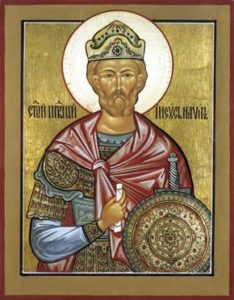 The guy who saved Israel from slavery. The one who literally parted the Red Sea to lead the people to safety. The first one in generations who spoke with God. Yup, Moses. That’s who Joshua followed as leader of Israel. It’s like having to take the stage after Beyoncé.

When they first approached the Promised Land, it was Joshua and Caleb alone who advised that the Israelites should proceed forward. And for that, Joshua and Caleb were the only ones from their whole generation to be allowed to enter Canaan—an honor denied to even Moses himself.

When it was time to choose a successor, the choice was easy for Moses. Even his own children couldn’t measure up to the leadership potential of Joshua.

After leaving slavery and wandering in the desert for forty years, Joshua still believed God’s promise. Just as Moses had parted the Red Sea, Joshua parted the Jordan and led the people of Israel into the Promised Land.

The story of what comes next—of Bronze Age warfare, the conquest of nations, the cruelty of war is uncomfortable for us. And yet, in the midst of a very culturally rooted story are some powerful universal messages. We see the power of Joshua’s trust in God. We hear a message of a God who will suspend the very laws of nature—suspending the sun in the sky—for his people. We hear of unexpected people like Rahab being entrusted by God and Joshua with the salvation of the people of God.

Joshua, which means “The Lord saves,” led the journey of an oppressed people living in slavery to those who live in the land promised to them. How important is Joshua to the story? Generations later, God makes a plan to intervene and save the people again, using a child who is given the name Yeshua—a form of the name Joshua. God saves.

Collect for Joshua
Almighty God, you have surrounded us with a great cloud of witnesses: Grant that we, encouraged by the good example of your servant Joshua, may persevere in running the race that is set before us, until at last we may with him attain to your eternal joy; through Jesus Christ, the pioneer and perfecter of our faith, who lives and reigns with you and the Holy Spirit, one God, for ever and ever. Amen.