Welcome to the big, giant, full week of sacred Saintly Sixteen action! Monday through Friday our collection of saintly souls will be scratching and clawing their way into the Elate Eight. Today we kick things off with a matchup between Margery Kempe, who easily defeated Eustace, and Brother Lawrence, who stunned St. Patrick in the opening round.

Just to keep everyone updated, on Friday Joseph visited defeat upon Elizabeth 76% to 24%. He'll join Herman of Alaska as the first two saints to achieve the Saintly Sixteen.

As you wait expectantly for another episode of Monday Madness, go cast today's vote! 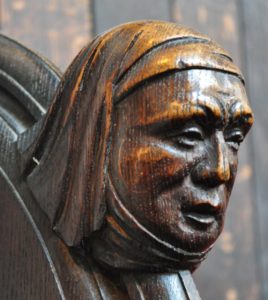 Margery Kempe is only known to us through her writing, The Book of Margery Kempe. From the book, we have a plethora of quotes from her, a woman of the 14thcentury dictated her experiences and devotion to Jesus Christ to a priest.

Margery’s yearning to share her faith and her deep spiritual experience in writing is an extension of her love to share her faith through words. Margery was most likely illiterate; she paid a priest to write her story. But Margery was, by her own admission, quite chatty. She was a committed evangelist. On one particular pilgrimage, her fellow pilgrims asked her to remain silent during meals.

Margery, of course, could not.

She is compelled to share about Jesus: Afterwards it happened, as this creature sat at a table with her companions, that she repeated a text of the Gospel which she had learned before with other good word, and then her companions said she had broken her undertaking. And she said, "Yes, sirs, indeed I can no longer keep this agreement with you, for I must speak of my Lord Jesus Christ, though all this world had forbidden me."

They left her there.

Evangelism, it seems, is hard sometimes.

Along with her prolific verbal evangelizing, Margery also has the gift of tears; that is, the response of wailing and crying at the sight of images of Jesus being crucified. While she is praying with the image of the Pietà, we read:  [my] mind was wholly occupied with the Passion of our Lord Jesus Christ and with the compassion of our Lady, St. Mary, by which [I] was compelled to cry out very loudly and weep very bitterly, as though she would have died.

In another instance, Margery is so moved during the Good Friday service, she weeps bitterly at the image of Jesus’ crucifixion. Her priest, troubled by her emotional spirituality, comes to silence her. She shares:  Then the lady's priest came to her, saying, 'Woman, Jesus is long since dead.' When her crying ceased, she said to the priest, 'Sir, his death is as fresh to me as if he had died this same day, and so, I think, it ought to be to you and to all Christian people.'

Margery, quirky as she was, embodied a passionate, committed faith we are fortunate to have with us in her quirky, quotable words. 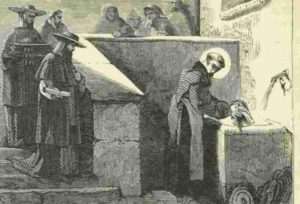 Brother Lawrence is embarrassed. He is a self-effacing, homely, and “so ordinary you could forget about him” kind of individual. Fame and accolades and VOTES are foreign to him as usually, he is the butt of the other monks’ jokes. Brother Lawrence is known for breaking plates, not breaking records. This new-found fame in this odd thing called Lent Madness has left him a little nonplussed.

In fact, the fame is kind of counter to all his beliefs laid out in Practice in the Presence of God. Brother Lawrence sees greatness not in winning a saintly “competition” but in God alone. However, Brother Lawrence is conflicted. On the one hand, his popularity in Lent Madness is both surprising and quite nice (“likes” feel good). On the other hand, it’s very distracting to his prayer life and his belief in the simple things. Brother Lawrence confesses to God that he would very much like for you to vote for him again, but ONLY if you take to heart his teachings and ponder them and apply them in your ordinary life.

1. You need not cry very loud: He is nearer to us than we think.
2. We ought not to be weary of doing little things for the love of God, who regards not the greatness of the work, but the love with which it is performed.
3. We ought to propose to ourselves to become, in this life, the most perfect worshippers of God we can possibly be, as we hope to be through all eternity.
4. The more we know Him, the more we will desire to know Him. As love increases with knowledge, the more we know God, the more we will truly love Him. We will learn to love Him equally in times of distress or in times of great joy.
5. And it is not necessary to have great things to do. I turn my little omelet in the pan for the love of God.
6. He does not ask much of us, merely a thought of Him from time to time, a little act of adoration, sometimes to ask for His grace, sometimes to offer Him your sufferings, at other times to thank Him for the graces, past and present, He has bestowed on you, in the midst of your troubles to take solace in Him as often as you can. Lift up your heart to Him during your meals and in company; the least little remembrance will always be the most pleasing to Him.

Go. Make an omelet. Live an ordinary life with God.