With just 128 days until Ash Thursday, the world is watching for Lent Madness news. It won’t be long until the 2021 bracket is revealed, and soon it will be time to order your Saintly Scorecards and bracket posters to get ready for the World’s Largest Online Lenten Devotion and also the World’s Oldest Continually Running Bracket Competition.

Until then, we’re left with other news. Our US-based readers will have seen the constant chaos that is the US political scene. While it’s true the Lent Madness sometimes hangs in the balance as Tim and Scott squabble as the sworn archnemeses they are, even the Supreme Executive Committee has nothing on the yellfest that was the recent “debate” between leading presidential candidates. No, the rumors are not true. Neither Tim nor Scott offered coaching on how to be an archnemesis.

But seriously, we know that many of our Lent Madness fans are distressed by the state of discourse in American politics. We long to be able to connect with people with whom we disagree, and we yearn for the deep peace of Christ. Whatever our political persuasion, we believe things could be better. Whatever our views, we hope for peace.

Our sponsors at Forward Movement are offering two resources that might be helpful.

If you’re not sure where to start when it comes to difficult conversations with people you disagree with, Forward Movement is offering a new, free ChurchNext class, Civil Conversations in Uncivil Times with Ray Suarez. 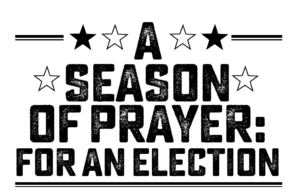 And it’s never a bad idea to pray. We can pray for our leaders and our nation, especially as the United States heads into an election. Forward Movement has partnered with the Episcopal Church’s Office of Government Relations to offer a nine-day season of prayer. This novena includes simple prayers from the Book of Common Prayer and a litany to say each day, starting one week before the election and ending the day after. Learn more at forwardmovement.org/election or, in Spanish, venadelante.org/eleccion.

If all else fails, remember that the saints in glory are companions on our journey. Whatever travails we face in our world, some of them have seen much worse. They can accompany us and guide us on the way.

All Brackets’ Day has been rescheduled this year because of Election Day. Tell all your friends and neighbors to gather around their computers in time to see the 2021 bracket unveiled at 8:00 a.m. Eastern time on October 27. We hope this bit of Gospel joy will brighten your day in an uncertain time.

37 Comments to "Voting When There is No Bracket"