Arnulf of Metz vs. Vincent of Saragossa

Like a fine wine or a craft beer, Lent Madness goes down smoothly with notes of penitence and joy. Fortunately, with today's battle, we have both possibilities at play. Arnulf of Metz is the patron saint of beer brewers; Vincent of Saragossa is the patron saint of wine makers. They have other identities as well, as you'll soon discover.

Yesterday, in what any commentators are calling a major upset, Catherine Booth doused Joan of Arc 63% to 37%.

You know, one of the things we love about Lent Madness is the ecumenical nature of both the bracket and the participants. We're happy to give our Lutheran friends some love, and bid you to check out the brilliant video podcast Reflections on Faith by the Rev. Tim Westrmeyer of St. Philip the Deacon Lutheran Church in Plymouth, Minnesota. Enjoy!

And then go vote. 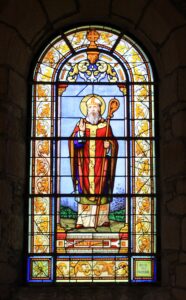 Very few saints have the pedigree of Arnulf (also Arnold, c. 582–642). He was born into the royal Merovingian dynasty and became the third greatgrandfather of Charlemagne.

Arnulf’s life and career began in politics. As an administrator and military officer, he was intimately involved in the palace intrigues and power plays of his day. This eventually led to his appointment as the bishop of Metz, a position imbued with both political and religious importance in the empire.

Whatever his faith life was before his ordination and consecration, the position seems to have transformed him. He was known to be generous with his wealth, redistributing it to those in need. The people of Metz faced constant threat of illness, so the bishop advised them to drink more beer, which was boiled in the brewing process, rather than the water of questionable quality. During one particularly virulent outbreak of illness, Arnulf plunged his pectoral cross into a brew kettle, telling his parishioners, “Don’t drink the water, drink the beer.”

Troubled by the violence among the royal houses and worried that he had contributed to the feuds, Arnulf tossed his episcopal ring into a river and prayed that God would return the ring to him as a sign that he had been forgiven for his earlier life. Legend has it that years later, a fisherman brought dinner to the bishop; cutting into the fish, they discovered the ring in its belly.

At about forty years old, Arnulf withdrew to the monastic life. With a few close friends, he lived as a hermit in the French mountains. The former courtier and bishop lived out the rest of his days in prayer and contemplation.

One more outpouring of grace awaited. In the middle of the summer of 642, a group from Metz traveled to Arnulf’s mountain retreat to gather their beloved bishop’s remains and return them to the city. Trudging over the hard terrain in the heat, the group came to an inn and stopped to refresh themselves. Unfortunately, the innkeeper only had enough ale for one mug. However, as they passed the one mug between themselves, the beer never ran out. All of them had enough and were refreshed. Arnulf reminds us of the importance of life’s second act, and the value of a refreshing mug of beer.

Collect for Arnulf of Metz
O God, our heavenly Father, who raised up your faithful servant, Arnulf, to be a bishop and pastor in your Church and to feed your flock: Give abundantly to all pastors the gifts of your Holy Spirit, that they may minister in your household as true servants of Christ and stewards of your divine mysteries; through Jesus Christ our Lord, who lives and reigns with you and the Holy Spirit, one God, for ever and ever. Amen. 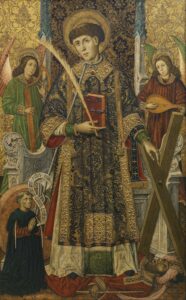 Vincent of Saragossa was the first Christian martyred in the country of Spain. He was killed under the persecution of the emperor Diocletian in the year 304 in the northeast of Spain.

Vincent was born in Huesca, near Saragossa. He was ordained a deacon and became a preacher and spokesman for the bishop of Saragossa, Valerius, who had a speech impediment. Together, they were brought to Valencia and tried by Dacian, the governor of Spain under Diocletian. Vincent suffered extreme torture—being stretched on a rack, torn at with hooks, and burned on a hot gridiron. Through it all, he remained peaceful and refused to denounce the gospel or burn the Bible. His tranquility while suffering such pain converted his guards, which is a common occurrence in the narratives of early Christian martyrs.

While the elderly bishop Valerius was punished with exile, Vincent died upon a bed of pottery shards. He was wrapped in a sack and thrown into the sea, but his fellow Christians recovered his body and carried it to a spot now called Cape Vincent in Portugal. It is believed that ravens protected his body from vultures, and they continued to guard the shrine where his relics were interred. When Arabs ruled the region, they named this shrine the Church of the Raven. In the twelfth century, Saint Vincent’s body was exhumed and brought to Lisbon to buried at the cathedral.

Vincent is a widely venerated saint, thanks to many popular hagiographies of the Middle Ages. There are churches that honor him all over Spain, including Castres on the pilgrimage route to Santiago de Compostela. When Christopher Columbus and his crew were the first Europeans to discover an island in the Caribbean on January 22, Saint Vincent’s feast day. Columbus named the island St. Vincent to honor the saint. Vincent is the patron saint of Valencia, Saragossa, and Portugal as well as wine, vinegar, and brickmakers.

His popularity reminds us of the power of the stories of the early Christians whose bravery and faith were so great they inspired the growth of the church. Vincent’s witness helps us remember not to oppress other minorities and reminds us that Christianity is a religion of peace, humility, and sacrifice, not domination or complacency.

Collect for Vincent of Saragossa
Almighty God, whose deacon Vincent, upheld by you, was neither terrified by threats nor overcome by torments: Strengthen us to endure all adversity with invincible and steadfast faith; through Jesus Christ our Lord, who lives and reigns with you and the Holy Spirit, one God, for ever and ever. Amen.

Arnulf of Metz vs. Vincent of Saragossa

171 comments on “Arnulf of Metz vs. Vincent of Saragossa”