Welcome to the final battle of the first full week of Lent Madness 2021 aka the Theodora Throwdown! Today it’s Theodora of Alexandria vs. Theodora the Empress. Only one Theodora will make it to the next round.

Yesterday Arnulf of Metz left Vincent of Saragossa to drown his sorrows 56% to 44%. Arnulf will face off against Egeria in the Saintly Sixteen.

Go ahead and catch your breath this weekend. We’ll be back for another engaging week of First Round battles bright and early Monday morning as Evagrius the Solitary tangles with Euphrosyne. But first, cast your vote! 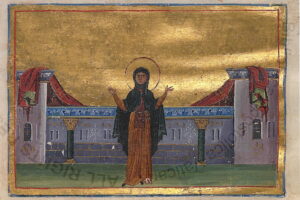 Theodora of Alexandria was a noble woman who was married to a wealthy Christian man. While her story is often conflated with Theodora of Egypt, tradition says that Theodora of Alexandria became a target of the devil. Threatened by her piety, the devil brought her to the attention of another rich man who became enamored with her. He bought her gifts and sent her love letters, but she was unmoved. Finally, he sent a young woman, a sorceress in some accounts, who told Theodora that if she gave in to the rich man’s advances at dusk or at night, God would not see. Theodora, in a moment of weakness, gave in and immediately felt guilt over her betrayal. She went to the local abbess who told her that God sees all, and she must perform penance. Theodora decided to join a monastery to do penance.

Worried her husband would find her if she joined a women’s monastery, Theodora cut her hair, put on men’s clothes, and joined a men’s monastery as Brother Theodore. She lived as a monk, with no one suspecting her secret.

Some years after joining the monastery, Theodora was sent on an errand in a faraway town. On the journey, she stayed the night in another monastery. According to Orthodox tradition, the daughter of the abbot attempted to seduce her. Theodora resisted. The daughter slept with another man and became pregnant. She accused Theodora of fathering the child. Eventually, the child was sent to Theodora’s monastery, and the abbot kicked her out with the child. Theodora saw the injustice as further punishment for her adultery. She tended to the child outside the walls of the monastery for seven years. Local shepherds gave her milk for the baby while she lived off of wild vegetables. When the abbot saw her persistence and fidelity, he invited her back into the monastery with the child.

After her return, Theodora lived two more years in the monastery until her death in 470. As the monks prepared her for burial, they discovered that she was a woman. The abbot called her husband to the monastery, and he became a monk and occupied her cell until his death. The boy she had raised and committed to God grew and followed her example of a virtuous life, ultimately becoming the abbot of the monastery.

Collect for Theodora of Alexandria
Almighty God, whose will it is to be glorified in your saints and who raised up your servant Theodora to be a light in the world: Shine, we pray, in our hearts, that we also in our generation may show forth your praise, who called us out of darkness into your marvelous light; through Jesus Christ our Lord, who lives and reigns with you and the Holy Spirit, one God, now and for ever. Amen. 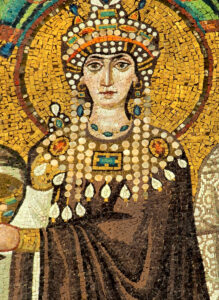 Theodora (500–548) knew her way around the hippodrome of Constantinople. Her father kept bears there, and her mother performed as an actress. When she was about four, her father died, and Theodora also became an actress. Rumors swirl around her. She was a stripper and a courtesan. One unreliable account described Theodora performing a lurid dance involving geese. It’s hard to know if these things are factually true or if the historian’s imagination created these juicy tidbits because he didn’t know how to get his head around understanding a woman of great power.

What we do know is that between the animal training and acting, Theodora learned how to soothe dangerous beasts and convincingly perform before great crowds, and both skills became the perfect  training for an adept politician. Those talents paired with extraordinary intellect, ambition, and wit catapulted Theodora from humble beginnings to the empress of the Byzantine Empire.

Theodora married Justinian I around 525 and ushered the Byzantine Empire into its golden years. During Justinian’s coronation, she was also crowned as an equal. She did not take the position of empress lightly. Her name can be found on every law that was passed at that time. And her commitment to gender equality extended beyond her self-interests. Theodora worked for gender equality, marriage rights, and anti-rape laws. She wrote papers against pimps and banished brothel-keepers from major cities. She opened a home for women and girls who wanted to transition out of sex work.

For our purposes, however, we should also consider her religious influences. Between Theodora’s time at the hippodrome and meeting Justinian, Theodora joined a religious community in Alexandria and converted to the non-Chalcedonian church, believing that Christ had only one nature and was fully divine. The debate was boiling up at this time, and Theodora aided and sheltered the non-Chalcedonians and kept the peace between the factions of Christianity. During their reign, Theodora and Justinian I constructed more than twenty-five churches, including Hagia Sophia, the largest Greek Orthodox church for more than 1,000 years.

Collect for Theodora the Empress
O God, who called your servant Theodora to an earthly throne that she might advance your heavenly kingdom and who gave her the wisdom to establish unity where there had been division; Create in your church such godly union and concord that we might proclaim the Gospel of the Prince of Peace, not only in correct theology but in right action; through the same Jesus Christ our Lord, who lives and reigns with you and the Holy Spirit, one God, for ever and ever. Amen.

118 Comments to "Theodora of Alexandria vs. Theodora the Empress"