Euphrosyne vs. Benedict the Moor

With Melangell no longer in the bracket, the most-difficult-name-to-pronounce award gets handed over to Euphrosyne, who takes on Benedict the Moor in today's Saintly Sixteen action. To get here, Euphrosyne made it past Evagrius the Solitary while Benedict took down Nino of Georgia. The winner of this matchup will face Camillus de Lellis in the Elate Eight.

Yesterday, Albert the Great remained that way as he defeated Theodora the Empress 63% to 37%. But enough rehashing old results. Go vote! 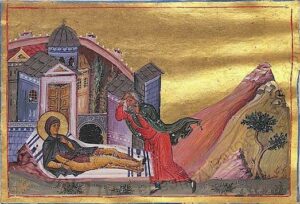 In Greek, Euphrosyne stems from the word meaning good cheer, merriment and joy. Although we do not see it overtly in her story, perhaps Euphrosyne’s sacrifice of self, led to a life of joy.  Do you live a life for joy?

Euphrosyne’s story centers around her desire to give up everything to live a life devoted to God. Could you sacrifice everything about yourself, to be completely transformed where no one recognized you, as a devotion to your Christian life? Is there a call so powerful in your life that you would forsake your identity for Christ?

Smaragdos lived an ascetic life. Separate from family.  Divorced from a relationship. Smaragdos’ father mourned her loss and the emptiness in his life. After a time of studying the tenants of Christ, Smaragdos revealed herself as Euphrosyne to her father once again to seek healing and reconciliation in a broken relationship. Do you have relationships that Christ is calling you to heal? To give up a part of yourself for reconciliation?

There are no words of Euphrosyne/Smaragdos recorded for posterity, but the Orthodox Church of Antioch penned the following chat in Euphrosyne’s honor:

Troparion (Tone 1)
As an ascetic you hid your womanhood
And your falling-asleep was an amazement, O Euphrosyne.
Though a woman, you toiled as a man,
And by your prayers you save those who honor you!

Kontakion (Tone 2)
Desiring the life on high and forsaking all earthly pleasures,
You lived as a man among men, O Euphrosyne.
For the sake of Christ your Bridegroom,
You spurned earthly betrothal.” 1

Euphrosyne asks us:  What of this life are you willing to spurn, to give up, to shed, to hide about yourself to devote your life fully to Christ? 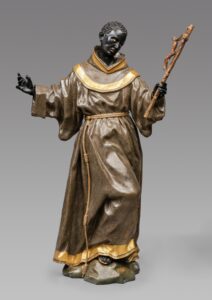 Very few of the words spoken by Benedict of Palermo (Benedict the Moor/African; 1526-1589) were recorded – and it is also likely that in his piety and following of the rule of Saint Benedict he actually said very few words.

Once while he was serving as the Superior of his order, some destitute neighbors and traveling soldiers arrived at the door of the Abbey. One of the other brothers observed that there was barely enough food for the monks in the Abbey to begin with.

Benedict replied: “No matter. Give alms to these poor people; God will provide for us.”

And indeed. There was enough.

This foolish generosity persisted in Benedict’s ministry, as he gave to others even when it seemed to put himself at risk. And repeatedly, God did provide.

A later chronicler would observe that “Father Benedict of Sanfratello was adorned with purity, simplicity, and the spirit of prophecy, and favored with the gift of ecstasy.”

Benedict was renowned for his gifts of insight and prophecy. He used these gifts to offer comfort to those who were suffering, walking alongside both visitors and fellow monastics in their times of grief and struggle.

He was often known to sit up through the night while a Novice was struggling with an illness. At times he predicted the end of an illness or struggle, offering the comfort of the end of a season. At other times, his words in the face of the suffering of life helped those who sought him out to be assured of the presence and comfort of God while walking through death’s valley.

Benedict was revered within his own life, and after his life was remembered by the community of Palermo and beyond for his holy living, generosity, and compassion. He was exhumed just three years after his death, and was found to be “incorruptible” – his body had not decayed.

But the influence of this child of enslaved persons was most strongly felt half a world away and two centuries later. Benedict’s official canonization happened at the beginning of the 19th century – the height of the transatlantic trade of African people as slave labor. He was held up as an example of how free Africans can flourish in white society – not just as laborers but as people of faith and contributors to their community. He has become known as the patron saint of African-American Roman Catholics.

Euphrosyne vs. Benedict the Moor