We hope you had a restful couple of days away from the saintly electoral process, because we’re back for another full week of exciting Lent Madness action. On Friday, just to catch you up, Theodora the Empress roundly defeated Theodora of Alexandria 75% to 25% to advance to the Saintly Sixteen, where she’ll face Albert the Great.

Sometimes the Saintly Smackdown involves well-known saints. The kind of familiar names and images you may see embedded in stained glass or molded into statuary in your own parish church. And at other times, Lent Madness features Evagrius the Solitary vs. Euphrosyne. Today is one of the latter days and, as always, we enjoy introducing lesser-known saintly souls to the Lent Madness faithful. Whether or not you’ve heard of today’s competitors, enjoy the ride!

Evagrius the Solitary (345-399), also known as Evagrius Ponticus, was born to a country bishop in the region of Pontus in Asia Minor. His life intersected with and impacted many of “the greats” we know today. Evagrius was ordained a lector by Basil the Great. He traveled to Constantinople and was ordained a deacon by Gregory of Nazianzus around 380. He became a protégé of Gregory when he went the way of the Jerry Falwell Jrs. of the world and became embroiled in scandal.

In Constantinople, the handsome Evagrius had an affair with a married woman and had to flee when he was warned in a vision of her husband’s impending revenge. Evagrius sauntered the streets of the Holy City until he had a mental and physical breakdown, ultimately finding refuge and the restoration of his health in a monastery in Jerusalem in 383.

It is only then, around the age of thirty-eight, that Evagrius left the monastery in Jerusalem to become a semi-eremetical monk in Nitria and later Kellia in Egypt. In this monastic arrangement, monks lived in individual residences under the supervision of an abba. Over the next sixteen years, Evagrius became a renowned spiritual teacher to this community of monks. His writings and teachings had significant influence on the development of western monasticism through translations from Greek to Latin and through his ardent admirer John Cassian, who, in turn, would significantly shape the Rule of Benedict of Nursia.

While Evagrius left many works, one of the most interesting (to me, anyway) is Talking Back, a treatise on the tactics needed to defeat the eight demons that undermine monastic life: gluttony, fornication, love of money, sadness, anger, listlessness, vainglory, and pride. This book is a collection of 498 biblical passages that a monk can use to “talk back” and cut off the demon. Evagrius is especially pointed on the demon called Love of Money. He argues that monks shouldn’t confuse sufficiency with economic security and that they should live on the edge of poverty, giving any surplus to the poor.

Evagrius was rigorous and relentless in his thought and practice. Indeed, his bodily regimen proved to be so harsh that he exhausted his health within a span of just a few years. He died on the feast of Epiphany in 399 just sixteen years after arriving at the monastery in Nitria and Kellia.

Collect for Evagrius the Solitary
O God, whose blessed Son became poor that we through his poverty might be rich: Deliver us from an inordinate love of this world, that, inspired by the devotion of your servant Evagrius, we may serve you with singleness of heart, and attain to the riches of the age to come; through the same Jesus Christ our Lord, who lives and reigns with you, in the unity of the Holy Spirit, one God, now and for ever. Amen. 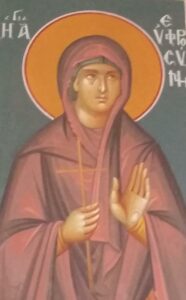 Many saints are born into wealthy families. It goes without saying that they are devout followers of Christ. It is also common for them to leave their wealthy, privileged lives when their families arrange a marriage that is distasteful. These saints all seem to be strong-willed, have a clear calling for God in their lives, and deeply want to serve rather than be served.

Saint Euphrosyne of Alexandria is no different. Born in fifth-century Alexandria, Egypt, Euphrosyne’s parents were an older, wealthy couple who had been unable to have children. They called on the abbot of the local monastery to pray over their infertility. Shortly after that, Euphrosyne was welcomed with joy and awe and as a sign of a miracle from God. However, her mother died shortly thereafter, and she was brought up by her pious father, who took her to the local monastery for reading, writing, and theology.

Like many other girls of her time, she was promised to another family of equal social station in Alexandria, and her dad began planning the wedding festivities. Euphrosyne was not pleased. And so she prayed. Her prayers led her to a decision to run away to the local monastery (the same one that prayed for her birth), dress as a male, take on the tonsure, take on a new name of Smaragdus, and proceed to perfect an ascetic life. The word “Smaragdus” means emerald, and Euphrosyne is also known as “The Emerald of God.”

People would pilgrimage from all over to learn from Smaragdus how to pray and center their lives solely on God. One of those individuals that traveled to the monastery to learn at the feet of Smaragdus was a man called Paphnutius. He was Euphrosyne’s father but did not recognize Smaragdus in the habit and tonsure.

This deception weighed on Smaragdus’s soul, and nearing death, Smaragdus told Paphnutius their identity. This commitment to Christ and willingness to serve God touched Paphnutius’s heart, and he, too, was called to take up the tonsure and habit and live out the rest of his days in the same monastery.

In honor of this ministry and witness, the church recognizes the feast of Saint Euphrosyne of Alexandria on September 25.

Collect for Euphrosyne
Merciful God, who looks not with outward eyes but discerns the heart of each: we confess that those whom we love the most are often strangers to us. Give to all parents and children, we pray, the grace to see one another as they truly are and as you have called them to be. All this we ask in the name of Jesus Christ, our only mediator and advocate. Amen.

119 Comments to "Evagrius the Solitary vs. Euphrosyne"