Whether or not you missed us this weekend is immaterial. Because we’re back! This week we’ll be finishing up the opening Round of 32 and kicking off the Saintly Sixteen on Thursday.

In case you missed the Friday results, Benedict the Moor defeated Nino of Georgia 68% to 32%. He’ll face Euphrosyne in the next round. Now go vote!

Henriette Delille (1813-1862) had a very specific education. She was the Creole daughter of a freed woman and a European father in New Orleans. Her parents had a common-law marriage under the plaçage system. In this system, European men entered into a common-law marriage with women of color. When the man became financially established, then he would marry a white woman. There was an understanding that he would continue to provide food, shelter, and education for children of the common-law marriage.

Henriette lived in the French Quarter, and she was groomed to follow in her mother’s footsteps and expected to marry a European man in New Orleans society. As a young woman, her mother educated her in literature, music, medicine, and dancing. Henriette wore fine gowns and made her rounds at the balls, while her mother hoped that she would make a match that would increase their family’s security.

When Henriette was a teenager, she gave birth to two sons. Both of them died at a young age. Henriette also began to teach at the local Catholic school for girls of color. During this time, her dedication to the poor in the city grew, and she began to question the plaçage system.

While her mother tried to entice Henriette with the trappings of New Orleans society, children in poverty captured Henriette’s attention. While the family tried to educate her so that she would be accepted in higher classes, she used her knowledge to educate slaves, even when the law prohibited their education. Henriette’s brother urged her to stop working with the Creole community, because it highlighted the family’s identity as formerly enslaved. While her family’s property was supposed to establish her family in New Orleans’ society, Henriette Delille used it to educate, care, and shelter.

Eventually, Henriette Delille found her identity in another family. She started the order of the Sisters of the Holy Family that was made up of free women. They provided nursing care for the elderly and a home for orphans. The order grew after Delille’s death, and the parochial schools that the order founded became instrumental in educating children in the Jim Crow South.

Collect for Henriette Delille
Almighty God, You gave to your servant Henriette special gifts of grace to understand and teach the truth as it is in Christ Jesus: Grant that by this teaching we may know you, the one true God, and Jesus Christ whom you have sent; who lives and reigns with you and the Holy Spirit, one God, for ever and ever. Amen. 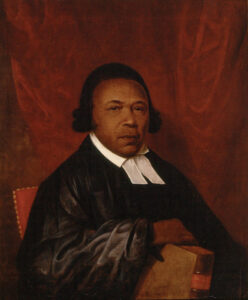 Absalom Jones was born in Sussex, Delaware, in 1746. After being sold to a farmer, that owner sold Absalom’s mother and the rest of his family to another slaveholder and moved with Absalom to Philadelphia, Pennsylvania, when Absalom was sixteen. Absalom’s owner was a member of Christ Episcopal Church, and when Absalom met and married his wife Mary, the priest of Christ Church married them in 1770.

Because children took the mother’s status in the colonial states, Absalom purchased his wife’s freedom so that their children would be born free. When Absalom was thirty-eight, his owner finally freed him. Absalom added Jones to his name since enslaved people were typically forced to take their owners’ names, and upon freedom, assumed their own names.

The Methodist church allowed Black people to attend and lead, and Absalom Jones and his friend Richard Allen were among the first African Americans to be licensed to preach in the 1780s. But being allowed to do something doesn’t mean being granted full authority and equality. When informed that they would be segregated to the church’s perimeter and balcony, Jones and most of the other African Americans walked out.

In 1787, Jones and Allen founded the Free African Society, an organization created to provide the African American community’s social, economic, educational, and spiritual needs in Philadelphia. The Free African Society established a strict code, including dues paid by all members to benefit those in need, mainly widows and orphans. The first African American church grew out of this organization’s commitment to Christian community and ethics. When the yellow fever epidemic hit the Philadelphia area in 1793, twenty times more Blacks than Whites helped those afflicted, thanks to The Free African Society. When the Society began to establish The African Church in 1792, Jones founded the African Episcopal Church of St. Thomas.