Isidora vs. Catherine of Genoa

Welcome to the first matchup of the week AND the last battle of the Saintly Sixteen. The first will be last, and the last will be first, apparently, and all that. Today we return to the ever-confusing Confusion Corner quadrant of the bracket as Isidora the Simple faces Catherine of Genoa. You'll recall that to get to this round, Isidora defeated Simeon the Holy Fool while Catherine took out her namesake from Bologna.

If you missed the results of Friday's fracas, Ives of Kermartin reached the Elate Eight by taking down Dunstan 67% to 33%.

And, since it's Monday, you'll want to keep refreshing your browser all day until Monday Madness miraculously shows up at some point. But in the meantime, go vote! 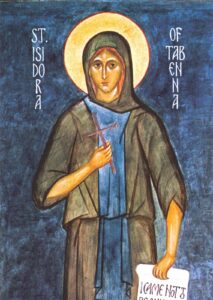 In the fifth century CE, Lausus, chamberlain to Emperor Theodosius II of Byzantium, commissioned Palladius of Galatia to write a history of the Desert Fathers, which thankfully also happens to include some Desert Mothers in it. It is from Palladius’s account that we know the story of Isidora the Simple, who he calls, “The Nun who Feigned Madness.”

This single anecdote is the only record we have of Isidora. The text of the Lausiac History reads, “In this monastery there was another virgin who feigned madness and possession by a demon.” Here he records how the other nuns despised her, refusing to eat with her, and that she willingly undertook the dirtiest and most strenuous labor, so that they called her, "the monastery sponge." Instead of a tonsure or cowl, like the other religious wore, she donned rags on her head. Palladius reports she satisfied herself with crumbs and the scrapings from the kitchen pots she washed. And although she was treated cruelly by the other nuns, “Never did she insult anyone nor grumble nor talk either little or much.”

It is only when the holy anchorite Piteroum seeks her out at the behest of an angel that Isidora’s true nature is revealed. He goes to the monastery of the Tabennesiot women, seeking a nun wearing a crown on her head, who he has been told is holier and better than him.  When the nuns had presented themselves and still he hadn’t seen the one with the crown, he asked who was missing. They replied, "We have one within [who is] mentally afflicted.” Isidora did come when called, and “perhaps perceiving what was the matter, or even having had a revelation,” Palladius speculates she is intentionally ignoring the summons out of her humility.

When she finally meets him, he sees the rag on her forehead and falls to his knees, asking “Do you bless me?” Farcically, she also falls at his feet and asks, "Do you bless me, Master?" The nuns believe she is mocking or parroting him and call her sale, which means a holy fool. And Piteroum turns the insult on the women. "You are sale. For she is abbess to all of us.” The nuns, finally seeing Isidora for what she was—devout and humble, not possessed or deficient, confessed their cruelty toward her.

Isidora, “unable to bear her glory and the honor bestowed by the sisters, and burdened by their apologies,” left the monastery never to be seen again. In this simple story of Isidora, we see how even those committed to God can fail to understand true humility, yet when we truly see saintliness like Isidora’s, we can surrender our pride and repent. 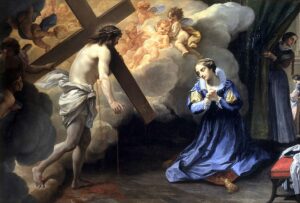 “Lenten fasts make me feel better, stronger, and more active than ever.”

So said Catherine of Genoa (1447 – 1510), and it is a fitting reflection for this season. Catherine’s spirituality was a deep and consuming mysticism – a personal connection to the Divine.

This deep, personal connection defined Catherine, as she put it: “My me is God nor do I recognize any other me except my God himself.”

This was not, for Catherine, a loss of self. Instead, it was an encounter with God’s love, a powerful and transforming force which became her guiding principle and source of meaning: “Love is a divine flame” and also “I shall never rest until I am hidden and enclosed in that divine heart wherein all created forms are lost, and, so lost, remain thereafter all divine; nothing else can satisfy true, pure, and simple love.”

Many a great mystic has written such words over the century while removed from daily life in a monastery or hermitage. But Catherine was immersed in the incarnate life – ministering to the sick in hospitals during the pandemics and plagues of 15th Century Italy. Reflecting on Catherine’s contribution to the world, in 2011 Benedict XVI said of her “the humble, faithful, and generous service in Pammatone Hospital that the Saint rendered throughout her life is a shining example of charity for all and encouragement, especially for women who, with their precious work enriched by their sensitivity and attention to the poorest and neediest, make a fundamental contribution to society and to the Church.”

Catherine applied her experience of God’s consuming love to the Medieval understanding of Purgatory. Rather than a land of fear and punishment, Catherine envisioned Purgatory as an even more personal encounter with the same powerful love she experienced:

“When God sees the Soul pure as it was in its origins, He tugs at it with a glance, draws it, and binds it to Himself with a fiery love that by itself could annihilate the immortal soul. In so acting, God so transforms the soul in Him that it knows nothing other than God; and He continues to draw it up into His fiery love until He restores it to that pure state from which it first issued.”

Even when it purifies and perfects, this love is not a source of fear but a joy and a motivation to living out our faith in the world. In Catherine’s words: “I find in myself by the grace of God a satisfaction without nourishment, a love without fear.”

With Catherine, may our Lenten fast lead us to encounter the Divine flame of God’s love, and drive us to a faith that is stronger and more active than ever.

Isidora vs. Catherine of Genoa

79 comments on “Isidora vs. Catherine of Genoa”