Today Jacapone da Todi squares off against Ives of Kermartin. Two lawyers in the same matchup? Who knew lawyers were even eligible for sainthood?! Will there be a legal landslide? Or will one of these attorneys be ruled out of order? In 24 hours we'll announce the verdict.

Yesterday, despite a strong showing by Henriette Delille, Absalom Jones got past her 54% to 46% to make it to the Saintly Sixteen, where he'll face Marianne Cope.

And if you've ever wondered about how the annual Lent Madness bracket is formulated, you won't want to miss yesterday's exciting episode of Monday Madness. Now go vote!

All the world is a stage, and God needs the highly dramatic to play a part. God found this person in Jacopone da Todi. Born around 1230 into a noble family, Jacomo became a successful lawyer and married a deeply religious woman. Jacomo was anything but deeply religious, instead concerned with attaining all the wealth he could, regardless of the human cost. His wife decided to atone for his sins by fasting and wearing clothing to signify her penance for his sins. She was killed in a tragic accident, and when Jacomo discovered his wife’s penitential practices on his behalf, he was shaken and stirred to focus his life on following God.

Following her death, he gave away all his possessions to the poor and entered a Franciscan Order as a layman and a wandering ascetic for almost a decade. During this time, Jacomo had some rather unusual prayer practices, including wearing a saddle, crawling on all fours, and appearing at a wedding tarred and feathered. Not surprisingly, he began to be known by the name Jacopone, which means “crazy Jim/James.”

Jacopone, a name he embraced, sought to be admitted to the Friars Minor, but given his reputation, they were cautious. In response, Jacopone composed a beautiful poem about the vanities of the world. His use of language, particularly in the vernacular of his region, not only led to his admission to the order in 1278, but he also left a legacy of elegant, prayerful language that remains with us today. He used his poetry to capture sorrow, condemn church corruption, call out kings and clergy for ignoring the welfare of the common people, and inspire the faithful.

Jacopone continued to be controversial and dramatic, managing to get himself excommunicated and imprisoned for being on the losing side of a reformation movement within the Franciscans. During his imprisonment, he composed the famous Latin Stabat Mater Dolorosa, a hymn that gives voice to Mary as she witnesses her son Jesus’ crucifixion, and is often sung on Good Friday in many Christian traditions.

At the end of his life, Jacopone retired to a convent of the Poor Clares. On Christmas Eve, in 1306, Jacopone sang a Christmas hymn, listened to the priest chant the Gloria at the beginning of midnight mass, and died.

Collect for Jacapone da Todi
O God, whose blessed Son became poor that we through his poverty might be rich: Deliver us from an inordinate love of this world, that we, inspired by the devotion of your servant Jacapone, may serve you with singleness of heart, and attain to the riches of the age to come; through Jesus Christ our Lord, who lives and reigns with you, in the unity of the Holy Spirit, one God, now and for ever. Amen. 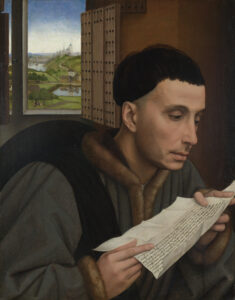 Ives lived, worked, and ministered in the thirtheenth century. As such, he could not have possibly known that he would have a lasting impact on the world, but he did, as evidenced by his nickname, Advocate of the Poor.

Ives is also known as Yves, Ivo, Yvo, Yves, Erwan, Iwan, Youenn, Eozenn, and Saint Ivo of Kermartin. He was a French priest and an important assistant to the bishop. He was also a lawyer, where he made his eternal mark.

Ives was born on October 17, 1253, in Brittany, France, the son of the lord of nearby Kermartin. After studying scripture, he was ordained in 1284 and served as a parish priest in Trédrez and Louannec, France. Ives studied civil law at the prestigious University of Paris and continued his education by studying canon law. He was known to lead a spartan life during his university years, focusing on learning, praying, and visiting the sick. Among his fellow students and colleagues was the great philosopher Roger Bacon.

Ives was tireless in his ministry of law. His life’s work was based on fairness, justice, providing dignity, and respecting the rights of all people, whether poor or rich, young or old, man or woman. He earned his title “Advocate of the Poor” for his defense of widows, orphans, and the poor.

Ives’s dedicated ministry sparked his appointment to the bishop’s staff, becoming an ecclesiastical judge while continuing his defense of poor people. Following a long career dedicated to both civil and church law, he died in 1303. Pope Clement VI canonized Ives in 1347. His feast is celebrated on May 19.

Ives is the patron saint of attorneys, legal professionals, paralegals, advocates, abandoned children, and the Brittany region in France. The honors live on, with numerous law schools and lawyers’ associations named for Saint Ives. He is often depicted with a money bag in his right hand, representing the assets he gave to the poor, and a scroll, signifying the law, in the other.

On his 700th birthday, Ives was honored with a tribute from Pope John Paul II: “The values proposed by Saint Ivo retain an astonishing timeliness. His concern to promote impartial justice and to defend the rights of the poorest persons invite the builders of Europe today to make every effort to ensure that the rights of all, especially the weakest, are recognized and defended.”

Collect for Ives of Kermartin
Almighty God, who gave to your servant Ives special gifts of grace to understand and teach the truth as it is in Christ Jesus: Grant that by this teaching, we may know you, the one true God, and Jesus Christ, whom you have sent; who lives and reigns with you and the Holy Spirit, one God, for ever and ever. Amen.