Origen vs. Hilda of Whitby

Yesterday, in a battle of healers, José Gregorio Hernández got past Constance of Memphis 59% to 41% to secure a spot in the Saintly Sixteen.

If you filled out a bracket in advance, how are you doing so far? Are your saints proving victorious or are you tasting the agony of defeat? New this year, you can always fill out a new bracket in advance of the Saintly Sixteen. Now go vote. 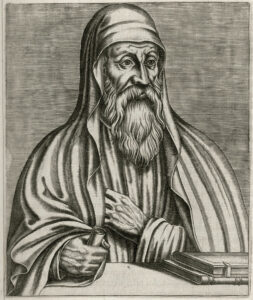 Without Origen, the church as we know it may not exist.

A native of Egypt born circa 184 CE, Origen is one of the earliest African theologians in history. His father, Leonides, was a devout scholar and Christian who taught Origen philosophy, literature and doctrine, and sowed the seeds of Origen’s rise to church leadership. Leonides was arrested, beaten, and ultimately killed for being a Christian.

Early in his life, Origen moved to Alexandria, Egypt, to teach at the church’s catechetical training center. Origen was well-known for his zeal in preaching the word of God and for his intense biblical study. Origen is considered the father of  homiletics and Christian apologetics, and he developed one of the first Bibles with the Hebrew text together with Greek translations and commentary. He was a prolific writer, credited with more than 2,000 (and sometimes up to 6,000) publications related to Christian spirituality and theology. During a time when there was little consensus on what it meant to be a Christian, Origen composed the landmark treatise, On the First Principles, the first known work of systematic theology.

Origen focused his teachings on mirroring Christ’s example in our words and deeds. Origen was known for taking unrelated scriptural texts and drawing spiritual conclusions and synthesis, and he is responsible for much of the early church’s doctrine. He was a devout believer in Christ and spent much of his life developing the foundational understandings of the Trinity and universal salvation. For these teachings, he was considered both a heretic and a saint, depending on the winds blowing in the church at that time.

Under Emperor Decius, Christian persecution flourished, and Origen was arrested, beaten, and died from his injuries in about 253. Some 200 years later, Emperor Justinian I declared Origen a heretic and ordered his writings to be burned. This caused a great amount of discord as Origen had been considered one of the greatest minds of the church. Origen’s life and works call us to deeply ask and systematically study and respond to the question, “What do we believe?”

O God, by your Holy Spirit you give to some the word of wisdom, to others the word of knowledge, and to others the word of faith: We praise your Name for the gifts of grace manifested in thy servant Origen, and we pray that your Church may never be destitute of such gifts; through Jesus Christ our Lord, who with you and the same Spirit lives and reigns, one God, for ever and ever. Amen. 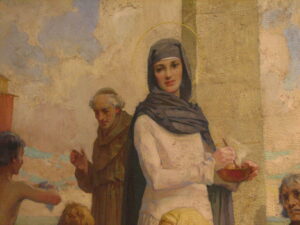 Hilda is not known for one spectacular moment, as some saints are. She is not known for a profound body of literature, as are other saints. In fact, nothing of her own writing exists. Instead, she is most commonly remembered for hosting a synod that had a significant impact on the Christian church.

Hilda (614-680) was the founding abbess of the monastery in Whitby, England. Much of the information about Hilda’s life is from the Venerable Bede’s The Ecclesiastical History of the English People. According to Bede, Hilda was born into the royal household of a region in Britain. After her father was poisoned, she found a home in the court of King Edwin of Northumbria, a relative. She was baptized along with King Edwin and his entire court in 627.

In 633, King Edwin was killed in battle, and his queen, along with Hilda and the queen’s companions fled to Kent, where the queen established a convent. Her sister implored Hilda to join her in Gaul (modern-day France). Hilda instead answered the call of Aidan, bishop of Lindisfarne, and returned to Northumbria to found a convent in the tradition of Celtic Christianity. She founded two monasteries before founding Whitby in 657.

Whitby, as all of Hilda’s monasteries, was a double monastery, where men and women lived and worshiped together. Property was held in common. Daily prayer and Bible study were required and works of peace and charity encouraged. Whitby became known, through Hilda, for its support of literature and culture.

Bede describes her as a woman of great wisdom and a skilled administrator. Many kings and princes sought her council, and it is no accident that the Synod of Whitby was held at her monastery in 664. At this synod, the church in England decided to follow the Roman rather than the Celtic path, a decision that would impact the course of Christianity in Great Britain.

Bede tells us that Hilda’s widowed mother, Breguswith, had a dream in which her daughter’s destiny was foretold. In this dream she suddenly became aware that her husband was missing and, after a frantic yet fruitless search, she found a valuable necklace under her dress. When she gazed upon the jewel, it brilliantly illuminated all of England. This vision was interpreted as foreshadowing the light Hilda was destined to shine on British Christianity.

Collect for Hilda of Whitby

O God of peace, by whose grace the abbess Hilda was endowed with gifts of justice, prudence, and strength to rule as a wise mother over the nuns and monks of her household: Raise up these gifts in us, that we, following her example and prayers, may build up one another in love to the benefit of your church; through Jesus Christ our Lord, who lives and reigns with you and the Holy Spirit, one God, now and for ever. Amen.

107 comments on “Origen vs. Hilda of Whitby”