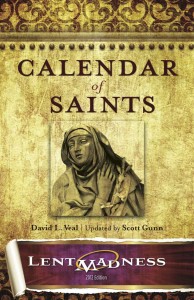 By now you have surely discovered the Lent Madness Channel with our weekly webcasts of Monday Madness. Well, friends, there is good news. The book that goes behind the movie is now available. It's only $6.99 for Kindle or Nook (ebook only!). Calendar of Saints: Lent Madness 2012 Edition is the ultimate guidebook for Lent Madness and devotional handbook for the saints of the Episcopal Church.

Back in 1972 (before Holy Women, Holy Men was a glimmer in anyone's eye), Canon David Veal wrote a book for Forward Movement called Saints Galore! It was popular. So popular that it was reprinted and updated a bunch of times, most recently in 2004. Canon Veal write brief devotional essays about each saint in the liturgical calendar of the Episcopal Church. These essays were intended to convey something of God's grace at work in the saints and to inspire us with the idea that God might work in our lives too.