Paul of Tarsus vs. Theodore of Tarsus

In the final battle of the First Round, Paul takes on Theodore in the epic Battle of Tarsus (you get extra Lent Madness points if you can find Tarsus on a map). The winner will do battle with Brigid of Kildare in the subsequent round.

Yesterday, in a hotly contested scrum between Margaret of Scotland and William Temple, Margaret ultimately emerged victorious 52% to 48% in heavy voting and commenting (119). Overall, it was a full day of Lent Madness news as the Supreme Executive Committee announced that they are threatening a lawsuit against some basketball tournament that uses "Madness" in the name. This led to an ensuing "controversy" over which virgin the state of Virginia was named after. Fortunately, this was all put into perspective on our Facebook fan page once a picture was posted of our two favorite voters, eight-year-0ld twins Hope and Skye of Burke, Virginia. Yes, that Virginia.

The Round of the Saintly Sixteen kicks off tomorrow with a fascinating match-up between two powerful and popular women, Joan of Arc and Mary Magdalene. Tickets are currently being scalped at astronomical prices. 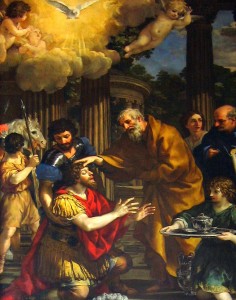 Paul of Tarsus (5-67), the most influential Christian convert of the Early Church, is best known for his zeal in spreading Christianity and for writing more New Testament books than anyone else. His conversion story, from persecutor to disciple, involves an appearance of Christ so real that Paul insisted on calling himself an Apostle even though he had never met Jesus during Christ’s lifetime.

Paul was raised a pious Jew. His zeal for the Jewish faith is detailed in the Book of Acts where Paul condoned the stoning of Stephen, Christianity’s first martyr. Paul was then famously converted on the road to Damascus when he was blinded, knocked off his horse, and addressed by the voice of Christ. Following this conversion his name was changed from Saul to Paul. He then set out on full-time missionary activities, helping spread the Gospel to early Christian communities throughout the Mediterranean.

Paul’s journey included incarceration, which is where he wrote several famous letters to his followers, including Galatians and Philippians. Fourteen epistles in the New Testament are attributed to Paul.

Paul took three missionary journeys, the final one ended in Rome where he settled as a tent maker and Christian leader. Christian tradition says Paul was beheaded during the reign of Nero around the mid-60’s. He is often depicted in art with a bald head. He shares his feast day with St. Peter who was crucified upside down, also in Rome, at the same time.

Collect for Peter and Paul: Almighty God, whose blessed apostles Peter and Paul glorified you by their martyrdom: Grant that your Church, instructed by their teaching and example, and knit together in unity by your Spirit, may ever stand firm upon the one foundation, which is Jesus Christ our Lord; who lives and reigns with you, in the unity of the Holy Spirit, one God, now and for ever. Amen. 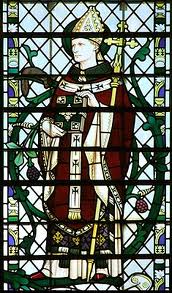 Theodore of Tarsus, also known as Theodore of Canterbury (602 - 690) was, according to the Venerable Bede, “the first archbishop [of Canterbury] whom all the English obeyed.” Tarsus was a city in Asia Minor (modern day Turkey), part of the Byzantine Empire, the same city that the Apostle Paul called home. At some point, Theodore moved to Constantinople and later to Rome to join a community of Eastern monks. At the age of sixty-six, he was appointed seventh Archbishop of Canterbury, a seat which had been vacant for four years.

Most of the information we know about Theodore comes from the aforementioned Bede, who reported that Theodore first of all had to grow out his hair for four months so he could switch from the Eastern to the Western tonsure. Soon after his consecration, Theodore traveled around England, appointing bishops (there were many vacancies due to the plague) and reorganizing dioceses to make them of manageable size for both pastoral care and administration. Upon his return to Canterbury he drew up a book of canon law to organize the Church in England, a diverse church of Roman, Celtic, and Anglo-Saxon Christians. Theodore, perhaps because he was a Greek who lived in many places himself and was an outsider, was able to bring all the parties together into one Church despite the ill feelings engendered from the Council of Whitby’s decision in 663 to favor Roman over Celtic practices in Britain.

Theodore also established the influential school at Canterbury modeled on the great school in Antioch where Theodore himself may well have studied. Latin and Greek, poetics, computistics (the calculation of the church calendar, which was a big issue in that time and place), astronomy, Biblical exegesis and church music were taught at the Canterbury school. The liturgical use of sacred music as taught at Canterbury (which included Roman chant) spread throughout England during Theodore’s archbishopric.

Theodore served for twenty-two years as Archbishop of Canterbury and died at the age of eighty-eight. He is venerated as a saint in both the Anglican (including The Episcopal Church) and Eastern Orthodox churches. His feast day is celebrated on September 19.

Collect for Theodore of Tarsus: Almighty God, who called your servant Theodore of Tarsus from Rome to the see of Canterbury, and gave him gifts of grace and wisdom to establish unity where there had been division, and order where there had been chaos: Create in thy Church, we pray, by the operation of the Holy Spirit, such godly union and concord that it may proclaim, both by word and example, the Gospel of the Prince of Peace; who lives and reigns with you and the Holy Spirit, one God, for ever and ever. Amen.

Paul of Tarsus vs. Theodore of Tarsus

103 comments on “Paul of Tarsus vs. Theodore of Tarsus”