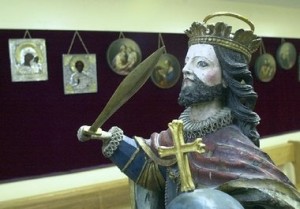 Shockingly, not everyone loves Lent Madness as much as we do. As the global media frenzy took hold this week, we’ve noticed a few online comments that have been less than flattering. It would be easy to get indignant, defensive, etc: “But we have God on our side! And saints! And a whole army of Lent Madness fans!”

But the fact is, we just like these quotes too much to let them go unnoticed, even as today’s battle between Joan of Arc and Mary Magdalene opens the Round of the Saintly 16. Thus we offer you a few examples for your reading pleasure.

“I’m sitting here with mouth a-gape. It feels like this exercise mocks all that’s holy. Is it just me? I would think there would be other “fun” ways to introduce the participants to the lives of the saints without offending the sensabilities (sic) of other Christians.”

If we were literally able to “mock all that’s holy,” I’d say that’s a pretty impressive accomplishment, wouldn’t you? I mean, there’s an awful lot of holy stuff out there. And, as one subsequent commenter put it, “Oh, Maria…Seriously? This is a great way to get people more involved with their faith. Come on, girl–lighten up! PS: Yes, it’s just you.”

Robin Jarrell posted the following on our Facebook fan page:

“I find this whole endeavor very troubling. Look at the wording: “pits” and “smackdown” recalls the roman gladiatorial games where some of our dearest saints were martyred. Wasn’t it the Roman Empire that killed Jesus as non-violent threat to Caesar? I guess this type of genuflecting to the American Empire is what happens when we leave the leadership of the church the hands of a couple of boys.”

Our initial reaction to this one was “she called us leaders of the church!” Then we replied: “Actually, the leadership of the Episcopal Church in the USA belongs to Presiding Bishop Katharine Jefferts Schori and Bonnie Anderson, President of the House of Deputies. They are not boys. On the other hand, Lent Madness is meant to be fun. If it is not fun for you, we’re sorry. Really. Others are enjoying the festivities while they learn about God’s work in the lives of women and men through history.” Plus, it’s no longer called “genuflecting.” It’s Tebowing.

This from “markstra” on the Religious News Service website:

“There is NO scriptural support for Lent nor churches creating “saints” either. Every Believer in Jesus since 30 AD has been a saint and all Believers who follow Jesus’ teachings in modern times are saints.”

Well, besides Jesus wandering in the wilderness for 40 days. Sounds like someone needs to take their three-legged stool (Scripture, Tradition, Reason) in for repair.

Ultimately, we realize that Lent Madness is not for everyone. Some might even resent the Colbert-esque pomposity of the Supreme Executive Committee. The good news is that while Lent is not optional for Christians, Lent Madness is. Sure it’s their loss and, as we like to say, “There’s nothing worse than a humorless Christian.” Or, as Tim was quoted eloquently stating in the Toledo Blade, “If God doesn’t have a sense of humor, I’m hosed.”