Welcome to the third (of four) Lent Madness Play-In rounds! Today we have two early American bishops going at each other with the winner facing off against Hilda of Whitby in the First Round and the loser going home to do whatever bishops do when they sulk.

While one of these bishops is most closely identified with Berkeley Divinity School at Yale and the other is linked to Seabury-Western Thelogical Seminary, please don’t view this as a battle between Tim (Seabury) and Scott (Berkeley). They are the height of non-partisanship and integrity when it comes to Lent Madness (though bragging rights are highly desirable in this case).

While Lent Madness contests should never be viewed as a competition between our remarkable Celebrity Bloggers, it’s worth noting that this marks the debut of the Rev. David Sibley as he advocates for Samuel Seabury. Welcome to the Madness! It’s also worth noting that in this Battle of the Preaching Tabs both David and Berkeley’s advocate, the Rev. Neil Alan Willard, both try to work the all-important snark vote.

If you need more motivation to vote (and since you’re already here you probably don’t), check out the mysterious Maple Anglican’s short video about this contest. Oh, and don’t forget to “like” Lent Madness on Facebook. We never post cat videos. 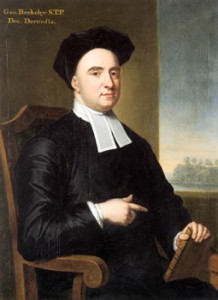 10. George Berkeley (1685-1753) was an Irish philosopher and Anglican bishop. Blessed with philosophical powers, he is therefore entitled to his own action figure. Where, pray tell, is Samuel Seabury’s action figure? [Cue the sound of crickets chirping.]

9. Berkeley believed that material objects exist only because they are perceived by the mind. Some people mocked this notion, stating, for example, that a tree would cease to exist if no one happened to be walking past it. Berkeley’s response to this objection was put into a humorous limerick by someone: “Dear Sir: Your astonishment’s odd. / I am always about in the Quad. / And that’s why the tree / Will continue to be / Since observed by, Yours faithfully, God.”

8. In 1734 he published a book entitled The Analyst; Or, A Discourse Addressed to an Infidel Mathematician. Who hasn’t dreamed of writing a lengthy essay such as this after becoming frustrated with math homework? Humanities students unite! Vote for Berkeley!

7. According to Judith Grabiner, an award-winning historian of mathematics: “Berkeley’s criticisms of the rigor of the calculus were witty, unkind, and — with respect to the mathematical practices he was criticizing — essentially correct.” So math majors and snark enthusiasts should also cast their votes for him

6. For $25 per year one can become a card-carrying member of The International Berkeley Society, “which was founded to enable its members to share their interest in George Berkeley, Bishop of Cloyne, the eminent philosopher and theologian and to be aware of his impact on philosophy, theology, science, and culture of western civilization, both past and present.”

5. The Oxford Dictionary of the Christian Church, Third Edition Revised, has an entry about George Berkeley on page 193 that takes up at least three-quarters of a column. Its entry about Samuel Seabury is stuck way at the back on page 1486 and takes up less than half a column.

4. Berkeley Divinity School at Yale is named after him. That’s appropriate since he was not only a person of faith but also an intellectual. One need not check one’s mind at the church doors.

3. The city of Berkeley, California, is also named after him. Strange but true.

2. Although Berkeley Divinity School at Yale and Berkeley, California, both use the pronunciation BERK-lee for themselves, serious students of religion and philosophy know that BARK-lee is the proper way to refer to the bishop himself. Voting for George Berkeley is the best way to show others that one knows how to pronounce the man’s name correctly.

1. Berkeley Divinity School at Yale possesses the writing desk of that other bishop, Samuel Seabury, which serves as the altar in St. Luke’s Chapel at the Berkeley Center, 363 Saint Ronan Street, New Haven, Connecticut. I’m not sure what relics of George Berkeley are in possession of Seabury-Western Theological Seminary. Come to think of it, I’m not sure where Seabury-Western Theological Seminary is these days. Since, however, it’s still perceived in the mind of God, I’m sure — thanks to the philosophical writings of George Berkeley — that it does continue to exist somewhere. 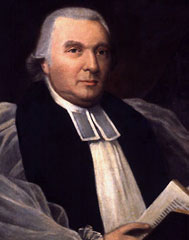 10. Samuel Seabury literally put the “Episcopal” in the Episcopal Church: he was the first American Bishop.

9. Seabury felt called to be a priest at a very young age; and, because he was too young to be ordained after his graduation from Yale, went to Edinburgh to study medicine –- you know, just to pass the time until he could be ordained.

8. Seabury abounded in fidelity to his understanding of his call. During the Revolutionary War, Seabury – who was a staunch Loyalist and defender of the Crown and Church of England – was arrested, and paraded around upon his imprisonment. His family was beaten and his possessions plundered, and his wife ultimately died during that period. Seabury believed the only course for him would be exile in England – not a hearty prospect for someone who was born and raised in Connecticut.

7. Seabury’s fidelity to his call, however, transformed his life. He was ultimately chosen by clergy in Connecticut in the spring of 1783 to be the First American Bishop – but, despite his Loyalist tendencies, he was ultimately unable to be consecrated in England – because he refused to swear the required oath of allegiance to the King.

5. In fact, he didn’t have a problem with much of anything about Eucharist at all – in  1789, he wrote a letter to his diocese – “An Earnest Persuasive to More Frequent Communion” – in which he expressed his desire that churches celebrate the Holy Communion every week – an opinion that set him apart from the vast majority of the church at the time, and ahead of his time liturgically.

4. Seabury’s writing proved he could be pointed, and yes, a bit snarky. In his letter on Communion, he wrote: “It is to be feared there are some who never think enough of the subject to make excuses about it. To these I have nothing to say at present.… I hope none, among you [are] in so hopeless a condition.” Reports do not say whether he gave opponents of weekly communion the silent treatment, but your author chooses to think he did. [Edited for premium snark value.]

3. Seabury was instrumental in the founding of King’s College, New York – which would later become Columbia University. Columbia has produced well over 50 Nobel Laureates, minds that led such advances as the splitting of the atom and the development of the laser.

2. Seabury is now remembered in many provinces of the Anglican Communion – including the Church of England that once denied him episcopal consecration – on November 14.

1. And finally, how can one not vote for someone who rocks the rochet and chimere with such gusto as our first bishop? His portrait was often described as picturing a giant standing against the whirlwind, of the times. He did just that, and for his resilience and fortitude, he remains a giant, and worthy of your vote.

87 Comments to "Play-In Round: George Berkeley vs. Samuel Seabury"