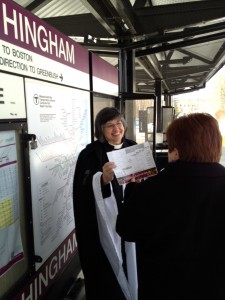 Based on the overwhelming response to last year’s Brackets to Go, it was decided to offer it again this year. You know, it’s important to take the brackets to the people, rather than expecting the people to come to the brackets. Spreading the good news of Lent Madness at train stations ’round the world is just part of how we roll.

In the photo on the right, you’ll notice that the bracketifer has even colored the train’s map sign purple. It’s another way of proclaiming Lent Madness to a world in search of voting direction.

People were, as you’d expect, moved by the experience. One recipient said, “With St. Chad of Lichfield in the bracket this year, I’ve been so worried about dimpled chads that I was afraid to print my own bracket,” adding, “you’ve taken my fear away.” Another person, named Martin, was thrilled, saying, “I’m so excited that the people of Lent Madness would seek out wandering souls like me, eager to make connections with first-round saints, such as Martin Luther and Martin Luther King, Jr. and Martin of Tours” In a flat rebuttal to those who think Brackets to Go is trite, Martin continued, “I will come to adult formation at the nearest Lent Madness parish, because I’m really confused about whether to vote for ML or MLK or MOT.”

One clergy bracketifer shared her experience, “It was so moving to tenderly place the brackets into people’s outstretched hands.” Her lay assistant said, “Setting aside that egregious split infinitive, I agree. This was an amazing experience of providing reassurance that Lent Madness encompasses an inclusive array of saints, with at least one saint to which each person can connect.” The bracketifer nodded in agreement, also impressed by the assistant’s grammar.

The Supreme Executive Committee declined to issue a statement, seeking to empower the bracketifers, whether lay or clergy, to speak for themselves. Seeing an opening in the media limelight, another bracketifer contacted the reporter. “I don’t understand why anyone would oppose this amazing experience of taking Lent Madness out of the interwebs and into the streets. Lent Madness is too important to keep to ourselves.”

NOTE: The SEC is having a bit of fun with the Ashes to Go media sensation. We’re not mocking it, but rather riding the coattails of this internet meme. One member of the SEC has gone on record in support of Ashes to Go. So there.