After a bruising match-up between two heavyweights, I think everyone's ready to get back to a bit of Lent Madness "normalcy." Yesterday's match-up had emotions running high as Martin Luther King, Jr. took on Martin Luther. This was like Kentucky squaring off against Duke in the first round or Borg taking on McEnroe in a Wimbledon qualifier. It wasn't fair; it was mean; it was diabolical; it was Lent Madness.

In the end, Martin Luther King advanced in heavy voting 55% to 45% sending his namesake to the heavenly showers. We were happy to welcome many of our Lutheran brothers and sisters to Lent Madness and we encourage you to stick around! Who knows? Maybe we'll have an Oktoberfest-themed play-in round next year.

Today we have a 7th-century Celtic saint taking on the first woman ever ordained in the Anglican communion. The SEC is paying special attention to issues of voter irregularity in case supporters of "Hanging Chad" of Lichfield try any funny business. We expect heavy, if controversial, voting from Broward County, Florida.

In case you missed yesterday's edition of Monday Madness, Tim and Scott reveal some interesting news about the timing of the pope's retirement and announce a rare joint appearance coming up later this week. 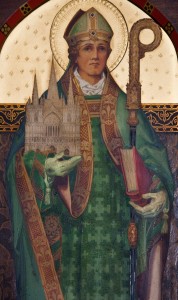 Chad (or, in Celtic spelling Ceadda), was one of four brothers who lived lives in service of the Church. Chad was a native of Northumbria, and was a pupil of St. Aidan of Lindisfarne. Chad’s eldest brother, Cedd, was Abbot of a large monastery at Lastingham. Upon his brother’s death in 664, the abbacy passed to Chad. The Venerable Bede recounts that Chad was “a holy man, modest in his ways, learned in the Scriptures, and zealous in carrying out their teaching.”

The Venerable Bede notes that during Wilfrid’s absence, the King of Northumbria became impatient with the vacancy and decided to take further action. Impressed by Chad’s holiness, the King appointed him to take Wilfrid’s place as Bishop of Northumbria. Chad encountered the same problems in tracking down bishops as Wilfrid did; ultimately, he traveled to Wessex, where he was irregularly ordained bishop by two British and one Welsh bishop – none of whom were recognized by Rome. Bede recounts that Chad diligently set himself to the work of administering his see.

Later that same year, the King of Mercia requested a Bishop. Remembering Chad’s example of humility and holiness, Archbishop Theodore recalled Chad from his retirement to Lastingham, and had him re-ordained as a bishop. Chad’s humility was most acutely seen when he refused to use a horse to travel his diocese, preferring to follow the example of the apostles by walking. Archbishop Theodore ultimately ordered Chad to use a horse for his longer travels, and Bede recounts that the Archbishop once went so far as to lift Chad into the saddle on one occasion.

Collect for Chad of Lichfield
Almighty God, for the peace of the Church your servant Chad relinquished cheerfully the honors that had been thrust upon him, only to be rewarded with equal responsibility: Keep us, we pray, from thinking of ourselves more highly than we ought to think, and ready at all times to step aside for others, that the cause of Christ may be advanced; through him who lives and reigns with you and the Holy Spirit, one God, now and for ever. Amen. 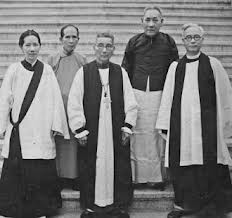 Born on May 5, 1907, in Hong Kong, she was named Li Tim-Oi by her father, which means "much beloved daughter." She took the name Florence when she was baptized as a student, because she came to respect the example of Florence Nightingale so much. From the time she was born, Florence Li Tim-Oi was encouraged to believe and to live into her essential, God-given worth.

At that time, women were allowed to be ordained 'deaconesses,' and it was at one of these ordinations in 1931 that Florence first felt a call to the ordained ministry herself. She pursued a theological degree in Canton, and was ordained to the diaconate in 1941. Upon her ordination, the local bishop assigned her to a congregation all her own in Macau.

Macau was, at the time, a Portuguese colony that was filling up with Chinese refugees who were fleeing from the war in the Pacific. Florence had her hands full, but she was on it. She fed those who needed food, started a huge Sunday school for the kids, educational opportunities for the adults, and ran the congregation by herself. This was great news for the congregation, but soon presented an eccesiological conundrum for the bishop. Because of the war, no priest could get to Macau to celebrate the Eucharist.

So, after pondering this puzzle for a bit, and flying over to the US to talk this over with Reinhold Niebuhr, the local bishop, Ronald Hall, came to a conclusion, and in January, 1944, Florence became the first woman ordained to the priesthood in the Anglican Communion. She literally had to sneak through the Japanese army’s encampment to attend her own ordination.

She served as a priest in Macau until the war ended in 1946, and word got around in the Communion about what had happened. Consternation ensued. To keep the peace in Dodge/Lambeth, Florence relinquished her license to officiate, but she never, ever renounced her vows.

For the next thirty years, she lived as a Christian priest in secret, living the gospel in silent deeds. She went to help a parish near the Vietnam border, as a lay minister. She started a large maternity home trying to ensure the survival of infant girls. When the Communist takeover hit China, she was under constant suspicion by the authorities. At one point, the Red Guards made her cut up her own vestments with scissors.  She was removed from her parish and made to work on a chicken farm. She was sent to re-education camps and brainwashed.

Finally, she resumed ordained parish ministry in 1981 when she moved to Toronto. She died in 1992, but not before she saw women accepted as priests in other corners of the communion.

Collect for Florence Li Tim-Oi
Gracious God, we thank you for calling Florence Li Tim-Oi, much beloved daughter, to be the first woman to exercise the office of priest in our Communion: by the grace of your Spirit, inspire us to follow her example, serving your people with patience and happiness all our days, and witnessing in every circumstance to our Savior Jesus Christ, who lives and reigns with you and the same Spirit, one God, now and forever. Amen.

144 comments on “Chad of Lichfield vs. Florence Li-Tim Oi”