Today's matchup features two Roman Catholics, the martyred archbishop of El Salvador and an American nun known for her charity and educational work. See, we're doing our part for Christian unity here at Lent Madness. However, lest you think this was a diabolical attempt to pit them against one another, don't forget Dorothy Day is yet to come.

Yesterday, Janani Luwum trounced Thomas Tallis 69% to 31% and will face fellow martyr Jonathan Daniels in the Round of the Saintly Sixteen. While Archbishop Luwum was a virtual Lent Madness unknown, his inspiring story clearly touched many in profound ways.

Perhaps the biggest story in Lent Madness circles was the resolution of the 2013 Mug Controversy. That collective sigh of relief heard 'round the world was confirmation that Tim finally received his Lent Madness mug, thereby preserving the Lenten Detente between the two members of the Supreme Executive Committee. 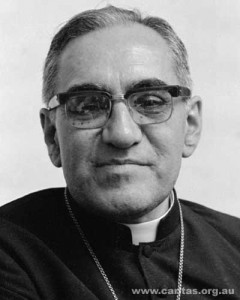 Oscar Romero was born in Cuidad Barrios, El Salvador, on August 15, 1917. He wanted to be a priest, but his family, like almost everyone else, was poor. He had to drop out of seminary several times before he was ordained, to work as a carpenter. But he finished, he excelled, and he was named a bishop of the Roman Catholic Church in 1967.

Romero was known as a quiet, academic type. He had studied at the Vatican in Rome. He was conservative, unlikely to make waves or to upset the status quo. Because of this reputation, in 1977, he was elevated to archbishop of San Salvador, the highest church office in the country.

At the time in El Salvador, 90% of the population lived on less than $100 a year. 200 families owned 75% of the farmable land. A quarter of the children died before the age of five and the average life expectancy was 46 years old. All labor unions were forbidden by law.

A number of the Catholic priests and nuns had begun to question this, to ask what the Christ who healed the leper and befriended the impoverished would make of this situation. Romero's conversion process had begun when he worked with the poor as a local bishop, but when a dear friend was assassinated by a death squad, it was complete.

Weeks after becoming archbishop, Romero called a meeting of all the clergy, priests and nuns, in the country, to figure out how to respond to the assassination of clergy. He canceled all Catholic services in the country, save the funeral mass at the cathedral in San Salvador where he was preaching. This forced everyone, rich and poor alike to attend the same mass, or commit a major sin.

From this time forward, he broadcast every mass from the cathedral on the radio. Everyone heard his sermons, and he became known as the "Voice of the Voiceless."  He called on the government to stop the death squads. He called on the soldiers to disobey orders to kill. He called on the rich to support reform. He established a permanent diocesan commission to discover and document human rights abuses in the country. Again and again, he used his authority and power as archbishop to throw the considerable weight of the church behind the oppressed and the victimized.

On March 24, 1980, he was celebrating mass in a small hospital chapel, when he was shot by an assassin whose identity remains unknown. At his funeral, bombs exploded among the 50,000 mourners, killing at least 40, and making Romero's last sermon even more poignant: "Those who surrender to the service of the poor through love of Christ will live like the grain of wheat that dies...The harvest comes because of the grain that dies."

Collect for Oscar Romero
Almighty God, you called your servant Oscar Romero to be a voice for the voiceless poor, and to give his life as a seed of freedom and a sign of hope: Grant that, inspired by his sacrifice and the example of the martyrs of El Salvador, we may without fear or favor, witness to your Word who abides, your Word who is life, even Jesus Christ our Lord, to whom with you and the Holy Spirit, be praise and glory, now and forever. Amen. 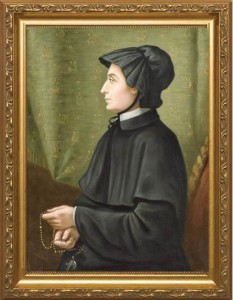 Born in 1774 into a prominent Episcopal family (her maternal grandfather was rector of St. Andrew’s, Staten Island), Elizabeth Ann Seton grew up a devout Episcopalian. Her spiritual director while a member at Trinity Wall Street was John Henry Hobart, later Bishop of New York, and her wedding was performed by Bishop Sam Provoost. In 1797, as a 23-year-old wife and socialite, she was one of the founders of the Society for the Relief of Poor Widows with Small Children, the first private charitable organization in New York City, serving as its treasurer.

In 1798, her husband, William Seton, took over the Seton family shipping and mercantile business, which fell on hard times. Facing both bankruptcy and tuberculosis, in 1803 William took Elizabeth and the eldest of their five children, Anna Maria, to Italy in hopes of regaining his health and connecting with a former business connection, Filippo Filicchi. Unfortunately, as news reached Italy of Yellow Fever in New York, instead of recovering in the Italian sun, Seton and his wife and daughter were quarantined in stone barracks. Days after the family left quarantine, William died, leaving Elizabeth, now 29, a poor widow with five small children.

Staying with the Filicchi family, Elizabeth was introduced to Roman Catholicism and found herself drawn to its sacraments and worship. As she wrote to her sister-in-law, “[Y]ou know how we were laughed at for running from one church to another, sacrament Sundays, that we might receive as often as we could; well, here people that love God…can go every day.”

Returning to New York City, she was received by the Roman Catholic Church but rejected by her friends and family, some of whom disinherited her. An impoverished single mother, she ran a boarding house for boys attached to St. Mark’s, New York, but parents withdrew their children upon learning of her religion. After the conversion of Elizabeth’s young sister-in-law to Catholicism, even Bishop Hobart warned others to cut off any communication with her.

Invited to Baltimore to begin a school, in 1810 Elizabeth founded St. Joseph’s Academy and Free School in Emmitsburg, Maryland. This school for girls from poor families as well as paid boarders became the foundation for the parochial school system in America. She trained the sisters to be teachers and wrote the textbooks. In 1812, she established the first religious order for women in America, the Sisters of Charity, which under Mother Seton’s leadership established orphanages in Philadelphia and New York City. She also worked to assist Baltimore’s poor and sick all while continuing to care for her own children. She died in 1821 at the age of 46.

Collect for Elizabeth Ann Seton
Holy God, you blessed Elizabeth Seton with your grace as wife, mother, educator and founder, that she might spend her life in service to your people: Help us, by her example, to express our love for you in love of others; through Jesus Christ our Redeemer, who lives and reigns with you and the Holy Spirit, one God, for ever and ever. Amen.