Purple Buzz on the Interwebs

Around the globe, excitement is building as we approach the tip-off of Lent Madness 2013. We expect most sermons tomorrow will be about Lent Madness, so we're providing some fodder for you last-minute sermon writers. However, we do not encourage a reading from USA Today in lieu of the Gospel, as tempting as that might be. Here are some buzzing bits from around the interwebs. 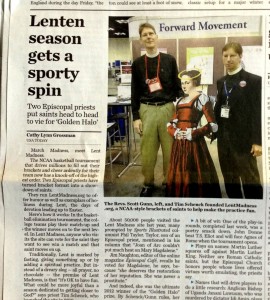 On Thursday, hotel guests around the world had their breakfasts interrupted with a photo of the Supreme Executive Committee on the pages of USA Today, along with a pretty great article. Tip of the hat to Jim Naughton from the Episcopal Café for mentioning the story to the right people at the right time. We expect that, due to incredible Lent Madness fandom, everyone at the Episcopal Café is now sipping their coffee from Lent Madness mugs. They are a café, right?

In a more sober and inspiring vein, someone struggling mightily with disease has been looking to Lent Madness to provide her some joy in the weeks ahead. Out of respect for her privacy, we won't link to her journal, but we ask your prayers for her and for all those seeking hope. May Lent bring renewal to us all, and may Lent Madness bring joy.

We're glad to see some dioceses on the Lent Madness bandwagon. The dioceses of Newark, Arizona, Lexington, Washington, and Texas are on board. Perhaps we're most impressed by the Diocese of Hawai'i, which has Lent Madness front and center. Last year they got behind local hero Queen Emma, and she went all the way to the championship. This year, it looks like they're rallying behind Damien of Molokai, who has a firm connection to Hawai'i.

Last year, we thought it was cool when we appeared on the pages of the Washington Post, but we're more excited this year to appear on the pages of St. Paul's K Street monthly newsletter. Yep, you heard it right. Being Anglo-Catholic, how long can it be before they have Solemn Evensong and Benediction of the Golden Halo, or the until the choir leads the congregation in chanting of the Litany of Saints (In The Bracket)?

Minnesota is a big Lent Madness stronghold. We've heard from St. Clement's and St. Paul's on-the-Hill, both in St. Paul. Purple fever is strong there. You can see a photo from St. Paul's on-the-Hill on our Facebook page. Of course, it's not just Episcopalians who get Lent Madness, as evidenced by a certain Methodist congregation in the distant realms of Idaho. In the heartland, you'll find plenty of Lent Madness fans at St. Thomas, Overland Park, KS. Back east, you'll be able to have a big debate over the merits of various saints at coffee hour if you show up at Cunningham Chapel in Virginia. 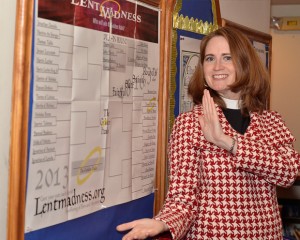 Our own Celebrity Blogger is rocking both Lent Madness and clerical fashion, as evidenced by a photo and story on Kentucky.com. Laurie Brock is doing Lent Madness in style here on www.lentmadness.org, and also in her parish, St. Michael the Archangel, Lexington, KY.

We've been mentioned on a bunch of blogs, including RevRuth's Rantings, Building Faith, Fr. Jonathan's Blog, and Word and Table. In case you were wondering if we are really important, we've been labeled as an official Vital Practice. There are lots of others, so if we missed you, please leave a comment to alert our readers. We'll do another round of shout-outs in a bit.

Last, but not least, we've received what we consider to be a celebrity endorsement. Barbara Crafton has gone on record about Lent Madness, saying, and we quote, "You guys are wacko."

9 comments on “Purple Buzz on the Interwebs”