One week until Ash Thursday 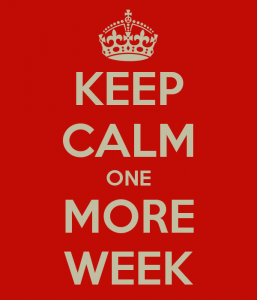 Throughout the world, people are wondering how they will manage to wait until Ash Thursday. Just one week from today, Lent Madness 2013 kicks off on February 14, 2013. In an effort to serve our global audience, the Supreme Executive Committee hereby shares the Top 10 Ways to Pass the Longest Week of the Year.

10. Get your bracket for Lent Madness 2013. Print it out. Start picking your saints.
9. You'll need to do some research to succeed at number 10. Besides Wikipedia, there are some great resources listed on this site. Naturally, we especially recommend The Calendar of Saints: Lent Madness 2013 Ultra-Revised Edition.
8. Go on a worldwide Lent Madness pilgrimage. Build an itinerary with St. Louis, St. Bart's, San Francisco and other saint cities and/or islands.
7. Sip coffee from your official Lent Madness 2013 coffee mug. Just please do not put lousy coffee in it. Life is too short, and the mug is too great.
6. Plan to take part in Brackets to Go this year on Shrove Tuesday. It's important to take the brackets to the people, rather than expecting people to come to the brackets. Print out some brackets and hand them out at train stations or street corners.
5. Watch the entire corpus of Monday Madness episodes again. If possible, get the director's cut on Blu-Ray. Make sure you learn our new theme music so you can hum it constantly.
4. As you know, the SEC does not condone gambling. However, we do encourage fund-raising for charity. Start up a betting pool, and give the proceeds to a great cause such as Episcopal Relief & Development.
3. Plan to hijack the pulpit at your church on Sunday. Get everyone rallied up. Suggest various places where brackets could be placed (the front of the altar, on the back of the celebrant's chasuble, or projected onto giant screens).
2. Connect with other Lent Madness fans by liking our page on Facebook, following us on Twitter, or getting Pinterested in our other social media.
1. Tell your friends about the good news of Lent Madness. Why keep the joy to yourself?

Before you know it, it will be time to cast the first votes in Lent Madness 2013. Who will win the Golden Halo? No one knows, but it will be a grand competition. Expect laughter, learning, inspiration, and no small amount of snark.

12 comments on “One week until Ash Thursday”