A day after the election of a new pope, the only pope in the bracket, Gregory the Great, digs in his (red, Prada-covered) heels against Florence Li-Tim Oi, the first female priest in the Anglican Communion. To make it to the Saintly Sixteen, Gregory defeated Martin of Tours and Florence bested, nay demolished, Chad of Lichfield in our most lopsided match to date. Today's winner earns a date with Oscar Romero in the next round.

While the heated battle was going on, Tim spoke about the world's most popular online Lenten devotion, on Boston Public Radio. You can listen to the live interview (well, live at the time) by clicking here (skip to 1:35:15).

And thanks to everyone who liked us on Facebook this week, propelling us over our goal of 5,000. We're not sure what the next goal will be. Perhaps 1,500 followers on Twitter? (we're currently at 1,250). Certainly, we can do better than Scott's 2,231 Twitter followers/disciples... 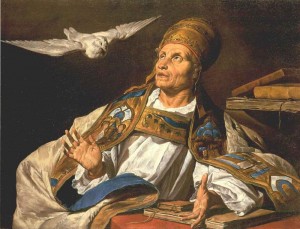 A liturgical reformer and staunch advocate for the poor, Gregory the Great, pope from 590 until his death in 604, skillfully navigated the complex era poised between the ancient and the medieval world. Drawn from his love for the quiet, monastic life to be pope, he served the church and the people of Rome faithfully.

In modern times, Gregory is well-known as the man who done Mary Magdalene wrong. In a sermon from 591 his facile conflation of several women cited in the Gospels into the person of Mary Magdalene is now judged a breathtaking oversimplification. His point -- to prove that even a person deeply mired in sin could be redeemed by the work of Christ -- is mostly lost within the controversy. He said, “In paradise, a woman was the cause of death for a man; coming from the sepulcher, a woman proclaimed life to men."

Now, despite 1,400 years of being maligned, Mary Magdalene seems to have had the last laugh. She has universal recognition while we don’t even know poor Gregory’s last name. And, some might remember, she fared pretty well in Lent Madness 2012.

But this isn’t something about Mary.

It’s about Gregory the Great, who once said, "Whatsoever one would understand what he hears must hasten to put into practice what he has heard." And, even more apropos to our purposes here, "The universe is not rich enough to buy the vote of an honest man."

When not busy liturgically innovating or fiddling with plainchant, he had some lovely things to say about love. In a letter to Virgillius, Bishop of Arles, he wrote:

O how good is charity, which through an image in the mind exhibits what is absent as present to ourselves, through love unites what is divided, settles what is confused, associates things that are unequal, completes things that are imperfect! Rightly does the excellent preacher call it the bond of perfectness; since, though the other virtues indeed produce perfectness, yet still charity binds them together so that they can no longer be loosened from the heart of one who loves.

And this: “The proof of love is in the works. Where love exists, it works great things. But when it ceases to act, it ceases to exist.

But what about the dove?

The Catholic Encyclopedia attributes a story to Gregory’s friend, Peter the Deacon:

[W]hen the pope was dictating his homilies on Ezechiel a veil was drawn between his secretary and himself. As, however, the pope remained silent for long periods at a time, the servant made a hole in the curtain and, looking through, beheld a dove seated upon Gregory's head with its beak between his lips. When the dove withdrew its beak the holy pontiff spoke and the secretary took down his words; but when he became silent the servant again applied his eye to the hole and saw the dove had replaced its beak between his lips.

In a preface to Gregory’s influential “The Book of Pastoral Rule,” Philip Schaff, offers insight to his gifts and foibles,

Remarkable indeed is his own discriminating insight, displayed throughout, into human characters and motives, and his perception of the temptations to which circumstances or temperament render various people—pastors as well as members of their flocks—peculiarly liable. No less striking, in this as in other works of his, is his intimate acquaintance with the whole of Holy Scripture. He knew it indeed through the Latin version only; his critical knowledge is frequently at fault; and far-fetched mystical interpretations, such as he delighted in, abound. But as a true expounder of its general moral and religious teaching he well deserves his name as one of the great Doctors of the Church. 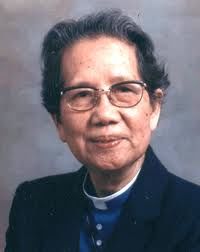 Florence Li Tim-Oi, first female priest in the Anglican Communion, pursued a theological degree in Guangzhou during the Sino-Japanese War. In between exams, she also headed up the rescue squad, searching for survivors each time her town was bombed. Her memoir details the horrors she viewed: the girl crushed beneath rubble, the woman with bound feet who couldn’t flee, the man blown apart. This turned Florence into a permanent lover of peace.

Later in the war, while she was serving her parish in Macau, she received word that her father was ill and destitute in Hong Kong. So she disguised herself as a maid, borrowed some money, procured a boat, and braved the Japanese blockade to rescue him. Along the way, they ran into pirates. Florence described what happened:

The fisherman ordered all of us to throw the fishnet overboard and pretend we were trying to pull the net in. All the passengers co-operated. Knowing that I was a missionary, they jointly urged me to get below deck and pray. I gladly obeyed and knelt down in sincere intercession, imploring God to show his mercy...and grant us peace which passes understanding...Thinking that we were merely poor fishermen with no profitable booty, the bandits turned and sailed away.

She got her father out safely, but discovered later that the other boats that had left with them had all been captured.

When Florence first found out about the controversy over her ordination, she writes of her reaction, “I was quite perturbed. I gave serious thought to whether I should step down or stay on. Through a moment of deep meditation in which I prayed for God’s guidance, and the constant working of the Holy Spirit, I suddenly saw the light....I was willing to give up my title as priest, but I knew that having been ordained, I had to follow the order throughout my whole life. This is my philosophy of life. No one can take away the peace that comes from completing one’s responsibility to history and fulfilling God’s will.”

Much later, she had the opportunity to visit with then-Archbishop of Canterbury Robert Runcie. This was before the ordination of female priests in the Church of England, and Runcie was on the fence. But after talking with Florence, he commented to the archbishop of Canada, “Who am I to say whom God can or cannot call?”

Florence herself was unabashed in this opinion as well: “Let me say that it is only proper for us, not to discriminate between sexes, but with one heart and one mind bear witness to Christ...If we stand steadfast in our faith, and both male and female cooperate in bringing heaven on earth, decisive victory is certain through the power of the Holy Spirit. Besides, is not our God an omnipotent God, and our help in ages past?”

108 comments on “Gregory the Great vs. Florence Li-Tim Oi”