Welcome to the Round of the Saintly Sixteen! After 16 bruising battles, we have cut the field from 32 saints to 16. We’ve already seen our fair share of hotly contested match-ups, blow-outs, and Cinderellas and we’re only half-way through the bracket. Lent Madness, like Lent, is part endurance race and we encourage those who have come thus far to buckle down for the duration. As Saint Paul (who was upset by Emma of Hawaii last year) says, “Run with perseverance the race that is set before you.”

In this round, we move past basic biographies and delve into what we like to call “Quirks and Quotes.” We’ll learn some unusual facts about our saints and hear about them, either in their own words or in words uttered or written about them. Some of our holy men and women are quirkier than others and some are more quotable. As always, remember these match-ups are neither fair nor for the faint of heart. If you want a bland Lenten devotion you’ve come to the wrong place. 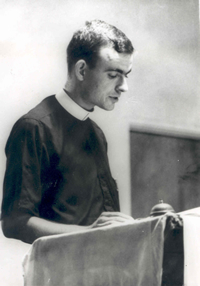 “I had come to Evening Prayer as usual that evening, and as usual I was singing the Magnificat with the special love and reverence I have always had for Mary’s glad song. ‘He hath showed strength with his arm…’ As the lovely hymn of the God-bearer continued, I found myself peculiarly alert, suddenly straining toward the decisive, luminous, Spirit-filled ‘moment’ that would, in retrospect, remind me of others – particularly of one at Easter three years ago. Then it came. ‘He hath put down the mighty from their seat, and hath exalted the humble and meek. He hath filled the hungry with good things…’ I knew then that I must go to Selma.” 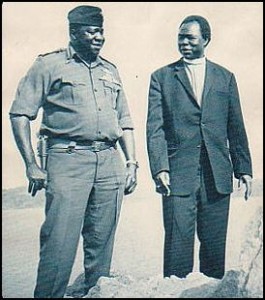 Quote from the day he embraced Christianity:
“Today I have become a leader in Christ’s army. I am prepared to die in the army of Jesus. As Jesus shed his blood for the people, if it is God’s will, I do the same.”

Quote about that conversion:
“When I was converted, after realizing that my sins were forgiven and the implications of Jesus’ death and resurrection, I was overwhelmed by a sense of joy and peace.…The reality of Jesus overwhelmed me – and it still does.”

Quote explaining why his participation in those centennial celebrations would be limited:
“I do not want to be the Archbishop of a dead church, but of a live one.”

Quote in response to criticism of his willingness to meet repeatedly with Idi Amin:
“I do not know for how long I shall be occupying this chair. I live as though there will be no tomorrow. I face daily being picked up by the soldiers. While the opportunity is there, I preach the gospel with all my might, and my conscience is clear before God that I have not sided with the present government, which is utterly self-seeking. I have been threatened many times. Whenever I have the opportunity I have told the President the things the churches disapprove of. God is my witness.”

Quote whispered to fellow Anglican bishop Festo Kivengere as Archbishop Luwum, like Jesus, was mocked by the soldiers of a dictator before he was executed:
“They are going to kill me. I am not afraid.”

Quote spoken to a young lawyer named John Sentamu, who decided to become a priest on the day that Archbishop Luwum was martyred and who now serves as the Archbishop of York:
“We must be Christ to these people: be our advocate and take up their cases. The local prison is filled to capacity with innocent people suspected of opposing the government.”