Luke the Evangelist vs. John Donne

Today's match-up pits two writers against one another. Evangelist vs. Poet. In other words if you've ever experienced the agony of writer's block, this battle's for you.

No one seemed to experience voter's block yesterday as Hilda of Whitby held off a feisty Ignatius of Antioch to advance to the Elate Eight. She'll face the winner of Martha of Bethany vs. Harriet Tubman (good luck with that).

While everyone knows we have the best Celebrity Bloggers in the Celebrity Blogger business, we need to say a word about our own Laurie Brock. Some of you may know that a few days ago Laurie took a spill off her galloping horse and fell onto a fence. While she's at home and recovering nicely, she did break several ribs and punctured a lung. We invite you, the Lent Madness community, to keep Laurie in your prayers in the weeks ahead. An out-of-commission priest less than three weeks before Easter is not a good thing.

While the SEC got off its duff and wrote yesterday's write-up for Hilda (one of Laurie's saints), Laurie insisted on writing today's entry for John Donne. In other words, she is so dedicated to Lent Madness that she overcame broken bones and internal injuries to fulfill her commitment. While most of us would be crying while curled up in the fetal position and cursing the world (speaking for myself), Laurie has gotten right back in the Lent Madness saddle (um, bad analogy). Of course, this shouldn't affect your voting choice since the last thing Laurie would want would be sympathy votes for John Donne.

Tim and Scott addressed Laurie's situation and the inherent hazards of Celebrity Bloggership in yesterday's edition of Monday Madness along with a response to the accusation that Lent Madness is a liberal religious gambling site. Monday Madness: It's must see (low production value internet) TV!

And finally, if you haven't liked Lent Madness on Facebook (and reaped the benefits of all the bonus material) this is the week to do so. We're on a campaign to hit 5,000 likes by the end of the week. Why? Because we like round numbers and Tim and Scott could use the affirmation as a measure of their self-worth. Thanks to all our new "likers" who heeded the call yesterday -- well over 150 of you -- to put us at 4,859 as of this very moment. 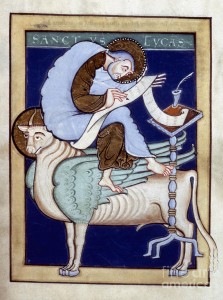 Luke the Evangelist and author of Luke-Acts gave us many key stories of the New Testament, including stories of Jesus’ birth and the arrival of the Holy Spirit on the day of Pentecost. But the stories about Luke himself are thin on the ground. What is he hiding? He’s the patron saint of bachelors and brewers, which is suggestive. Was he part of a fraternity? He was a Greek after all.

He’s also the patron saint of painters, based on a legend that he painted an official portrait of the Madonna. Dante Gabriel Rossetti wrote a sonnet about “St. Luke the Painter” that begins:

Give honor unto Luke Evangelist
For he it was (the aged legends say)
Who first taught Art to fold her hands and pray.

It is claimed that both the Black Madonna of Czestochowa and the Madonna Nikopeia were painted by Luke with the Madonna sitting as model, telling him stories of Jesus’ life and ministry.

Luke is often seen with his emblem of an ox, which either symbolizes the priestly aspect of his gospel (since it begins with the priest Zechariah) or the sacrificial nature of Jesus’ ministry. Or someone decided to make the four beasts surrounding God’s throne in Ezekiel 1 match the four gospels of the New Testament canon and Luke got the ox.

There is another story about Luke in the Golden Legend of Jacobus de Voragine (compiled in the 13th-Century) that claims Luke appeared to the Christians of Antioch who “had abandoned themselves to vice,” and were “besieged by a horde of the Turks.” Luckily, with Luke’s intercession, “the Christians straightaway put the Turks to rout.” And no doubt straightened up their act.

So apparently Luke kept an eye on his hometown of Antioch, which was probably tricky since he’s a bit scattered. In 357, his remains were moved to Constantinople by Constantine, then later taken to Padua, having been stolen by Crusaders. In 1992, the Greek Orthodox Metropolitan Ieronymos of Thebes and Levathia requested a bit of Luke and received “the rib of Luke that was closest to his heart,” which is now buried in Thebes. His head somehow ended up in Prague at some point, apparently. Other competing relics include three arms, a knee, two fingers, a tooth, and some miscellaneous bones.

A DNA test of a tooth from the Padua relics, however, suggest the remains are indeed “characteristic of people living near the region of Antioch, on the eastern Mediterranean, where Luke is said to have been born. Radiocarbon dating of the tooth indicates that it belonged to someone who died between 72 A.D. and 416 A.D.” So you know that’s legit.

John Donne’s life preached the truth that humans are complex, rich texts. Like the stories in our Holy Scripture, one cannot read the section of Donne’s later ordained life as Dean of St. Paul’s Cathedral in 17th-century England without reading the first chapters of his adventures as a rake and scoundrel. Donne was born into a prominent Roman Catholic family and attended several institutions of higher learning, never attaining a degree. Instead, he jumped ship to the European continent, wrote bawdy poetry, womanized, partied, and lived life out loud while writing even more poetry. After going legit (sort of -- he was still one of London’s official playboys), his wit and intelligence landed him a job as the private secretary to one of the highest officials in the queen’s court. He secured a seat in Elizabeth’s last parliament and was on the fast track to fame and fortune. Then he ruined it all for love. He secretly married Ann More and her father and John’s employer were totally opposed to the match. Yet they married. Donne got sacked and landed in jail, along with the priest who married them. Donne summed up the experience in one sentence:  “John Donne, Ann Donne, Undone.”

His friends began to urge him to consider holy orders. He resisted, noting that some in England considered him a pornographer and that, “some irregularities of my life have been so visible to some men.” King James, however, wanted him to become a priest, and the king’s will was done.  Donne was ordained and soon became known as a great preacher in a era of great preachers.

Many of Donne’s poems, essays, and sermons during this time reflect a fixation on death (many being code for most). During his 10-year tenure as Dean of St. Paul’s the Black Plague swept through London thrice (this is about Donne; I can use thrice). His beloved wife Ann died before he became Dean and 5 of his 12 children died in childhood. He had a painting done of himself in a death shroud before he died. Yet his words focus not on the hopelessness of death, but the embrace of God’s love that awaits us through the gates of death.

Death, be not proud, though some have called thee
Mighty and dreadful, for thou art not so;
For those whom thou think’st thou dost overthrow
Die not, poor Death, nor yet canst thou kill me....
One short sleep past, we wake eternally
And death shall be no more; Death, thou shalt die.

Donne’s life -- all of it -- preached. His sermons, his poetry, his satire, and his essays weave the fullness of human life together. Courageously he did not edit out the distasteful, racy parts, but allowed all the words he lived and wrote to be offered to the glory of God. Donne’s life was filled with love, loss, passion, mistakes, poverty, riches and redemption. No chapter was wasted or ignored by Donne or God.  For Donne, “[A]ll mankind is of one author and is one volume; when one man dies, one chapter is not torn out of the book, but translated into a better language; and every chapter must be so translated. God employs several translators; some pieces are translated by age, some by sickness, some by war, some by justice; but God’s hand is in every translation, and his hand shall bind up all our scattered leaves again for that library where every book shall lie open to one another.”

116 comments on “Luke the Evangelist vs. John Donne”