Therese of Lisieux vs. Martha of Bethany

In the penultimate match-up of the First Round, two women square off with the winner taking on Harriet Tubman. Thérèse of Lisieux, the original flower child, takes on Martha of Bethany, Biblical disciple. Yesterday Gregory the Great defeated Martin of Tours in the Battle of the Bishops and will face Florence Li-Tim Oi in the next Round. We understand that, in an act of deferential concession, Martin then sliced his miter in half.

If you missed yesterday's release of the People's Edition of Monday Madness make sure you watch it today. Tim and Scott aren't in it -- we defer to the "little people" of Lent Madness. AKA some people who were with us in San Diego last week that were duped into finishing the statement "I love Lent Madness because..." 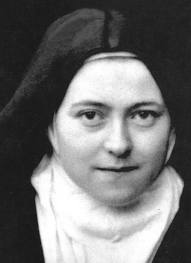 While experiencing nervous tremors as a young girl, Thérèse of Lisieux (1873-1897) believed that she saw a vision of the Virgin Mary and was healed. She described this to Carmelite nuns, whose questions filled her with self-doubt and caused her to believe, wrongly, that she had lied about it. Several years later, on Christmas Eve 1886, she had what she said was a “complete conversion” as love entered her heart and liberated her to serve others.

The next year she told her father about her desire to mark the first anniversary of that conversion by joining the Carmelite nuns before Christmas. He picked up a little white flower with its roots and gave it to her. He said that God had created it and cared for it. Thérèse, who would eventually become known as “The Little Flower,” believed that to be a metaphor for her own life and that she would be planted in different soil. Yet she was still considered too young to be planted in the soil of the Carmelite nuns.

Later that same year, on a pilgrimage to Rome, she knelt before Pope Leo XIII and asked him to allow her to enter that religious community. He blessed her but left the decision in the hands of its superiors. She stubbornly remained there and had to be removed from the room by the Swiss Guard. Finally, however, she was allowed to become a Carmelite postulant at the age of 15 and moved into a cloistered community in Lisieux, which is located in northwestern France. Thérèse made her religious profession there at the age of 17.

She finally had the life she wanted – a life dedicated to prayer. So it’s interesting to note that she frequently fell asleep while praying and was embarrassed that she couldn’t stay awake in chapel with her religious community. But she realized that parents love their children while they sleep just as much as they do when they’re awake. In the same way, she knew that God loved her.

Chapel presented other challenges too. One of the nuns made clicking noises in that setting that drove Thérèse nuts. She might have been playing with her rosary. She might have had bad dentures. Whatever the true cause, it was simply maddening to Thérèse. But Thérèse decided to make it into a kind of music and offer it as a prayer as she sat there in the presence of God.

Those are both examples of her “little way” of being a Christian. After Thérèse’s death from tuberculosis at the age of 24, her writings were collected and published as The Story of a Soul. That’s how the world came to know and love her.

Collect for Thérèse of Lisieux
O God, by whose grace Thérèse of Lisieux became, with the fire of your love, a burning and a shining light in your Church: Grant that we may be inflamed with the same spirit of love, and ever walk before you as children of light; through Jesus Christ our Lord. Amen. 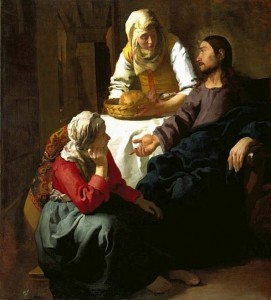 Though Martha of Bethany is mentioned in only two places in Scripture (Luke 10:38-42, John 11-12), she has had a lasting impact, for good and ill, on our conception of the spiritual life. It is sometimes hard to remember that Martha is a person and not a type. But, as one commentator puts it, “She looks at us out of the pages, a curiously vivid personality; downright, honest, practical, unselfish” (Interpreter’s Bible 1952, Volume 8, p. 636).

Martha is a devoted sister, never mentioned except alongside one or both of her siblings, Mary and Lazarus. Whether Martha is the oldest in the family is uncertain.  However, Luke makes it plain that Martha invites Jesus to her house for that fateful meal when Jesus takes her multitasking to task. “Tell my sister to come and help me,” Martha says. In reply, Jesus speaks to Martha’s inner state rather than the presenting issue: “you are worried and distracted by many things; there is need of only one thing.” Martha, who had sought to serve Jesus and wishes for Mary to do the same, is instead invited to be served.

John reports that when Jesus arrives at Bethany after the death of Lazarus, it is Martha who first goes out to greet him. They engage in a conversation in which Martha’s statement of Christ’s ministry rivals the Confession of Peter.

Jesus said to her, "Your brother will rise again." Martha said to him, "I know that he will rise again in the resurrection on the last day." Jesus said to her, "I am the resurrection and the life. Those who believe in me, even though they die, will live, and everyone who lives and believes in me will never die. Do you believe this?" She said to him, "Yes, Lord, I believe that you are the Messiah, the Son of God, the one coming into the world" (John 11:23-27).

Also like Peter, Martha has a habit of saying exactly what she’s thinking and keeping it real. As with Peter, Jesus treats this forthrightness with forthrightness. When Jesus tells those gathered to remove the stone from Lazarus’ tomb, it is Martha who points out Lazarus has been dead four days and smells pretty ripe. This earns her another ding from Jesus who says, “Did I not tell you that if you believed, you would see the glory of God?”

Martha seems to take these rebukes in stride, continuing in her faithful discipleship and love of her Lord. In the final mention of Martha in Scripture, John 12:2, Jesus again joins the beloved siblings for dinner. Lazarus is at table; Mary anoints Jesus’ feet with perfume. And Martha served.

Collect for Martha of Bethany
Generous God, whose Son Jesus Christ enjoyed the friendship and hospitality of Mary, Martha and Lazarus of Bethany: Open our hearts to love you, our ears to hear you, and our hands to welcome and serve you in others, through Jesus Christ our risen Lord; who with you and the Holy Spirit lives and reigns, one God, for ever and ever. Amen.

Therese of Lisieux vs. Martha of Bethany

162 comments on “Therese of Lisieux vs. Martha of Bethany”