As we are out of season -- that is, out of the Lenten season -- the Supreme Executive Committee will be releasing monthly videos instead of weekly videos. So stay tuned to the Lent Madness Video Channel for Monthly Madness.

This month's episode is a review of the recent Spring Retreat of the Supreme Executive Committee. As you know, the SEC meets in a highly secure location to discern the bracket for Lent Madness. Believe us, an excellent bracket is about to be released to the world. This video will give you a preview. Or will it? Watch it all to find out.

The bracket for Lent Madness 2014 will be announced soon. If you are hoping to see Mr. Rogers among the elect, don't hold your breath. 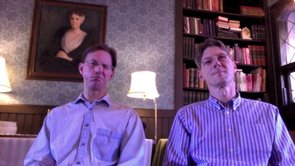 This is here for social media sharing, or in case you want to print out a screen capture to post on your refrigerator at home. We know you love to have souvenirs of Lent Madness videos, such as printouts on your fridge. For a modestly exorbitant fee, the SEC will come autograph your fridge (as long as it's purple).