Basil the Great vs. Antony of Egypt

Welcome to the Round of the Saintly Sixteen! After sixteen bruising, gut-wrenching, heart-pounding battles, we have cut the field of 32 saints in half. We’ve already seen our fair share of hotly contested match-ups, blow-outs, and Cinderellas and we’re only half-way through the bracket. Lent Madness, like Lent, is part endurance race and we encourage those who have come thus far -- both voters and contestants -- to buckle down for the duration and, in the words of Saint Paul, “Run with perseverance the race that is set before you.”

In this round, we move past basic biographies and delve into what we like to call “Quirks and Quotes.” We’ll learn some unusual facts about our saints and hear about them, either in their own words or in words uttered or written about them. Some of our holy men and women are quirkier than others and some are more quotable. As always, remember these match-ups are neither fair nor for the faint of heart. If you want a bland Lenten devotion you’ve come to the wrong place.

Yesterday's Round of 32 ended with the biggest rout of 2014 with Charles Wesley throttling his brother John 80% to 20%. As you make your informed and never irrational choices from here on out, you can always refresh your memory with the first round bios conveniently housed under the bracket tab by Bracket Czar Adam Thomas. Just click the appropriate links for the first round match-ups. Adam has also updated the Match-Up Calendar so you can see precisely when all the Saintly Sixteen action will take place. Print it out and staple it to your refrigerator!

We kick thing off with Basil the Great vs. Antony of Egypt. In the last round Basil defeated Christina the Astonishing while Antony turned back Mary of Egypt. Away we go! 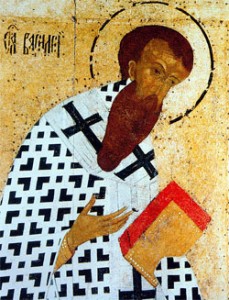 Basil (330-379) was a prolific writer and preacher. His numerous writings included a treatise on the Holy Spirit; a Lenten series on Creation; writings on the Psalter; sermons on living the Christian life; liturgies and prayers; and hundreds of letters. Essentially, he was a one-man Forward Movement Tract* Rack. A few selections include:

Prayer is a request for what is good, offered by the devout of God. But we do not restrict this request simply to what is stated in words. We should not express our prayer merely in syllables, but also through the attitude of our soul and in the virtuous actions we do in our life. This is how you pray continually — not by offering prayer in words, but by joining yourself to God through your whole way of life, so that your life becomes one continuous and uninterrupted prayer.

When you sit down to eat, pray. When you eat bread, do so thanking God for being so generous to you. If you drink wine (or coffee), be mindful of God who has given it to you for your pleasure and as a relief in sickness. When you dress, thank God for His kindness in providing you with clothes. When you look at the sky and the beauty of the stars, throw yourself at God’s feet and adore Him who ordered things this way. When the sun goes down and when it rises, when you are asleep or awake, give thanks to God, who created and arranged all things for your benefit, to have you know, love and praise their Creator.

On Attachment to Possessions

Basil lived what he preached. He ate a bare minimum of food, just enough to survive. He owned only the clothes on his back and used any money he acquired to help the poor and needy.

Lest anyone think Basil was all sweetness and light, he challenged an entire faction of the Church, including an emperor. When the Emperor's prefect demanded Basil support the Arian heresy or risk torture, exile, and death, Basil’s response was essentially, “Hit me with your best shot,” although much more eloquent. When the prefect, stunned by Basil’s defiance, said he’d never heard a bishop speak like that to him, Basil simply replied, “Perhaps you’ve never met a real bishop before.”

And forever inspire the Church.

*Tracts are small pamphlets that offer insight and information about all things Episcopal. The quotes are not verbatim, either. 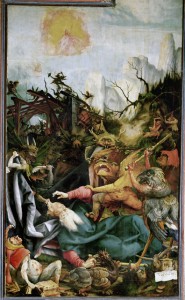 In our first encounter with Antony we saw him sell all of his inheritance, ensure the safety of his younger sister (who later became a “guiding spirit” to other virgins), move out to the desert, wage intense battle with demons, and staunchly defend orthodoxy before his death as an old man.

St. Antony’s biographer, the bishop Athanasius, tells us that when Antony addressed would be monks, he reminded them that “The whole of [a person’s] life is very short measured by the ages to come, so that all our time is as nothing compared to eternal life.” Antony himself lived by this code. It was not enough to give up all he owned, he had to be a “martyr to his conscience” daily (Martin Luther would be proud). To aid in this “[Antony] fasted continually, his clothing was hair on the inside while the outside was skin” and “he never bathed his body in water to remove filth.”

In the Sayings of the Fathers it is reported that a man wished to become a monk. After selling all his possessions but keeping some of the proceeds for himself, he came to Antony. Antony instructed him to go to the local village, buy meat, and attach it to his bare body. The man did so and was hounded by birds and wild animals the entire walk back, his body in tatters from the beasts. Antony looked at him and declared, “Those who have renounced the world but wish to have money are thus attacked and massacred by the demons.”

Speaking of demons, Antony’s many nights in the tombs resisting devils produced a demonology that puts Frank Peretti to shame. Space only allows a brief mention of his battle with an enormously tall demon named Providence. Although demons appear full of confusion, crashing, roaring, and shouting, all Antony had to do to banish his foe was blow a breath at it, speak the name of Christ, and make an effort to strike it. The enemy, along with his fellow demons, vanished in a jiffy.

Antony also had a way with animals. Once when he had planted a garden, wild animals continued to damage the beds. With tact that would make Francis of Assisi jealous, Antony gently caught one of the animals and announced to the other beasts, “Why do you do harm to me when I harm none of you? Go away, and in the Lord’s name do not come near these things again!” He was never bothered by the vermin again. Not even a ferret.

Antony firmly believed in the inherent goodness of human beings. He reminds us, “When you hear the word virtue mentioned, do not be afraid of it or treat it as a foreign word. Really it is not far from us, nor is its home apart from us; no the thing is within us, and its accomplishment is easy if we but have the will.”

Finally, I leave you with the little known fact about Antony’s diet. It is reported by his biographer Davidicus that, in addition to his simple meals of bread and water, he used to eat basil for breakfast.

Basil the Great vs. Antony of Egypt

130 comments on “Basil the Great vs. Antony of Egypt”