Today’s battle between musician and king is one of the more intriguing pairings of Lent Madness 2014. While on seemingly disparate paths, both J.S. Bach and Alfred the Great were fighters. Well, Bach once tangled with a bassoonist and Alfred fought Vikings but you get the point. However this match-up turns out, we know Bach will remain victorious in one category: children sired. He famously fathered 20 children while Alfred had a mere quarter of this number.

In yesterday’s neck-and-neck race between James Holly and Harriet Beecher Stowe, Harriet eked out a victory 51% to 49%. She’ll go on to face Alcuin of York in the Round of the Saintly Sixteen.

In the same way it’s never too late in Lent to begin a Lenten discipline, it’s never too late to join in Lent Madness! If you’re just checking out this fun, informative way to learn about some amazing people and grow your faith, click here to watch our brief Voting 101 video. We also have some general information for those new to Lent Madness here.

If you haven’t liked us on Facebook or followed us on Twitter, you’re missing some supplemental conversation. Granted there’s plenty of that among the hundreds of comments that follow each match-up but some people just can’t get enough of the Madness!

Well, it’s been a wonderful, wacky, heart-pounding first full week of Lent Madness 2014. Yesterday marked our second 1% margin of victory this week (see Antony of Egypt vs. Mary of Egypt). Yowza! The Supreme Executive Committee authorizes you to take a deep cleansing breath this weekend and then get ready for our next match-up on Monday morning as Lydia tangles with Moses the Black. 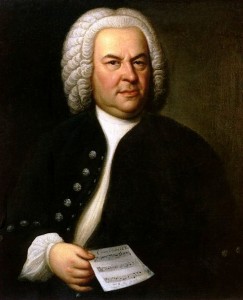 For someone who was orphaned at age nine and never traveled farther than 225 miles from his birthplace, Johann Sebastian Bach left a legacy to the world of music much grander than his circumstances might suggest. Born in 1685, the eighth child of a musical family in Eisenach, Germany, Bach studied organ and voice. He was known for his stellar soprano voice. After the loss of his parents who died just months apart, he lived with his older brother, Johann Christoph, an organist who likely continued Bach’s training and introduced him to contemporary music.

Bach’s first real job as an organist came at the age of eighteen when he was hired in Arnstadt, a city in central Germany. Over the next several years, as he moved to progressively larger and more prestigious positions, he began composing in earnest. At age 22 he married his first wife, Maria Barbara, and rather famously, engaged in a street fight with a bassoonist.

After stints in Weimar and Köthen as Kapellmeister (musicmaker), Bach landed in Leipzig in 1723 as Thomaskantor, or director of music, a post he held for twenty-seven years until his death. During this period, he composed more than 300 sacred cantatas that correspond to the weekly lectionary readings. In addition, he continued composing the large-scale orchestral works for which he is well known: the St. Matthew Passion and St. John Passion for Good Friday, the Mass in B Minor, the Brandenburg Concerti, and hundreds of other works. A catalog of his work created in 1950 lists some 1,127 surviving pieces; many more compositions were lost over the years.

In Bach’s day, the church was the only place an accomplished musician could make a living for himself and his family. And Bach required a substantial living: between his two wives (the second was the much-younger, highly gifted soprano Anna Magdalena) he fathered twenty children, ten of whom survived to adulthood. However, his deep devotion to the Christian faith was evident: he not only composed the sacred works but also taught Luther’s Small Catechism classes while at Leipzig. No one of his stature would have been forced to teach Sunday School.

J.S. Bach died at age 65 in Leipzig. He kept composing until the very end, despite contending with blindness for many years. His deep dedication to his craft resulted in some of the most beautifully complex music humankind has ever created. Certain of Bach’s pieces are the musical equivalent of a gothic cathedral. They make our hearts soar toward God.

Collect for J.S. Bach
Almighty God, beautiful in majesty and majestic in holiness, who teaches us in Holy Scripture to sing your praises and who gave your musicians Johann Sebastian Bach, George Frederick Handel and Henry Purcell grace to show forth your glory in their music: Be with all those who write or make music for your people, that we on earth may glimpse your beauty and know the inexhaustible riches of your new creation in Jesus Christ our Savior; who lives and reigns with you and the Holy Spirit, one God, for ever and ever. Amen.

Alfred the Great united the kingdom of England and was its first great moral leader. Born around 849, he was sent to Rome at the age of four, where some sources say he was confirmed and anointed king by Pope Leo IV.

This was a trifle premature, since Alfred had three older brothers, one of whom deposed his father shortly after they returned home to England. Until Alfred came of age, the kingdom was divided between his brothers, Aethelbald, Aethelred, and Aethelbert.

During this period, Alfred fought alongside his brother, Aethelred; first, against the “Great Heathen Army,” led by Ivar the Boneless, then against the invading Danish—also known as the Viking—army. This second battle did not go well, at least for Aethelred. He died, and Alfred became the new king in 871.

This was less impressive than it sounds. The Vikings had conquered most of England, but by 880, Alfred had managed to push them back out, and for the first time in history, unite England under a single ruler.

Alfred then set about reforming legal practices throughout the land. He issued a new legal code to standardize the laws throughout all England. This was called the Doom Book, which took inspiration from the Ten Commandments and the gospel’s call for mercy and combined them into a comprehensive system that meted out fines and payments instead of violence.

Alfred also saw it as his job to increase education and religious piety. So he began a court school to improve his own children’s learning as well as issued a decree that all primary education occur in English. To aid this cause, he commissioned the translation of numerous books into English, including the Venerable Bede’s Ecclesiastical History and the Dialogues of Gregory the Great. Alfred also translated several books into English himself, including the first fifty Psalms and Boethius’ Consolation of Philosophy.

Alfred believed it was his duty to care for both the physical and spiritual well-being of his people, and tried, throughout his reign, to do both equally. He died in October of 899. He is the only English monarch to be (officially) called “the Great.”

Collect for Alfred the Great
O Sovereign Lord, who brought your servant Alfred to a troubled throne that he might establish peace in a ravaged land and revive learning and the arts among the people: Awake in us also a keen desire to increase our understanding while we are in this world, and an eager longing to reach that endless life where all will be made clear; through Jesus Christ our Lord, who lives and reigns with you and the Holy Spirit, one God, for ever and ever. Amen.

J.S. Bach vs. Alfred the Great