Will the people of St. Louis, Missouri, rise up to support their namesake or will the alumni of Gallaudet University emerge in force? Will the people of France cry "Mon Dieu!" and vote for Louis or will the Deaf community throughout the world come together in support of Thomas? These questions, and probably more, will be answered in today's edition of "As the Steeple Turns."

In yesterday's Battle of the Catherines, Catherine of Siena solidly defeated Catherine of Alexandria 61% to 39%. No word on how Catherine Zeta-Jones, Kate Middleton (aka the Duchess of Cambridge), Katy Perry, Katie Couric, or Katharine Jefferts Schori voted. 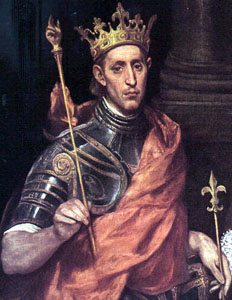 Though other monarchs have been named saints, Louis IX of France is the only French sovereign on the Roman Catholic Church’s divine rolls. Louis IX acceded to the throne when he was just twelve years old. Although he was known for his fiery youthful temper, he was widely viewed as an able commander and generous ruler. He endowed monasteries, abbeys, and cathedrals from the earliest years of his reign. Most spectacular is the Sainte-Chapelle (Holy Chapel) in Paris, which housed numerous relics including the Crown of Thorns and relics of the True Cross.

Throughout his reign, Louis was well regarded for his impartiality, even-handedness, and willingness to negotiate rather than go to war. He worked tirelessly to find a fair peace with Henry III of England, though he could have insisted on punitive demands. Instead, he allowed the King of England to retain not only substantial claims to land but also his dignity. In return, the English monarch named himself a vassal of Louis, pledging mutual military support and protection. An able negotiator and trusted arbitrator, Louis was often asked to navigate difficult diplomatic situations between parties across Europe (and was even called upon to make peace between Henry III and his English barons). Louis became known as the ideal of Christian Princedom.

He changed laws to limit corruption and increase transparency. Trial by combat, judicial duels, usury, and more were done away with as Louis sought to create a more humane and responsible system of governance. Had popular voting in brackets been invented in the thirteenth century, we are pretty sure Louis would have supported this particular mode of governance and competition. Louis is not without flaws, though, and was not given to unleavened piety. He struggled with gluttony and always worked to maintain his temper. (He was often most exercised by the abuses of clergy, which he punished with some ferocity.)

Perhaps the most damaging parts of Louis’s legacy are his leadership of the failed crusade in Tunisia, which would prove to be his mortal end. In addition, at the urging of the Holy See, he burned thousands of copies of Jewish texts (this campaign against the Jews was overturned by the succeeding Pope).

At his death in 1270, Louis demonstrated his deep care for his people. He commanded his son to protect and assist the poor, who were the humblest of his subjects. Louis IX was popularly recognized as a saint long before the Vatican declared him as such in 1297.

Collect for Louis of France
O God, who called your servant Louis of France to an earthly throne that he might advance your heavenly kingdom, and gave him zeal for your Church and love for your people: Mercifully grant that we who commemorate him this day may be fruitful in good works, and attain to the glorious crown of your saints; through Jesus Christ our Lord, who lives and reigns with you and the Holy Spirit, one God, for ever and ever. Amen. 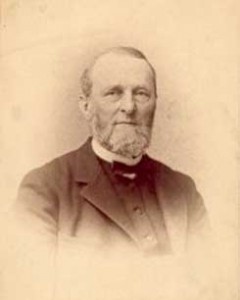 Along with his father and brother, Thomas Gallaudet played a leading role in establishing deaf education and promoting the advancement of the Deaf in the United States throughout the nineteenth century. (The capitalized “Deaf ” is used when referring to Deaf culture, as opposed to “deaf ” to describe hearing loss). His father, Thomas Hopkins Gallaudet, co-founded the first School for the Deaf in America. His brother, Edward Miner Gallaudet, became the principal of what is now Gallaudet University, the first to offer college degrees to the Deaf.

Both his mother and his wife were Deaf, and Thomas Gallaudet was fluent in sign language from childhood. At that time, no one recognized signing as a language. Most people considered sign merely crude gestures; it wasn’t formally recognized as a language until the 1960s.

Gallaudet first taught at his father’s school in Connecticut, then at the New York Institution for Deaf Mutes. While there, he began teaching Bible classes to the Deaf as he studied for the ministry. Shortly after his ordination as an Episcopal priest in 1851, he established St. Ann’s Church, the first congregation in any denomination for the Deaf. Services were both spoken and signed and were free to all in a time when pew rent was the norm. Beginning in 1859, he expanded this ministry to other cities.

Throughout the 1800s, a fierce battle raged over whether the Deaf should be allowed to sign or not. The 1880 Milan Conference of Deaf Educators declared oral instruction (teaching speech and lip-reading) superior to sign and voted to ban the use of all manual instruction in deaf education.

Gallaudet managed to maintain a generous spirit, working with people across the spectrum of the issue while continuing his advocacy. Although incorporating oral instruction in his work, he continued to offer signed services and interpreted at churches throughout the country. He promoted Deaf candidates for the priesthood. In fact, the first Deaf priest, Henry Syle, shares Gallaudet’s feast day. And he helped the Deaf establish their own institutions to care for their community. Gallaudet changed people’s minds about what the Deaf can do. Throughout his ministry, he gave his personal testimony, telling those with ears to hear “that signs can make up a real, living language as well as sounds. If this be so, the imparting of the sacramental life, according to our Lord’s appointment, cannot surely be limited to the latter.”

Collect for Thomas Gallaudet
O loving God, whose will it is that everyone should come to you and be saved: We bless your Holy Name for your servants Thomas Gallaudet and Henry Winter Syle, whose labors with and for those who are deaf we commemorate today; and we pray that you will continually move your Church to respond in love to the needs of all people; through Jesus Christ, who opened the ears of the deaf, and who lives and reigns with you and the Holy Spirit, one God, now and for ever. Amen.

140 comments on “Louis of France vs. Thomas Gallaudet”