The photograph vs. the icon points to the 800 years standing between these two giants of monasticism, Thomas Merton and Aelred of Rivaulx. And by "standing" we mean amid the blue grass of Kentucky for the one and among the moors of North Yorkshire, England for the other.

While we generally try to keep any Celebrity Blogger bias out of the contests, it should be noted that Laurie Brock hails from Kentucky and Robert Hendrickson is, well, an Anglophile. He also cleverly used a Merton quote in support of Aelred. So subplots abound!

In yesterday's Lent Madness action, Thomas Gallaudet trounced Louis of France 78% to 22%. King Louis was last seen muttering something about "eating cake." And, as we highlighted late in the day, Lent Madness also received some more media attention.

If you're still looking for some ways to use Lent Madness as a series for adults, the Rev. Anne Emry has some very helpful ideas on her blog Sacred Story. Since she serves as the Assistant Rector at St. John's in Hingham, Massachusetts (where Tim's the rector), she has an inside track on all the latest Lent Madness "gossip." 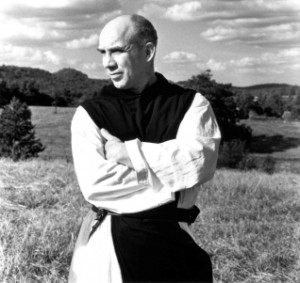 Outside Bardstown, Kentucky, on acres of land, sits the Trappist Monastery that would likely be obscure except for one man. Thomas Merton entered the monastic life there in 1941, after a long, wandering, and sometimes turbulent life.

Born in France, Merton experienced frequent moves, the death of his mother, and the absence of his father. After his father died in 1930, Merton rejected the nominal Anglicanism into which he’d been baptized and became an agnostic. His later writings recall Merton being drawn to observe Mass, but he made no formal excursion into religion until 1937, when Étienne Gilson’s explanation of God in The Spirit of Medieval Philosophy resonated with him, and he was introduced to mysticism in Aldous Huxley’s Ends and Means. A year later, Merton joined the Roman Catholic church; two years later, he began the process to become a Franciscan monk. Later, Merton was told he was not a suitable fit for the Franciscans. After a retreat at the Trappist Abbey of Gethsemani in Kentucky, Merton found his spiritual home—and became known as Brother Louis.

Merton’s superior at Gethsemani encouraged Merton’s writing. He first published poetry. His spiritual autobiography The Seven Storey Mountain was published in 1948 and immediately became a spiritual classic. A prolific writer, Merton became increasingly well-known outside the walls of the monastery, which created some tension within his monastic community.

Merton’s writings and correspondence with global figures show a man whose spirituality became connected to issues of social justice, nonviolence, racial equality, and a deep life of contemplation. As his fame grew, he moved into a hermitage on the grounds of Gethsemani, which is still available for monastic solitude. Merton died on December 10, 1968 by accidental electrocution in Thailand while on pilgrimage in the Far East.

One of Merton’s epiphanies is commemorated by a plaque at the corner of Fourth and Walnut streets in Louisville, Kentucky. Noted in his private journal and included in his book Conjectures of a Guilty Bystander, Merton writes:

“I was suddenly overwhelmed with the realization that I loved all those people, that they were mine and I theirs, that we could not be alien to one another even though we were total strangers. It was like waking from a dream of separateness...The whole illusion of a separate holy existence is a dream.”

Merton’s vision of the unity of all continues in his writings, treasured by people of many faiths, and even people of no professed faith, across the world, bound together by these mystical experiences of Brother Louis.

Collect for Thomas Merton
Gracious God, you called your monk Thomas Merton to proclaim your justice out of silence, and moved him in his contemplative writings to perceive and value Christ at work in the faiths of others: Keep us, like him, steadfast in the knowledge and love of Jesus Christ; who with you and the Holy Spirit lives and reigns, one God, for ever and ever. Amen. 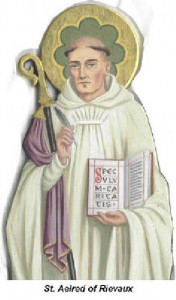 Aelred of Rievaulx was a learned monk of manifold gifts and spiritual depth. He was born in 1110 and was the son, grandson, and great-grandson of priests (born in Scotland, which had resisted papal insistence on celibacy for clerics). Aelred served the court of King David I of Scotland and developed a close bond with the king.

After about a decade working in the court, Aelred left for England and a monastery at Rievaulx. There are competing historical narratives about Aelred’s decision to join the Cistercians monks. In some narratives, the decision was literally overnight, and in other accounts, he spent long years yearning for a monastic life. In any case, his connections and friendships enabled him to become not only a gifted monk and abbot but also an influential advocate for the monasteries and the faith.

Lent Madness 2014 rival saint Thomas Merton wrote of the order, “The Cistercians of Saint Bernard’s generation had become one of the most important influences in the active life of the Church and even in European politics of their time. . . Anyone who had any talent or, worse still, any powerful connections, was likely to find himself in danger of leading an increasingly active life.” With Aelred’s gift for languages and knowledge of courtly diplomacy, he became integral to the order’s influence in both the Church and the Kingdom.

Aelred was not only skilled in the worldly affairs of his community. He was also a gifted writer and pastor. He wrote extensively and learnedly but also with directness and simplicity on matters historical, ascetical, and spiritual. He had an able mind and a pastoral heart. Aelred’s writings convey the depth of his friendships as well as his longing for closer and richer community. He wrote in Spiritual Friendship, “...the friend will rejoice with my soul rejoicing, grieve with it grieving, and feel that everything that belongs to a friend belongs to himself.”

Aelred was elected as abbot and his true legacy is in creating a community famed for its welcome of all. One historian wrote, “It is the singular and supreme glory of the house of Rievaulx that above all else it teaches tolerance of the infirm and compassion for others in their necessities.” Upon his death, Aelred was buried in a shrine, which became a renowned pilgrimage site. The shrine survived until the violence of the dissolution of the monasteries under Protestant rule.

The Collect for Aelred
Almighty God, you endowed the abbot Aelred with the gift of Christian friendship and the wisdom to lead others in the way of holiness: Grant to your people that same spirit of mutual affection, that, in loving one another, we may know the love of Christ and rejoice in the gift of your eternal goodness; through the same Jesus Christ our Savior, who lives and reigns with you and the Holy Spirit, one God, now and for ever. Amen.

137 comments on “Thomas Merton vs. Aelred”