In a 2014 bracket quirk, Celebrity Blogger Heidi Shott is shepherding her "Killer B's" through the Saintly Sixteen this week. Bach, Bedell, and Brooks are all doing battle over the next few days. Today we begin Heidi Week with J.S. Bach taking on Anna Cooper in a contest between an activist and a musician. One key to this contest will be the critical bassoonist vote. Will they rally behind a fellow musician or take umbrage with one of their own once being called a "nanny-goat bassoonist?"

Yesterday, in a tight race, Harriet Beecher Stowe managed to hold off Alcuin 53% to 47% and will face the winner of Harriet Bedell vs. Thomas Gallaudet in the Elate Eight.

Don't forget, you can always find links to the match-ups of the previous rounds on the Bracket page. Can't remember where Anna Cooper grew up? Need a reminder about the number of children J.S. Bach sired? Go look it up and become a better informed Lent Madness voter.

PS. Your shoelaces are untied. 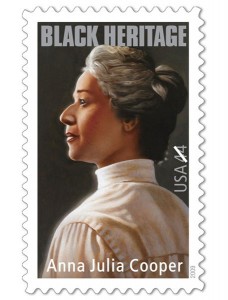 Anna Julia Cooper -- the daughter of an enslaved women and a white slave master – was an educator and tireless advocate for the rights, dignity, and opportunities of women and people of color during the early twentieth century. Anna's cause was not only about empowering women, it was also about ensuring the dignity of the entire human race as a reflection of God’s likeness. Nevertheless, she recognized that black women had a unique perspective on the matter because of their sex and race. As she explained,

The colored woman feels that woman's cause is one and universal; and that not till the image of God, whether in parian or ebony, is sacred and inviolable; not till race, color, sex, and condition are seen as the accidents, and not the substance of life; not till the universal title of humanity to life, liberty, and the pursuit of happiness is conceded to be inalienable to all; not till then is woman's lesson taught and woman's cause won -- not the white woman's, nor the black woman's, nor the red woman's, but the cause of every man and of every woman who has writhed silently under a mighty wrong.

She fearlessly chastised Christians for being complacent about injustice and advocated for greater recognition of the immeasurable value of women. In her well-known work, A Voice from the South, she wrote:

The earnest well-trained Christian young woman, as a teacher, as a home-maker, as wife, mother, or silent influence even, is as potent a missionary agency among our people as is the theologian; and I claim that at the present stage of our development in the South she is even more important and necessary.

Never one to back down from a challenge, she had pursued the “gentlemen’s” course of study at Oberlin College over the more genteel program for women. After many years as a teacher, principal, and advocate, at the age of 57, she adopted her nephew’s five children while simultaneously working toward her PhD.  (So, yes, we know you just celebrated your 80th birthday Gloria Steinem, but Anna Cooper could run circles around you. Did you get a PhD at 67? I don’t think so).

In a time when women were expected to be quiet and people of color were threatened with violence, Anna refused to succumb to fear or comfort. Instead, she relied upon education and Christian compassion over violence, a lesson from which the short-tempered, bassoon-fighting Bach could have benefited. (So much for turning the other cheek, eh?)

Anna died in 1964 at the age of 105. In 2009, the Anna Julia Cooper Episcopal School in Richmond, Virginia, opened in her honor and provides a faith-based education to students of limited means. 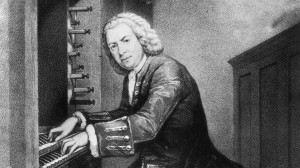 Over the years I’ve known many 18 year-old males and, indeed, felt a great fondness for a number of them, but I can assure you that I don’t recall one -- even the musicians among them -- ever saying anything like this: “The aim and final end of all music should be none other than the glory of God and the refreshment of the soul."

Still, despite the odds, such were the words uttered by Johann Sebastian Bach, a young church organist in Arnstadt, Germany, in 1703. Indeed, Bach signed hundreds of his church compositions and some of his secular works with the initials S.D.G., an abbreviation for the Latin term Soli Deo Gloria meaning “Glory to God alone.”

While many of the saints who find their way into the bracket have left behind theological treatises, sermons, devotional poetry, and other writings, Bach left behind little written work to demonstrate his faithfulness. David Mendel argues in The Bach Reader, “For the expression of emotion, however, Bach hardly needed to resort to words. The focus of his emotional life was undoubtedly in religion, and in the service of religion through music...That his church music was designed to deepen the worship of God and to embellish His service need not be emphasized.”

It is not just Bach’s many biographers who see the hand of God in how Bach offered his gifts to the world. Words of praise from other composers, contemporary through the present day, abound. Claude Debussy said famously, “And if we look at the works of J.S. Bach — a benevolent god to which all musicians should offer a prayer to defend themselves against mediocrity — on each page we discover things which we thought were born only yesterday, from delightful arabesques to an overflowing of religious feeling greater than anything we have since discovered.”

Faithful Christian and musical genius though he was, Bach seems to have admitted to a few human foibles. His short comic opera on the pleasures of coffee-drinking, Schweigt stille, plaudert nicht (Be still, stop chattering), was performed regularly at a coffee house in Leipzig. We have record of two other of his habits -- a penchant for smoking tobacco and writing poetry -- in a collection he dedicated to his second wife, Anna Magdalena, in "The Second Little Clavier Book.” One verse reads:

How oft it happens when one’s smoking:
The stopper’s missing from its shelf,
And one goes with one’s finger poking
Into the bowl and burns oneself.
If in the pipe such pain doth dwell,
How hot must be the pains of Hell.

A bit of a wag, Bach once said, “It's easy to play any musical instrument: all you have to do is touch the right key at the right time and the instrument will play itself.” But he also said, “Music is an agreeable harmony for the honor of God and the permissible delights of the soul.”