We can't call this the "long-anticipated" Battle of the Harriets since, be honest, did anyone predict Harriet Bedell to make it to the Elate Eight? Nonetheless, we have a match-up rivaling the earlier Battle of the Catherines (of Alexandria vs. of Siena) plus we have a better name: Welcome to Harriet Havoc! Which Harriet will prevail? Well, that's up to you.

To get to this point, upstart Harriet Bedell bested Samuel Isaac Joseph Schereschewsky and Thomas Gallaudet while Harriet Beecher Stowe sent James Holly and Alcuin packing. Check out all the previous action and brush up on on your Harriet(s) trivia by clicking the bracket page and scrolling down to see their respective earlier match-ups.

Yesterday in the third hotly contested battle in as many days (it's been quite the week around here!), Phillips Brooks defeated (or should we say flexed his "mite" over) Julia Chester Emery 51% to 49%.

Be sure to watch the daily Archbishops' Update, and if there's someone out there who hasn't liked us on Facebook, get to it. We're pretty sure there are more than 9,762 Facebook subscribers out there. Don't make us contact Zuckerberg to confirm this. Here's the latest from the Archbishops: 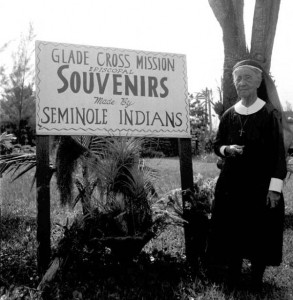 When you look this photo of Deaconess Harriet Bedell standing before a sign for the Glade Cross Mission, you can be forgiven for reading it as “Episcopal Souvenirs” instead of “Glade Cross Mission-Episcopal.” Considering the tireless work she offered for 27 years as a missionary to the Seminole people in southwest Florida, it’s possible to see that it could be true no matter how you read it.

Marion Nicolay, who offers historical re-enactments as Bedell, explains how the Deaconess worked to ensure that the tribal members benefited from the income derived from their handicrafts. She would take a loan from the Collier Corporation, then pay the tribal members for their work with script from the company’s store. She would sell the crafts in the mission shop to tourists and then pay off the loans and use the excess for tribal support and to buy big items like sewing machines. She paid her $20 monthly rent for the mission buildings out of the $50 monthly salary she received as an Episcopal Church missionary. Eventually the Collier Corporation deeded the property to the church. Nicolay, acting as Bedell in the 50-minute video, quips, “I found that I was the middle man for the tribe. That was never in my deaconess job description.”

During the Depression, Bedell drove her Model A to Washington, D.C. to lobby officials to protect the Seminoles’ handicrafts from being undercut by foreign, cheaply-made knock-offs. She accosted leaders at the Department of Labor (possibly Frances Perkins) and the American Trade Authority. She even showed up at the Japanese Embassy to offer a piece of her mind on the subject of replica goods. Ultimately the U.S. Government put a halt to such imports. 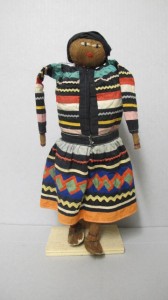 While in D.C. she got the idea to drive up to New York City to pitch the department stores like Saks and Bergdorf Goodman to see if they would place orders for Seminole crafts. As the Depression deepened and the tourists stopped visiting Florida, the orders from New York stores kept some money coming in. The Deaconess had some pretty good ideas. 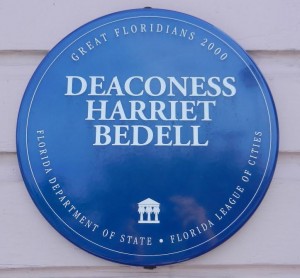 communities. In 2000 she was named a “Great Floridian” by the Florida Department of State. A commemoration plaque is mounted at the front door of the Museum of the Everglades. 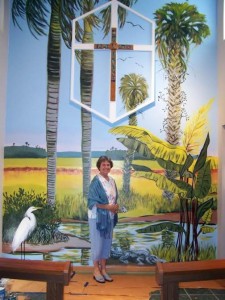 St. Mark’s Episcopal Church on Marco Island established the Bedell Chapel to honor her life and ministry. Local artist Hannah Ineson painted this gorgeous mural depicting the Everglades - complete with alligator -- behind the altar of the chapel. (Here’s a crazy Episcopal thing for those of you who like crazy Episcopal things: Hannah’s husband John is the priest who baptized our sons and was a long-time rector of St. Andrew’s in Newcastle, Maine, which, get this, was Frances Perkins’ summer parish). 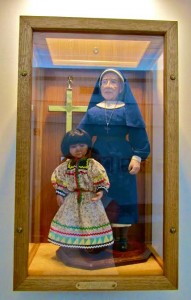 retire. She brokered a deal where she would get $50 a month in pension (eerily similar to her salary) and be allowed to carry on with her ministry as long as her health held out. She served for another 17 years and was often quoted as saying, “There is no retirement in the service of the Master.”

Perhaps it was inevitable that someone who worked so hard to improve that lives of the people she served, not least by helping to improve the quality of their handcrafted dolls, would one day have a doll created in her likeness. On display at St. Mark’s is the cross from the Glade Cross Mission that survived Hurricane Donna as well as a doll depicting a Seminole child and the Deaconess herself. 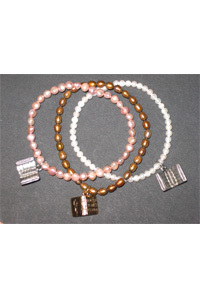 I know that one of the problems that plagues you, the Lent Madness voter, is a crippling loneliness -- a fear that you might one day be without Harriet Beecher Stowe. Well, I am here to tell you -- that day will never, ever come, because she is everywhere.

Do you want to always remember her most influential work? Why not wear it around your wrist! 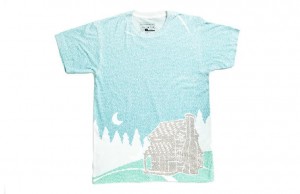 How about as a t-shirt? You can do that too! Every blessed word, printed artfully on a tshirt!   (This is actually an incredibly cool idea, and money goes to promote literacy around the world).

Note: Uncle Tom's Cabin has so much merchandise behind it, that, were you to contemplate it all,  your head would explode. The book was so popular, that for the first time, diverse companies jumped 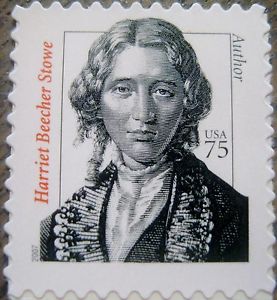 on its popularity to sell their own products -- from lamps to playing cards to hankerchiefs, etc. If it was possible to stamp Eva and Tom on a thing, it was done, and so Uncle Tom's Cabin was the first mass marketed work of art in Western culture, and all without licensing agreements, so poor Harriet never saw a dime extra. If you're interested, however, there's an excellent roundup here. 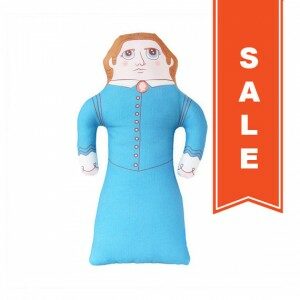 But this is distracting us from dealing with all things Beecher Stowe. Do you need to mail a strongly worded, yet eloquently phrased letter to your congress person? Harriet postage stamps to the rescue!

When night comes, are you seized by fits of anxious indecision and moral turpitude? Don't worry! You can buy a Harriet Beecher Stowe stuffed doll to counsel you! (and it's on sale!). 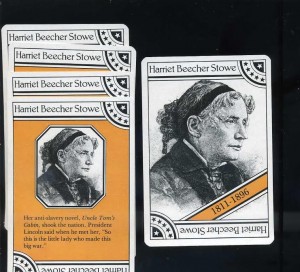 But most of all, you require what everyone does. When you're out with your friends, you need something to show them. Something to hand them, to guide them to a saintly path.

I give you, Harriet Beecher Stowe trading cards!  Suitable for trading, collecting, or distributing to wayward individuals.